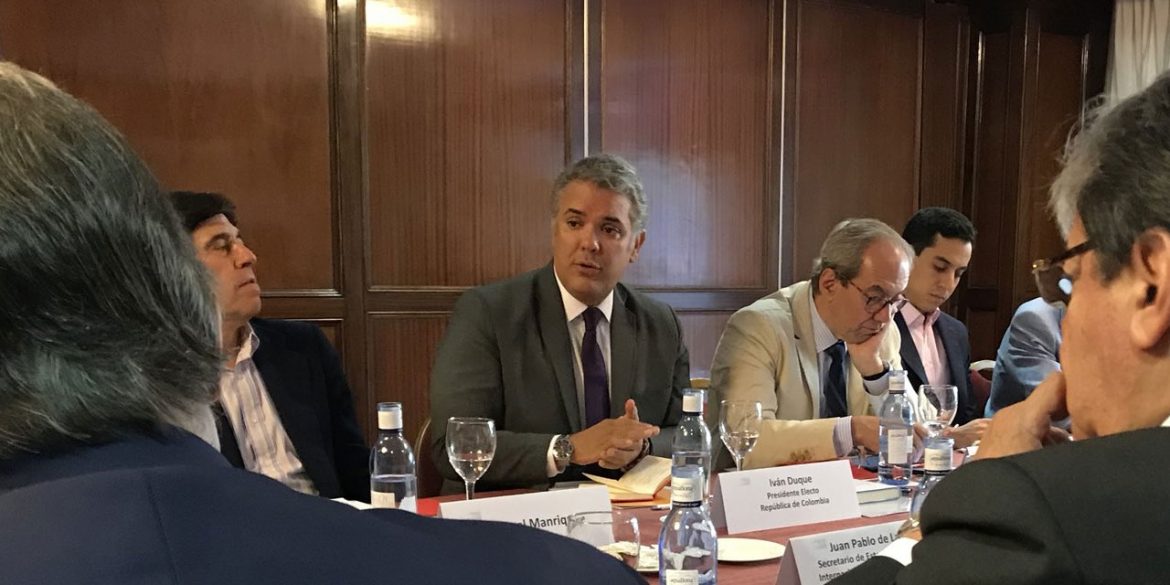 Duque won the elections last month and will assume power on August 7, months after his predecessor Juan Manuel Santos presented the lowest homicide rate in recorded history after signing peace with FARC guerrillas in 2016.

Displacement dropped to levels unseen since 1995 under the outgoing president.

Nevertheless, Duque said that “we are receiving a country with many adversities, which has seen the increase of coca crops, an increase in violence against social leaders, and illegal mining.”

The president-elect and his hard-right Democratic Center party, however, have consistently opposed the peace process, ongoing negotiations with ELN guerrillas and a less repressive strategy to curb the cultivation of coca, which reached record levels in 2017, according to the United Nations.

The growing of illicit crops “has become the main element to finance organized crime, with the ‘Clan del Golfo,’ with the FARC dissidents,” said Duque, contradicting reports that gold has overtaken drugs as the illegal armed groups’ main cash cow.

“This recovery of security will be an obsession from the first day in government,” the president-elect told the news agency.

Despite the evident security benefits of the FARC’s demobilization of 14,000 people, Duque vowed to “correct things that are done wrong” in the fragile process.

The 41-year-old conservative was elected on the promise that he unilaterally would make significant changes to the peace deal including the introduction of punishment for drug-related crimes and the effective removal of FARC leaders convicted of war crimes from Congress.

Duque vowed that through his policies he will improve the country’s “mediocre” growth and the “social programs that have lost effect because of the lack of proper management.”