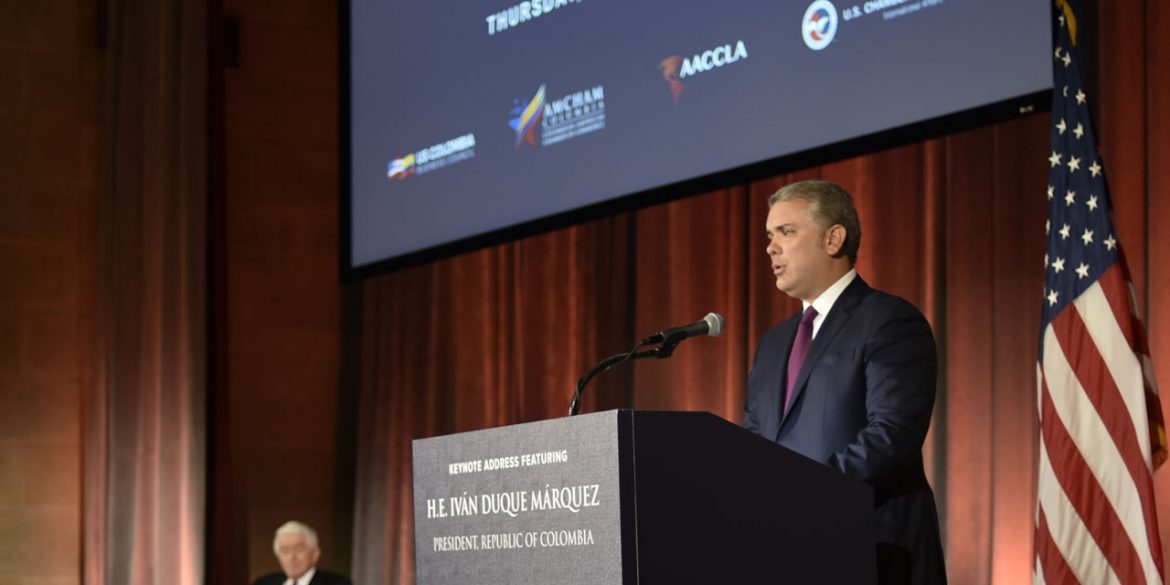 Duque woos investors while in US

Once the ceremonial meetings with United States government officials were over, Colombia’s President Ivan Duque was able to turn his attention to an agenda where he might have some influence: effort to increase US investment and exports to the US.

Duque’s Wednesday meeting with President Donald Trump drew the early attention, including an inevitable mini-media-frenzy over the dresses the two presidential wives wore to the four-person photo op.

But there isn’t much Duque can do to influence Trump’s foreign policies. National Security Adviser John Bolton sets the rules and Colombia follows orders regarding Venezuela and cocaine, the two things about Colombia the US government cares about the most.

Then on Thursday, Duque began meeting with US business executives, his primary target. He spoke to an audience of about 200 people at the US Chamber of Commerce headquarters.

The purpose of the business summit was to “facilitate greater investment and strengthen the commercial relationship between the two countries,” said Maria Claudia Lacouture, president of AmCham Colombia, a bi-national business development group which co-sponsored the event.

Duque praised the US-Colombia Free Trade Agreement, but also complained about the difficulties Colombian businesses have accessing the US market.

“It took us four years to gain access for Hass avocados, and we want access to the North American market in less time than that,” Duque said, according to his office.

Duque also delivered the now-traditional Colombian praise and thanks for the nearly 20 years of US participation in Plan Colombia, which has delivered about nine billion dollars in military aid to his country. He emphasized the bi-partisan support in the US Congress for Plan Colombia, which was begun by Democratic President Bill Clinton and continued through subsequent Republican and Democratic administrations.

“Colombia is a magnificent example of what can happen when Republicans and Democrats work together with us to make important changes,” Duque said, an obvious reference to the notorious inability of the two parties to find common ground in the US Congress and in politics nationwide.

In his contacts with US government officials, Duque also met briefly with Nancy Pelosi, the Democratic Speaker of the House; Mitch McConnell, Republican Majority Leader of the Senate; and members of the House Appropriations Committee and the Senate Foreign Affairs Committee.

Friday’s schedule includes a meeting of the Organization of American States, which is headquartered in Washington. Venezuela will be the main topic there.

Then he’ll travel to New York City for meetings with international bond-rating agencies and other Wall Street leaders. Saturday he’ll meet with Colombian business people who live in the US, before returning to Bogota.