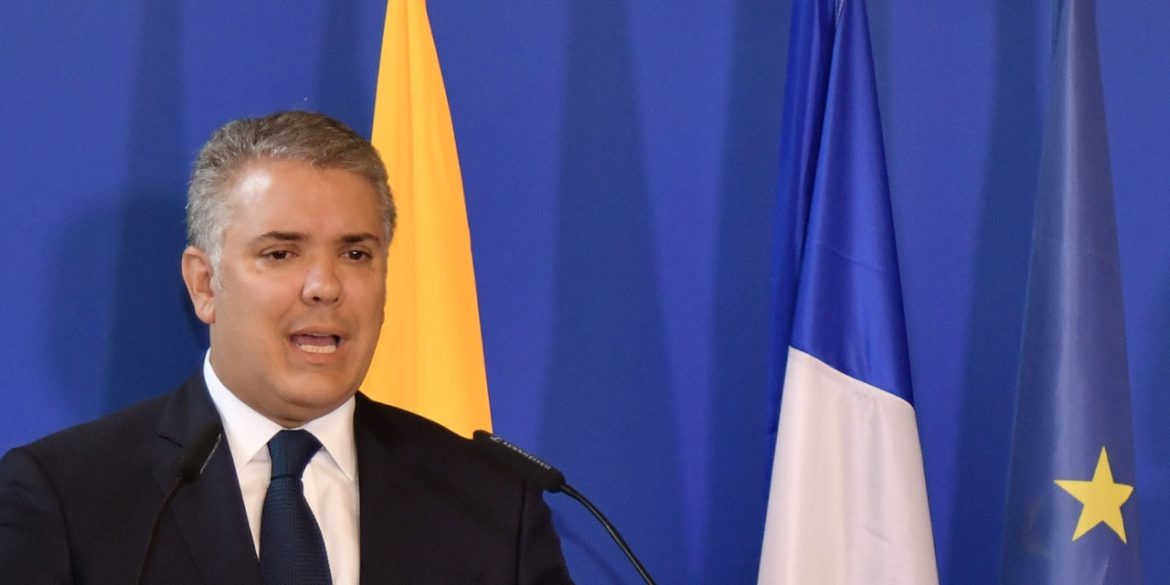 Duque returns from trip to Europe marred by protests and scrutiny

On his return from Europe Colombia’s President Ivan Duque said he received support from French leader Emmanuel Macron and British parliament, despite bipartisan criticism in both countries.

In a statement released on Sunday, Duque said that Macron and British parliament “recognized Colombia’s efforts to implement peace.”

However, the main takeaway from his trip is that European politicians overwhelmingly support the peace deal as it is, and fiercely oppose the efforts of the President and his far-right party, the Democratic Center, to undermine it.

Neither UK Prime Minister Theresa May nor Macron made statements after their meeting with Duque, but lawmakers from both parties blasted the president’s failures to implement the 2016 peace deal with FARC rebels.

In France, Switzerland and the UK, the president was confronted with protests, with demonstrators shouting “murderer” at him as he made his way to Downing Street to meet with May.

In addition to public protests, representatives from both France and Britain were scathing in their assessment of his policies. Both expressed concern that his leadership was endangering the peace process, which they described as “fragile”, and singled out the killings of social leaders and his attitude towards the transitional justice system as particular causes for concern.

The French Senate’s External Affairs, Defense and Armed Forces Committee released a report that criticizing how under Duque “the application of the agreement has been delayed, the investments haven’t come through, the agreed redistribution of land hasn’t taken place and stolen territories have not been returned.”

The report also criticized the neglect of rural Colombia, lamenting how “there are areas where the state does not exist”, going on to argue that these problems could lead to rearmament.

In the UK parliament, negative attitudes to Duque were plainly visible during a parliamentary debate led by Labour MP Jo Stevens. Stevens, who visited Colombia in 2018, blasted Duque for lying about the issue, dismissing his claim of a 32% drop in social leader assassinations as “directly contradicting reports from human rights organizations”.

Across the aisle, Jim Shannon, MP for the ultra-conservative Northern Irish unionist party the DUP raised concerns about the ongoing prevalence of paramilitaries in Colombia and their role in assassinating activists. His constituency, Strangford, sits on the outskirts of Belfast, a city which saw 1,600 deaths from clashes between paramilitaries between 1969 and 2001.

They think they are above the law…if the peace process is to advance, we have to know that those in power are doing all they can to stop them.

Across the English Channel, the French Senate Committee also lamented the violence, which saw 59 social leaders killed in the first four months of 2019. Their report called for the international community to “pressure the Colombian state to commit resources to fighting these killings”, also arguing that “the government and police could without a doubt do more to protect these people.”

Alan Duncan, the UK’s Minister for the Americas who met Duque for a banquet during his visit, was overtly critical of the president’s attempts to delay the coming into force of the country’s war crimes tribunal. According to Duncan, Duque’s efforts  “systematically undermine transitional justice since his election.”

The French senators were similarly concerned, and implored Duque to accept the transitional justice system and stop seeking means to limit its powers.

Their report advised Duque that “it is already settled, the law is in place” and conveyed their view that “it is absolutely necessary that the government does not question the law.”