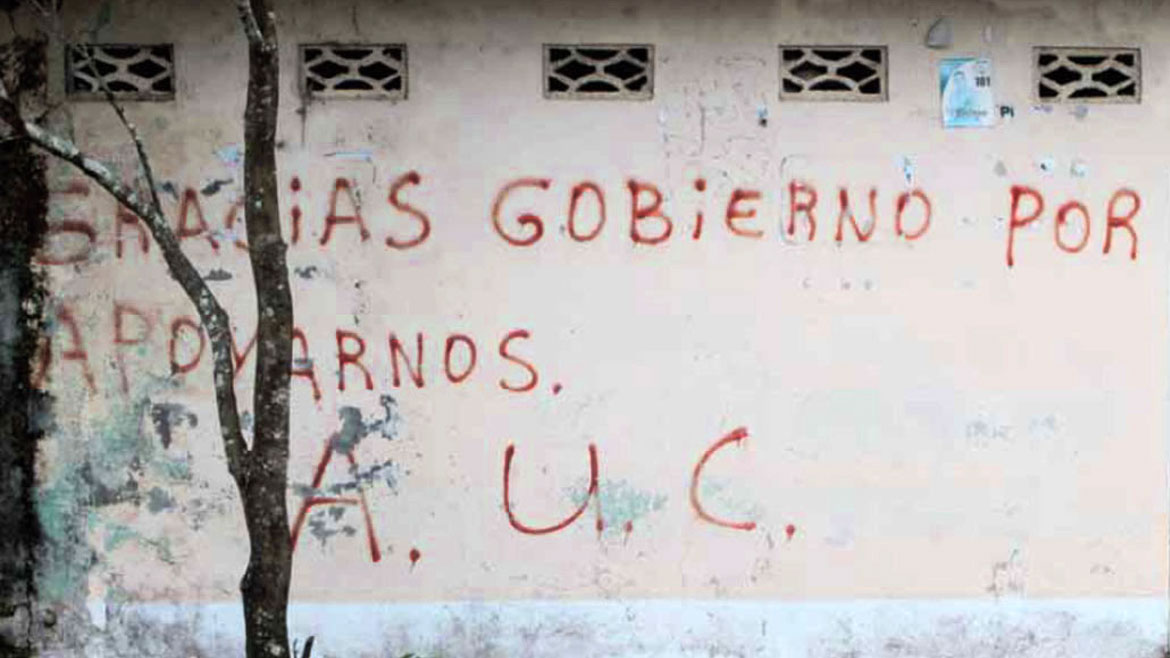 AUC graffiti saying "Thank you, government, for supporting us."
War and peace

During the swearing in of a new transitional justice magistrate, Duque rejected “politically and electorally corrupt figures who try to seek tickets to enter the Special Justice for Peace.” (sic)

The Special Jurisdiction for Peace (JEP) is studying the request of multiple convicted politicians and former commanders of now-defunct paramilitary organization AUC to submit to the transitional justice system.

Duque’s concerns about the JEP

The JEP took force in 2018 as part of a peace process with the demobilized FARC guerrilla groups, primarily to try former guerrilla leaders and military commanders, who are shielded from going to prison if they fully cooperate with the court.

The president, his far-right Democratic Center party and his political patron, former President Alvaro Uribe, have fiercely opposed the peace process and on multiple occasions have tried to sabotage the court.

Duque is now opposing the possible participation of the AUC who backed the 2002 election of Uribe and dozens of congressmen when the president’s late father was in charge of the vote.

There are criminals from the United Self-Defense Forces of Colombia who are seeking, at all costs, with all kinds of pressures, to legitimize their desire to enter the transitional justice system, so that they themselves can enjoy the benefits of release from prison or, even more serious, enjoy the principles of non-extradition.

Duque’s political patron, former President Alvaro Uribe, successfully impeded the effective cooperation of demobilized AUC commanders with the Justice and Peace tribunal by extraditing them to the United States in 2008.

Some of the extradited warlords ended collaborating with the transitional justice system that was part of the paramilitaries’ demobilization process after the assassination and intimidation of their family members.

Others were unable to submit to Justice and Peace because their groups did not formally take part in the AUC’s demobilization between 2003 and 2006.

The warlords’ testimonies about their ties to Colombia’s political elite, including Uribe, led to the imprisonment of more than 60 former congressmen and at least nine former governors.

The testimonies of other paramilitaries triggered a criminal investigation against Duque’s political patron over his alleged complicity in three massacres and a homicide.

The JEP rejected the request of the AUC’s former Northern Bloc commander, Rodrigo Tovar, to be allowed to submit to the transitional justice system in February.

Tovar, who returned to Colombia last year, was stripped of his judicial benefits after his brother was assassinated in 2009.

Mancuso has continued to cooperate with “Justice and Peace” despite alleged attempts to intimidate and harass his family, which has created the possibility of him collaborating with the JEP.

The transitional justice court ruled out that the AUC’s former top commander could not be granted judicial benefits, however.

Other former AUC commanders have committed to contributing to the Truth Commission, which is set to release its report later this year.

This commission is no legal body, but does shield war criminals from being prosecuted by the ordinary justice system for crimes admitted before its investigators.

If these crimes involve politicians or businessmen, testimonies would be sent to courts for criminal investigation.