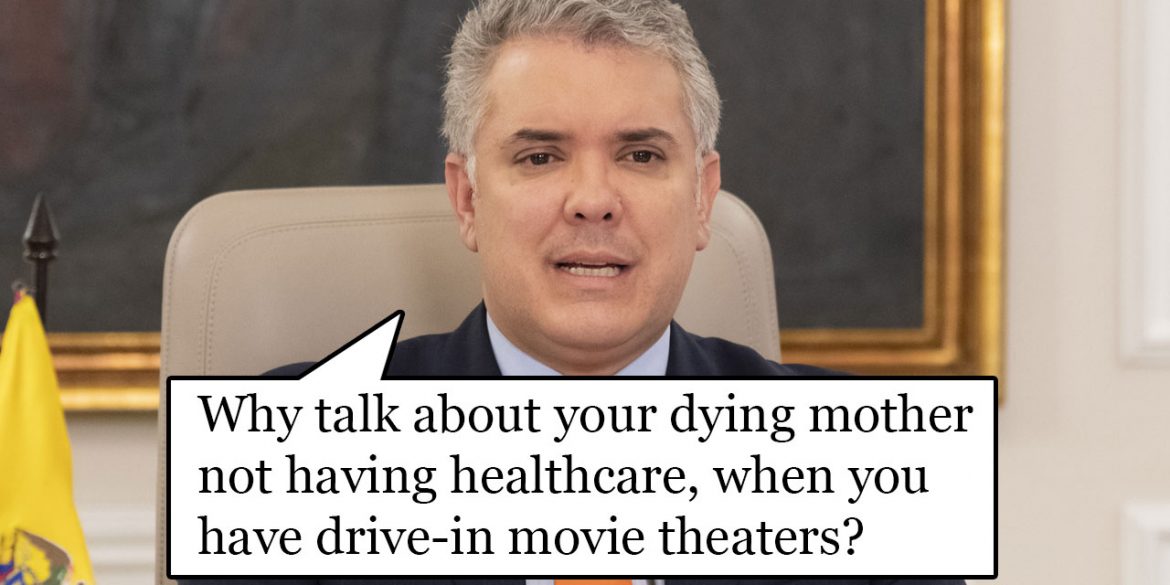 Confronted with a record number of COVID-19 deaths, Colombia’s President Ivan Duque said Wednesday it was important to highlight other statistics and drive-in theaters.

Argentine newspaper Clarin reported on Wednesday that “Colombia is the new epicenter of the coronavirus in Latin America,” stressing that the accelerating number of infections and deaths are “out of control.”

During his daily COVID show on Facebook, Duque admitted that the record 380 fatalities reported by the National Health Institute (INS) “is a high number compared to previous days. But, also, it is important to highlight there is a territorial concentration, 77% is in five cities.”

To the despair of the country’s healthcare workers who are risking their lives to save others, the president is ignoring the worst healthcare crisis in more than a century, the medical community blames on him.

Healthcare in the capital Bogota all but collapsed last week already, while the acting governor of Antioquia, of which Medellin is the capital, declared a red alert on Thursday.

In Colombia they did a very fast opening. In Europe this was done after the peak and they did it gradually, but here we have not passed the peak and we have 43 economic sectors in the street.

On Tuesday, Colombia registered the fourth highest number of daily infections, trailing only behind the United States, Brazil and India.

The president apparently wouldn’t let dying Colombians ruin his announcement that he had authorized the opening of drive-in theaters in the lock-down that will be in place until August 31.

Health Minister Fernando Ruiz also avoided the municipal healthcare collapses, but stressed that “Colombia, despite the challenges, has improved the home delivery of medicines by a ratio of 1 to 8 in the last two months, and has increased its capacity for home-based care tenfold.”

While Duque and his health minister spend their time on Facebook ignoring the crisis, health workers and local authorities are left to fend for themselves.