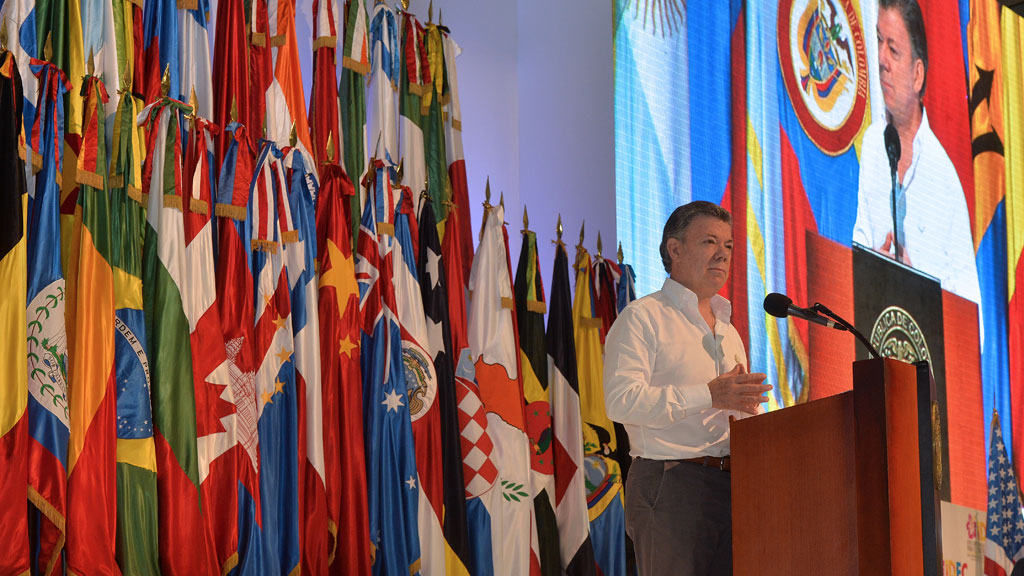 Colombia’s President Juan Manuel Santos told attendees of the International Conference on Drugs on Tuesday that a new approach and a global consensus is essential to overcoming drug trafficking and abuse.

Cartagena this week hosts 127 countries with 400 representatives from across the world, including officials from the US DEA, the UN and US Southern Command. The conference, organized by the Colombian National Police was opened on Tuesday by Colombia’s Chief of Police General Rodolfo Palomino and will run for 3 days.

President Juan Manual Santos reflected on the experiences of Colombia and achievements in dismantling the large cartels and drug seizures that have been made with billions of dollars spent on the war, stating that the results have been “insufficient.”

Statistics show that coca cultivation went up approximately 20% last year, according to the country’s Minister of Defense. This comes as a result of the emerging drug trafficking groups, most stemming from the AUC paramilitary group.

Recent advancements include this month the ban on the controversial use of the chemical Glyphosate in aerial fumigation and the exploration of alternative solutions. This comes admist Colombian governement peace talk developments with rebel group the FARC which specify a discontinuation of drug trafficking, a process that has funded the guerrilla organization.

Santos has stated “A comprehensive drug policy involves promoting a culture of legality that allows us to overcome the ‘anything goes’, the cult of Mafia and violence that has stimulated drug trafficking in many countries, in many societies.”

This approach, he claims, should be one that recognizes “all links in the drug trafficking chain differentiated.” He proposed solutions including the legalization and prevention of drugs, the eradication of crops by farmers voluntarily through crop substitution, fighting criminal organizations and a deepening of international co-operation.

In May Colombia’s Justice Minister Yesid Reyes called on the United Nations to debate radical changes in global drug policies, including the decriminalization of drug use and softer punishment for minor drug trafficking offenses. These ideas were previously also suggested by Colombian President Juan Manuel Santos before the Organization of American States.

In his speech on Tuesday the President referenced advancements made in the Special Assembly of drugs of OAS in 2014, highlighting effective decisions that were made in the ability to change public policy, alternatives to prison time for minor offenses and recognizing this is a public health problem as alongside the continuation in the battle against criminal organizations.

Santos furthermore called for an open mind in the Special Assembly of the UN next year that will be dedicated to the global drug problem.