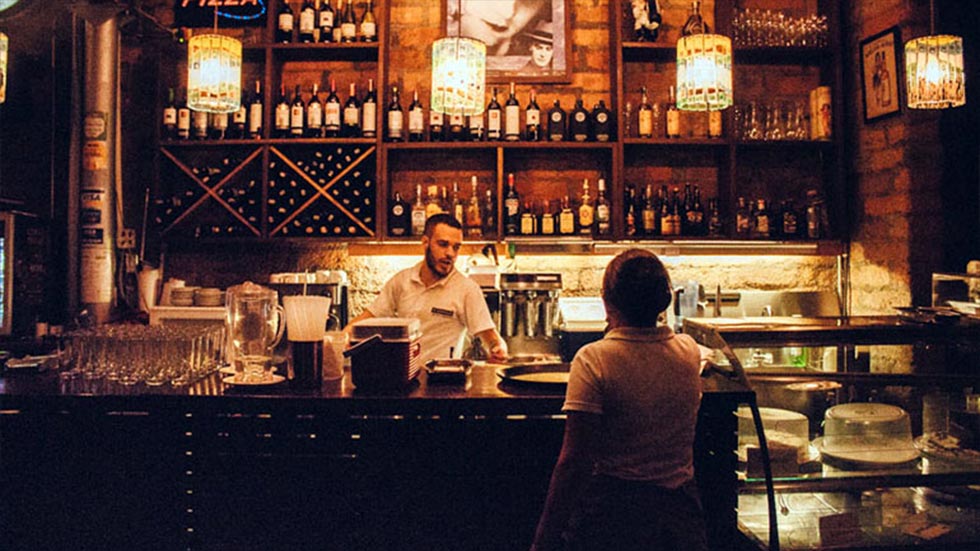 Medellin‘s downtown area has a bad rep. The center has the city’s highest murder rate, robbery rate and pretty much every other rate nobody wants. Paradoxically, it’s also a lot of fun.

Unlike other nightlife areas in Colombia’s second largest city, the downtown area is not full of clubs uniformly blasting reggaeton or popular sing-alongs. Instead, it has slowly recovered its #1 spot as the city’s cultural center and multi-cultural melting pot.

Instead of clubs, the area around Parque Periodista is filled with small bars, theaters and pubs that allow you to have a beer or a rum while enjoying a conversation.

Some of the bars are closed in the afternoon or on weekdays, but on Fridays and Saturday nights provide a unique opportunity to have a proper conversation and a decent beer while enjoying the local culture. And it’s generally fairly priced too.

Underneath the following bar descriptions you will find a map that helps you navigate safely through what remains part of the city’s most dangerous area.

El Guanabano is located in Parque Periodista, known locally as Smokey’s Park because of the regular consumption of marihuana by local youth.

The bar is easily recognizable because of a 15-foot tree growing out of the roof.

For 25 years, the bar has been a meeting place for local artists, underground music aficionados and general bohemians.

The music ranges from old-school punk to acoustic live music and anything you wouldn’t hear on the radio.

Diogenes in one of downtown Medellin’s three legendary old-school salsa bars, two of which described here.

The corner bar is one of the few bars downtown that has chairs on the street. Speakers attached on the bar’s exterior allow to you to listen to some of the bast classical salsa ever made while people-watching.

The interior of the bar is like coming out of a time machine; the round bar and red lights makes the establishment look like a 1970s strip club. The music, however, makes it very clear that this is a bar for hardcore salsa, boogaloo and latin jazz fans.

It is housed in a colonial building, originally with a large patio in the middle, and maintained beautifully.

While during the day it is a nice place for lunch or a quiet talk, weekends are opposite and the bar turns into one of the best places for dancing downtown.

The music varies from alternative rock hits and reggae on weekdays to hardcore dancehall and indie rock on weekends.

El Eslabon Prendido is one Medellin’s most iconic and renowned salsa bars.

It is also a complete madhouse over the weekend because of its immense popularity and relatively small space. This combined with the pounding old-school salsa and boogaloo records make the bar one of the most radiant places downtown, even when it’s closed.

Earlier in the evenings and on quiet nights, the bar is one of the best to listen to the best salsa you have never heard.

Casa de Asterion is one of the younger bars in the area, and quickly established as the go-to place for the local bohemian crowd.

The provided music is an eclectic mix of post-punk, salsa, a lot of Nick Cave, tango and plain weirdness.

The bar serves several types of (pretty okay) coffees, a relatively okay selection of liquors and almost all the local beers.

On Saturday afternoons the shop holds a garage sale.

The Colombo Americano is mainly known as one of the best language institutes in the city.

But — and few know this — if you enter and walk to the back of the building, an elevator takes you to the 10th floor where you can find one of the city’s most sophisticated bar/restaurants.

The bar offers a multitude of beers, wines and liquors. The bar’s terrace allows you to drink outside while overlooking the city of eternal spring.

The food is also outstanding.

Wall Street is by far the most popular and possibly coolest places to go downtown.

The establishment is divided in two; the front is a cosy alternative music bar where the DJs and bartenders put on mainly alternative rock classics. The building is old and the bar consists of two floors, allowing you to find some privacy while enjoying a chat.

If talking gets old and you feel like dancing, a small door in the back of the bar leads to you an unpretentious, but very fun club in the back.

El Acontista is a jazz bar / bookstore. The ground floor is a pretentious but beautiful café where middle-of-the-road jazz mixes with the soft talking of its visitors.

Unlike many other bars throughout the city, the bar offers a wide variety of beers, juices and wines. While relatively overpriced, the bar is perfect for bringing your parents.

Invisible from the outside, on the second floor there’s a beautiful bookstore.