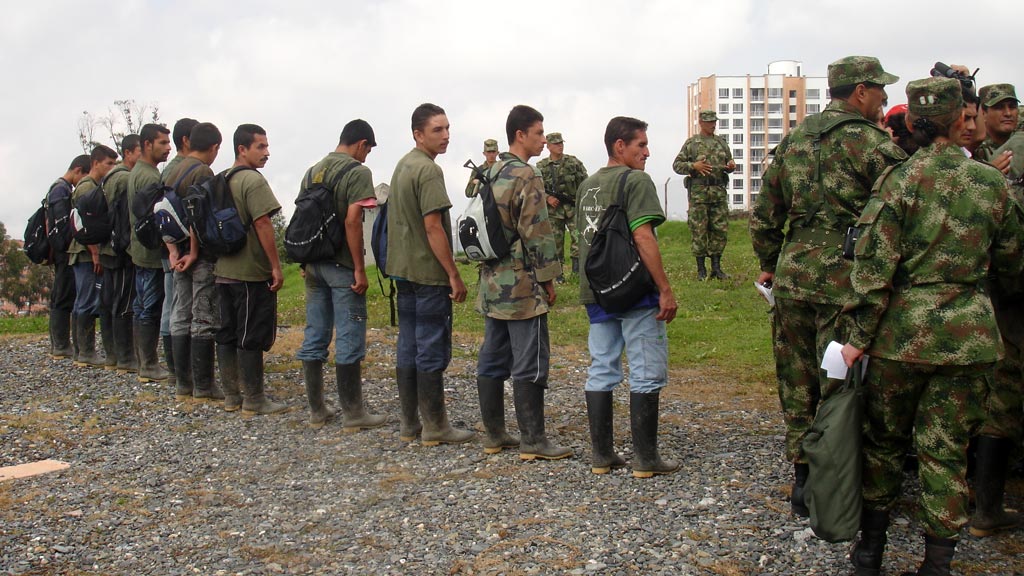 In the years after Colombia’s largest paramilitary organization AUC demobilized, thousands of its demobilized members were assassinated. FARC rebels, currently negotiating peace with the government, could await the same fate.

According to the administration of Juan Manuel Santos, it guarantees the security of demobilizing fighters.

“The National Protection Unit is fully prepared to take on this challenge if it is considered at the table and it is precisely one of the things that we have come to raise here, we have all the logistical and human ability to assume that responsibility,” said UNP director Diego Mora to BluRadio.

However, the Colombian government has an infamous track record of failing to provide security, breaking promises made during negotiations, and state officials have even been actively involved in the killing of demobilized guerrilla or paramilitary fighters.

The FARC has expressed major concerns that if they down their weapons, they could be slaughtered by right-wing neo-paramilitaries and their allies within the state apparatus. And for good reason.

After the guerrillas took part in the formation of the Patriotic Union party as part of peace talks with former President Belisario Betancur in 1985, more than 3,000 UP members, including two presidential candidates, were assassinated by paramilitary groups and state officials aligned with the extreme-right paramilitary groups that formed around the time of the UP’s foundation.

Additionally, following the demobilization of the paramilitary AUC by former President Alvaro Uribe, thousands of demobilized paramilitaries were assassinated, presumably by non-demobilizing AUC members or corrupt state officials afraid their ties to the designated terrorist organization would be exposed.

According to the ACR, 2,700 demobilized members of the AUC were assassinated. The Organization of American States (OAS) puts this figure as high as 3,700.

Learning from past mistakes

As the government begin to put plans in place to demobilize the FARC, a failure to learn from the extermination of both UP and AUC members could result in a similar extermination.

This threat comes from the same neo-paramilitary groups formed by members of the AUC who did not demobilize, corrupt state officials and drug traffickers seeking to protect rackets currently ran together with FARC units.

According to conflict analyst Ariel Avila there is a danger of “significant bloodshed” if the FARC were to demobilize and the government fail to tackle the neo-paramilitary threat.

International cooperation and supervision have been key features of the negotiations in regards to the FARC’s disarmament to date.

International funds will be available for the protection of individual FARC members and even US Secretary of State John Kerry vowed protection for demobilizing FARC fighters when visiting the peace talks in March.

However, the ACR director told media that his office does not even have a defined budget for the protection of demobilizing FARC fighters as nobody really knows how many people are in the FARC, except maybe the guerrillas themselves.

So far, authorities estimate to be demobilizing between the 20,000 and 30,000 armed and unarmed members of the FARC.

Head government negotiator Humberto de la Calle noted that “there were some extraordinarily concrete elements, for example the announcement of support by the US for the security of people who lay down their arms, which we know is one of the critical topics in the negotiations.”

However, as the past have demonstrated, paramilitary groups and drug traffickers do not take orders from neither the Colombian nor the US government.

Most importantly, both the US and Colombian government have consistently denied the existence of paramilitary groups and, while trying to combat the “criminal bands” as they call them, have not been able to prevent a major expansion of these post-AUC paramilitary groups.

The paramilitaries have already begun appearing in FARC strongholds and have almost doubled territory under their control.

More worryingly, particularly for the FARC, is the fact that groups like the Urabeños increasingly have been targeting leftists and human rights workers, exactly like the AUC did before them.

A failure from the Colombian government and international supervisors to eliminate the neo-paramilitary threat would mean the FARC leadership would be signing a death warrant for many of their supporters rather than a peace agreement.