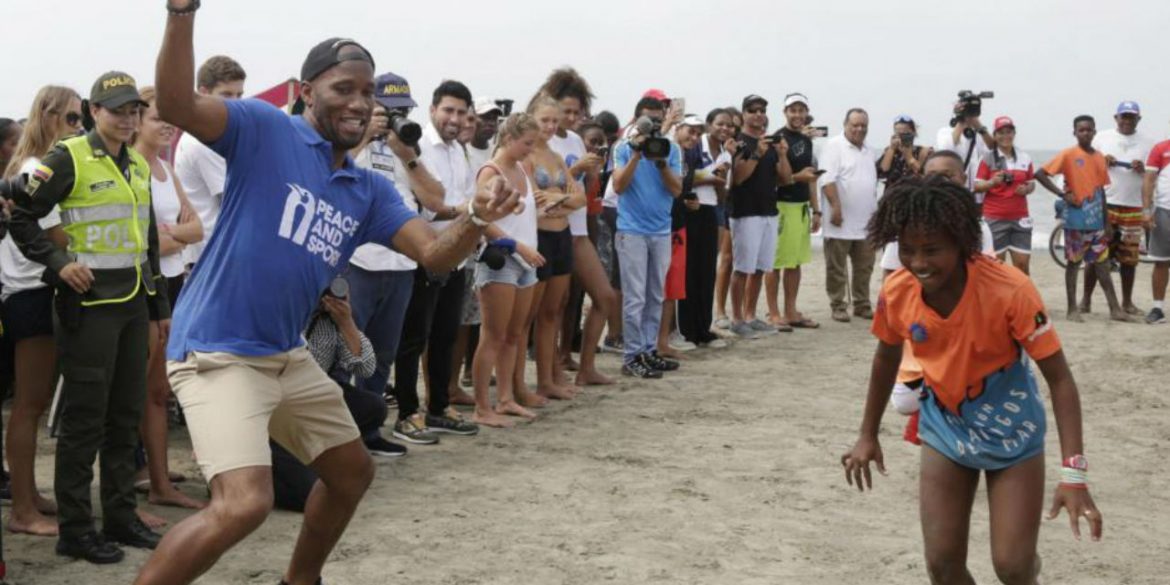 Former Ivory Coast international Didier Drogba on Monday called on Colombians to support initiatives that are part of the country’s ongoing peace process.

The former Chelsea star is one of the figureheads of the campaign “Champion for Peace” in Colombia and visited the northern city of Cartagena to give a workshop to some of the city’s poorest children.

Drogba urged the South American nation to “support this type of initiatives that are focused on promoting peace.”

“I am very proud of what they have achieved… Colombia is today a good example before the world,” the former Champions League winner said when asked about the peace process that started with a 2016 peace deal with FARC guerrillas.

Drogba said he believed that sport can play a crucial role for young people as the country strives to heal the scars after more than 50 years of armed conflict.

Drogba shared his experience of growing up in poverty and strife in West Africa as he aims to inspire a generation of young Colombians to overcome the horrors of the conflict that has seen thousands killed and millions displaced.

I come from a very poor place in Ivory Coast, I was born in a slum, as a child I always wanted to be a great soccer player, I fought a lot and I achieved my dream. I love children, they are the opportunity to change, to bring peace… they correct the mistakes of adults.

Drogba, who played for the Ivory Coast international team for 12 years between 2002 and 2014 described how soccer became a powerful force of reconciliation in his own country.

Once we faced a very important match by elimination and I got images of bands from the north and south of Ivory Coast, before irreconcilable, but this time united around a television following a game of their national soccer team. When people gather around a sporting passion, they forget about differences and conflicts and give themselves to dialogue, those spaces must be taken advantage of by organizations for peace and by governments.

In December of last year, Drogba accompanied a Colombian delegation to Monaco to receive the Sport and Peace award in the Diplomatic Action of the Year category awarded annually by the international organization Peace and Sport and on that day vowed to visit the country.

This initiative, “Sports and Cultural Diplomacy”, has allowed more than 1,539 children and 287 trainers and music teachers have made 120 exchanges in 45 countries.

Colombia is now at the crucial stage of implementing a peace deal agreed between the government and the now-demobilized Marxist inspired FARC.

The conflict, which involved the guerrillas, the Colombian state and several paramilitary groups cost the lives of more than 260,000 people and left more than 7 million displaced.