The US Justice Department requested the extradition of FARC ideologue “Jesus Santrich” on a vague claim he conspired to make one of the biggest cocaine deals in the history of drug trafficking.

The extradition request plunged the country’s peace process in crisis. The demobilized guerrillas have consistently claimed that the DEA and chief prosecutor Nestor Humberto Martinez’ had “framed” Santrich. 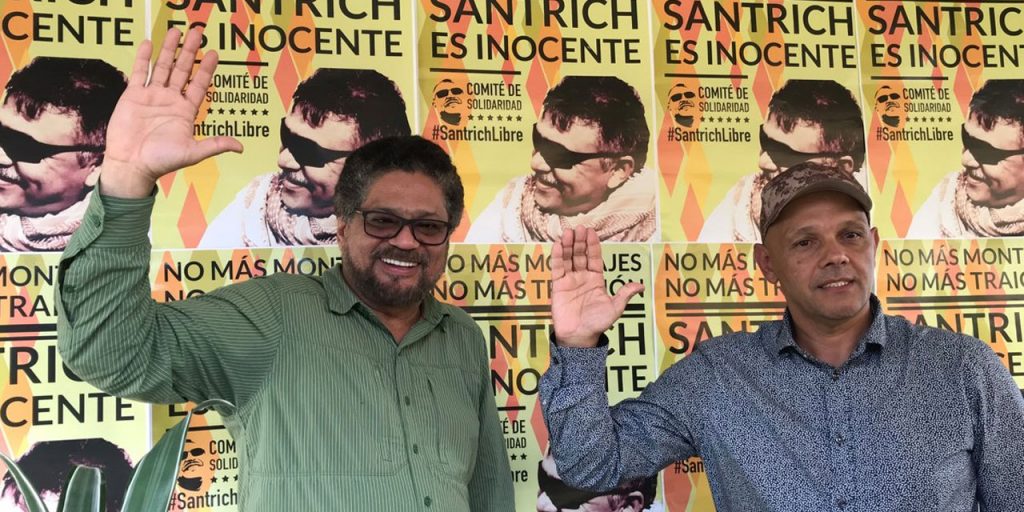 “Ivan Marquez” and “El Paisa” are among more than 30 FARC leaders who went into hiding after the arrest of Santrich.

In the wiretap, the virtually blind FARC leader agreed to meet with businessmen to discuss reintegration projects for demobilized FARC guerrillas, and not a drug trafficking deal with an undercover DEA agent as claimed by the foreign counter-narcotics agency.

The phone call was reportedly made on February 1, a week before DEA agent Brian Witek met with Santrich and Marin. According to the DEA, Witek pretended to be a Mexican drug trafficker seeking to export 10 tons of cocaine to the United States.

Wiretaps and a photograph made by Witek were released to the media after Santrich’ arrest in April, but did not support the US charges that Santrich was conspiring to traffic drugs.

The newly revealed recording makes it appear that the DEA agent and his informant did “frame” Santrich as claimed by the FARC.

Local media reported that Marin voluntarily flew to the United States after Santrich’ arrest and has since vanished.

Marin: Hello, comrade. How are you?

Marin: Glad to hear, comrade. Our friends who got you that bottle as a present the other time are here in Bogota, right? So, they tell me that they only ask for five minutes with you so you can tell them that we will begin with the projects… So they tell me “We only need him for five minutes. We won’t talk about anything else, just that he confirms that everything is ready to begin working on the productive projects we were considering, so we can begin working.” It’s all they need.

Trouble looms for DEA and Martinez

The newly released audio all but undermines the claim that plunged the peace process into crisis just as both Martinez and the DEA were already under unprecedented fire.

The country’s war crimes tribunal accused Martinez earlier this month of trying to “categorically meddle with” and even “intimidate” the transitional justice system that is investigating crimes against humanity left neglected by the prosecution.

The DEA was embarrassed earlier this month when Associated Press reported that the agency’s regional director had been using American tax payers’ money to visit prostitutes in Colombia’s capital Bogota.

The apparent hoax is likely to increase tensions between the United Nations and the US. The UN monitors the peace process that the DEA covertly could be undermining.

The US government and the DEA refuse to cooperate with the peace process’ voluntary coca crop substitution program that is promoted and monitored by the UN.

The international organization has long criticized the militaristic counter-narcotics policy promoted by hard-liners in Washington DC and Bogota.

Martinez’ position would have become untenable months ago already had he not had a pile of criminal cases against members of Congress, the only body that can investigate the Prosecutor General.

Colombia’s peace process in the meantime seems to have come to a virtual halt, with the exception of the war crimes tribunal and the truth commission that operate independent from the government.

Promises made to victims have not been fulfilled and former FARC guerrillas have massively abandoned the camps where they were supposed to be reintegrated into society.

President Ivan Duque has fiercely opposed the peace process, and in particular the transitional justice system that could spur criminal charges against many of his political allies and economic backers.

Crimes against humanity carried out during the conflict by the guerrillas, the state and the private sector has left millions of victims.

The possibly tens of thousands of victimizers of these crimes have long enjoyed a virtually absolute impunity rate.