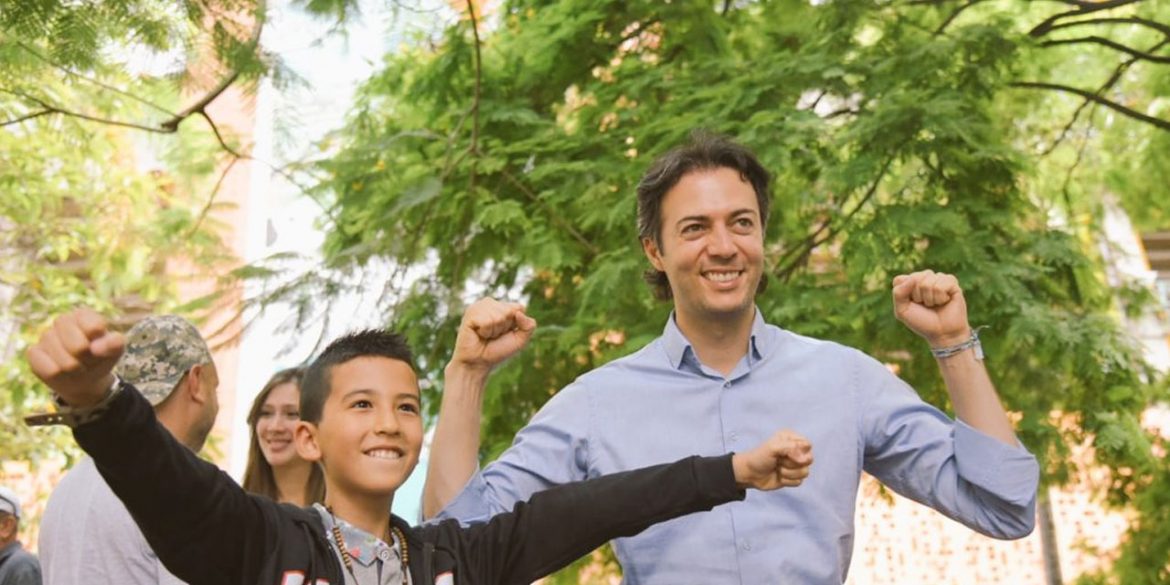 Daniel Quintero is the mayor of Colombia’s second largest city Medellin after a surprising victory in the 2019 elections.

Quintero was born in Medellin in 1980 into a lower middle-class family and grew up in the Tricentenario neighborhood in the north of the city.

The mayor-elect is the son of a car mechanic who lost his mother at the age of 14 and got into politics following a short but successful career in business.

After initially helping his father to sustain his family, Quintero entered the local University of Antioquia to study Electronic Engineering at 17.

He was able to sustain his studies and himself due to scholarships and benefits from the university. Following his graduation, he went to Bogota to study finance at the private Los Andes university.

In 2005 and while still in university, Quintero founded Intrasoft, a company that specialized in providing commercial technological services.

Two years later, Quintero first had a go in politics, running for Medellin’s city council for the Conservative Party in line with his father’s political ideology.

The 27-year-old upstart was not supported by any of the local electoral barons and gained minor local fame for campaigning with a blue piggy bank to finance his campaign. He lost, but only just.

In 2009, Quintero left his company in the hands of his business partner and traveled to the United States for a course in Public Finance Administration at the Harvard Kennedy School of Government, followed by an MBA at Boston University.

In 2011, he supported his brother Miguel’s ambitions to become city councilor for the Green Alliance party. The two brothers successfully campaigned together as they did unsuccessfully in 2007.

Having become a member of the Green Alliance party, Quintero sold his share in his company in 2012 and created the Piensa Verde (Think Green) think tank. He gained some national prominence for promoting the planting of a million trees in Colombia as well as other Latin-American countries.

A year later, Quintero helped set up the anti-establishment Tomato Party that achieved fame and visibility in the media due to the fact that would throw tomatoes at pictures of politicians and other public figures considered corrupt or representative of the country’s traditional politics.

The movement’s anti-establishment provocations lasted until 2014 they were disallowed to take part in congressional elections.

In a controversial move, Quintero joined the Liberal Party to unsuccessfully run for Congress for one of Colombia’s traditional political powerhouses and campaigned for the reelection of Santos, who he previously opposed.

As a reward, Quintero was offered to manage Innpulsa, the government entity to stimulate the creation of start-ups. A year later, he became Santos’ Vice-Minister for ICT.

In 2016, Quintero returned to Antioquia for a month to manage the campaign that unsuccessfully sought the approval of a peace deal with the FARC.

In November 2017, the rising star in the Liberal Party became one the key advisers in the presidential campaign of Santos’ former chief negotiators in the peace talks, Humberto de la Calle.

After De La Calle was eliminated in the first round and the party decided to support the candidacy of President Ivan Duque of Uribe’s far-right Democratic Center party, Quintero publicly resigned and declared his support for opposition candidate Gustavo Petro.

After Duque’s election victory, Quintero returned to Medellin to begin preparing his campaign to run for mayor. His brother, who had acquired a job at the governor’s office, resigned and the two teamed up to go on campaign again.

Initially, the two promoted the anti-corruption referendum of former Senator Claudia Lopez, and slyly printed Quintero’s name and face on the back of the flyers.

His next stunts targeted mismanagement of Medellin’s public utilities company EPM, which was in crisis over the disastrous construction of the Ituango dam in the north of Antioquia.

Quintero outed his fierce criticism in symbolic and social media-friendly acts like giving a big lump of cheese to controversial EPM director Jorge Londoño, implying he was a rat.

At the end of 2018, the brothers began to collect signatures that would allow Quintero to run as an independent candidate. The candidate publicly rejected the endorsement proposal of Lopez’ Green Alliance.

A month before the elections, he blocked both Gustavo Petro and Alvaro Uribe on Twitter in one of his final attempts to disassociate himself with any established politician.

As the elections came closer, the candidate came closer and closer to his main rival, the notoriously dull dynasty politician Alfredo Ramos who was endorsed by Uribe and his far-right party.

Defying all polls and predictions, Quintero defeated Ramos and caused a political landslide in the heart of “Uribista” territory.

The Uribistas and supporters of former Mayor Sergio Fajardo tried to impeach Quintero in a 2019 referendum that led to a fraud investigation against the organizers in early 2022.

Inspector General Margarita Cabello provisionally suspended the mayor ahead of the May 29 presidential elections for Quintero’s alleged abuse of power to support the candidacy of Senator Gustavo Petro.