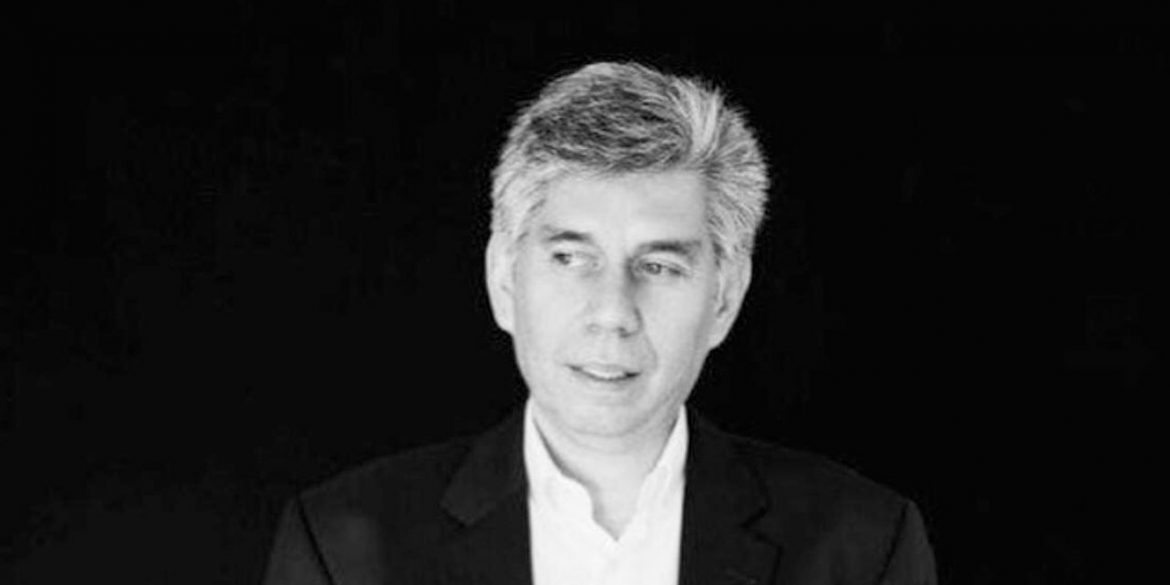 I should have never gone back to Semana after my first layoff. My wife Maria Cristina, the person I love the most in life, told me so at that moment. I felt it from the beginning. Three minutes after I said yes, I was already sorry.

It happened at the Cipriani restaurant in Miami at a lunch kindly organized by Gabriel Gilinski to try to overcome the differences. The truth is that those differences were insurmountable.

On my side because I believed and I continue to believe that Semana failed its journalistic duty by omitting the publication of the investigation about the return of false positives, a job that ended up being done by The New York Times, as I wrote in the column “The Pending Explanation” in May last year. On the magazine’s side, because after my public questioning of their editorial decision, they no longer wanted me. They just wanted to stifle the controversy of my departure, save a few subscriptions and slowly wither the column from the inside.

At the table were the president of Publicaciones Semana, Maria Lopez, the director of the magazine, Alejandro Santos, shareholder Gabriel Gilinski and myself. For a long time we discussed the terms of the agreement that would be reflected in a brief statement.

In the end we agreed that I would have total independence to write my column -including the possibility of disagreeing with the magazine — and that the shareholders would respect the editorial autonomy of the director Alejandro Santos.

When we agreed on the text I asked for a moment to tell my wife.

I came back to the table and surprised them mid conversation saying to one another that for Sandra — referring to Semana’s manager and Uribe’s former minister Sandra Suárez — my return was bad news. They were arguing about who would dare to tell her. In true Bogota fashion they changed the subject when they noticed me. At that moment I thought it would be better to reconsider and not return, I was just ashamed to say it, especially because of Maria.

It had been less than three weeks from my dismissal, but when I returned everything had changed forever. Things that had never happened before began to happen. Twice I noticed that my column was leaked on Friday afternoon to people close to former president Alvaro Uribe.

Another time, during the national strike, I asked to be allowed to update my column to bring it up to date with the latest events, but this was refused. Curiously, two other columnists were allowed to do so.

Another thing that happened was that they began changing the name of the column’s URL, which causes difficulties for users to find it through internet search engines, which are the majority. In other words, traffic decreased. While for the other columnists the title of their article was maintained, mine was changed as if they wanted to prevent it from being read.

When I asked for explanations they didn’t say anything for many days. Finally, the response of the “Chief Digital Officer,” who handles content but does not report to the editorial board but to manager Sandra Suarez, was “forget it.” When I insisted, he told me that it would not happen again but he did not bother to explain why it happened.

I had gotten used to everything. Sometimes you have to pedal uphill in this job. I even accepted, without complaining, when a few weeks ago the already modest fees Semana paid me for writing the column were reduced by 80 percent. My income went from symbolic to miserable. I didn’t complain, it wasn’t something I did for money, I always spent more on the column than I earned.

With monastic patience, I also endured the sporadic calls from Gabriel Gilinski where he managed to remind me that he is a “Uribista” and a Trump supporter, as if I should care. He, whom I told from the day I met him that business interests should be totally separated from the editorial line, liked repeating to me that his project was to build a “Colombian Fox News.”

For those who don’t know, Fox News is a successful propaganda machine of the American right that knows no boundaries when it comes to defending their preferences and interests.

What I was not willing to quietly accept was that the magazine I was writing for would violate journalistic ethics. And that happened on the morning of March 18.

Annoyed because Julio Sanchez Cristo of W Radio had reported on layoffs and some salary reductions at Semana that day, they decided to use the digital pages of the magazine to get even. That same morning, they published two mediocre articles about the behavior of the stocks of Grupo Prisa, the owner of Caracol, in the stock markets that had universally collapsed due to the coronavirus crisis.

The two vindictive publications were illustrated with the photo of Sanchez who has nothing to do with the price of the shares but was the target of the attack.

So, knowing what would happen, I wrote and filed the column “The Ears of the Wolf” on Friday March 20 at 7:55AM.

At 2:53PM I received a WhatsApp message from shareholder Gabriel Gilinski telling me: “Daniel, we are really surprised by the interpretation you gave to a business story that had appeared in the international press. Considering that Prisa owns Caracol, Colombia’s most important radio company, the information is journalistically relevant. This was determined by the editorial team that publishes hundreds of daily news items of public interest. All the information published reflects the information of important media in Spain.” 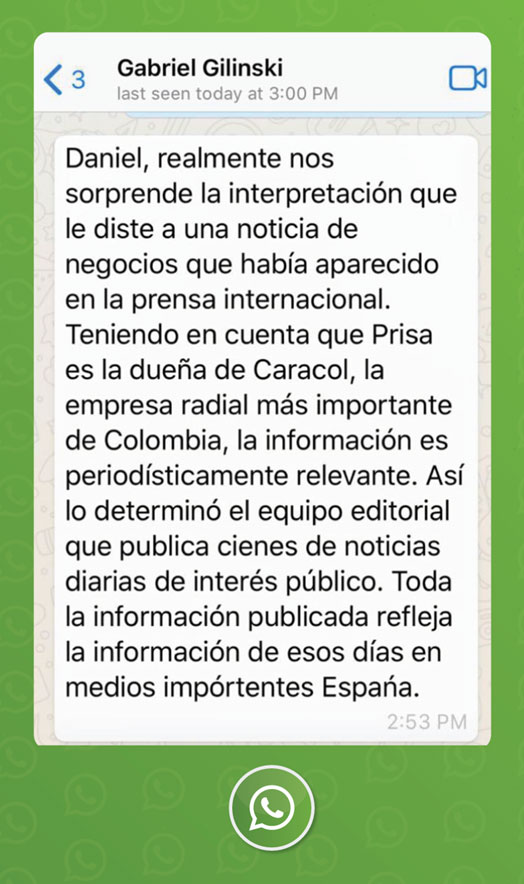 The message was strange by all accounts because Gilinski, who in theory has no journalistic authority in Semana, was making clear editorial comments to me about a column that had not yet been published, speaking to me in the majestic plural: “we are surprised” and evaluating the retaliation as “journalistically relevant.”

Among the “important media in Spain” on which the revenge was based was the website Hispanidad, whose director Eulogio Lopez was sentenced to six months in prison for making homophobic comments.

Three minutes later another Whatsapp from Gabriel came in: “The reservations you expressed are personal and from reading the texts nothing of what you say makes sense. Therefore, the column will not be published.” 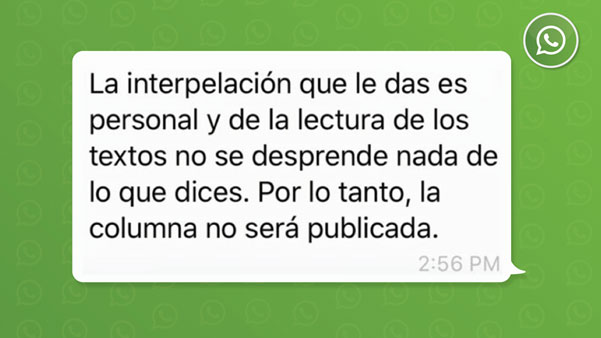 Something must have happened in the hours that followed because at 5:34 in the afternoon and again through Whatsapp, the unquestionable resolution began to change: “Well, in the end it’s not my decision. They will take the decision at Semana.” 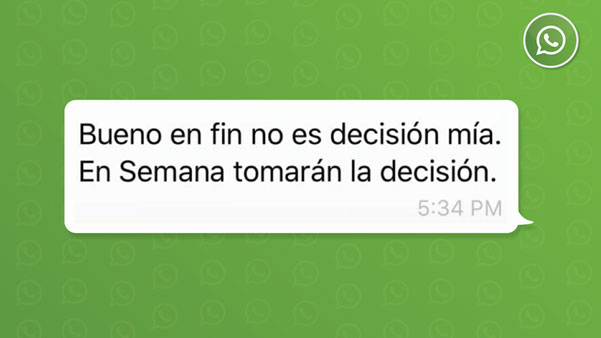 By 6:00 PM the announced censorship had become just an opinion: “Those who handle the editorial issues at the magazine decided to publish your column. The opinions I gave you are personal. Semana will respect your opinion, even though I personally don’t agree with the content for the reasons stated. 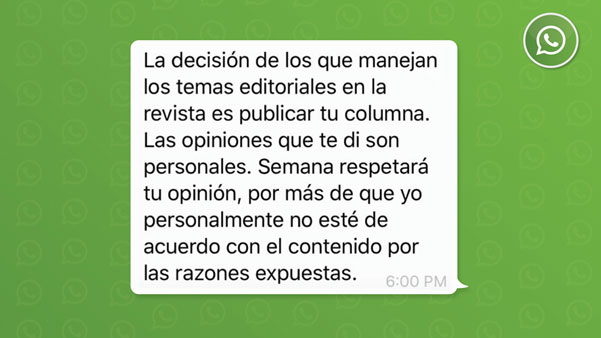 Gabriel called me several times for two days but I didn’t answer him because it wasn’t him, but director Alejandro Santos, who is the right person to talk about editorial issues. Alejandro never called.

The column was published and a few days later I received another Whatsapp and an email, this time from manager Sandra Suarez, informing me of my dismissal due to “company policy.” 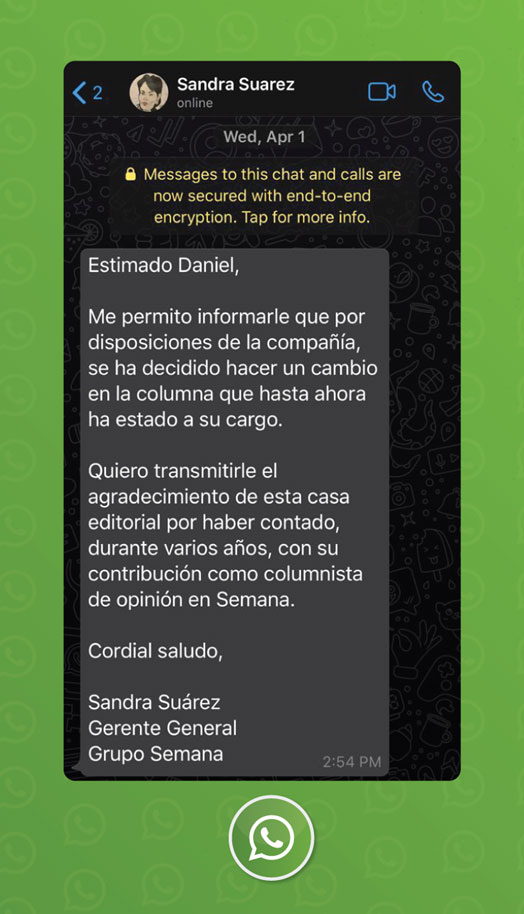 I thought it was time to end my career as a columnist, however I still have some stories to tell you.

Additionally, being at the side of Daniel Samper Ospina — whose resignation in solidarity I will always be grateful for — encourages me to explore this new path to continue talking to you.

Author Daniel Coronell is one of Colombia’s most senior journalists and president of news at US television network Univision, who started “Los Danieles” after criticizing Semana magazine cost him his column.