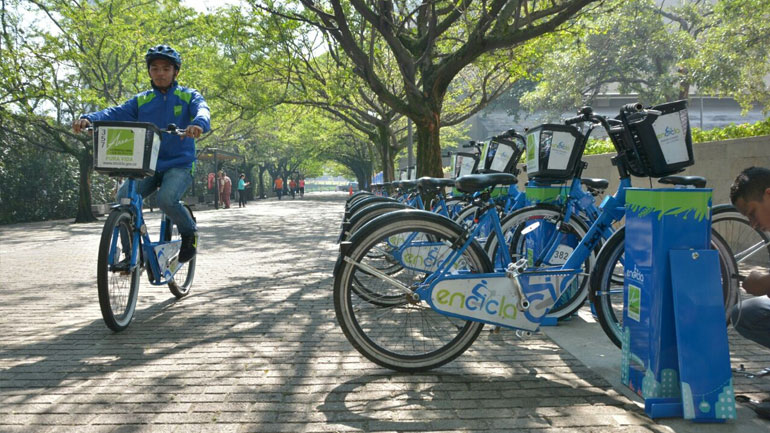 Cycling in Medellin: A new phenomenon

A public bicycle sharing system has found great success in Medellin, Colombia’s second largest city. However, a lack of space to cycle safely is keeping the city from becoming a true bicycle-friendly city.

Medellin currently boasts 600 free bikes and 35 stations around the city, 17 of which are automatically controlled.

To take advantage of the bike share, both Colombians and foreign visitors to the city can sign up online using their identification to borrow bikes for up to an hour before returning them to a station.

There is no cost to use the program for either residents or visitors.

“The bicycle is a new means of transport in the city, and making it free is the best way to incentivize the use of the system, Lina Loaiza of EnCicla, the entity in charge of the free bicycles, told Colombia Reports.

Since the program’s inception in 2011, more than 20,000 people have signed up and over 1,000,000 trips have been taken. The unmistakable blue bicycles with their characteristic metal baskets are a ubiquitous sight in the city’s cultural and economic centers.

In 2011, three engineering students from a local university teamed up with the government to create a pilot program, lasting for six months, that would gauge whether the people of Medellin were receptive to a bicycle sharing program.

The pilot program was wildly successful and has since expanded to its current 600 bikes and 35 stations.

EnCicla hopes to complete their most drastic expansion yet, adding 800 more bikes and 15 more stations, all of which will be automatic, bringing the total to 1400 bicycles and 50 stations by the end of this year.

With more bikes, however, the demand for bike routes will undoubtedly increase which is Medellin’s main bottleneck to promote cycling as a form of commuting.

Currently, Medellin has 31 kilometers of bike routes with 5.2 more kilometers under construction.

Thus far, the municipal government agencies have failed to demonstrate the political will necessary to spur the creation of bike paths, and as a result the percentage of trips taken by bike in Medellin and the Aburra Valley stands at a paltry 1% as of 2012.

Currently, there are no plans on the part of the regional government to create more bike routes, a frustrating development for EnCicla and cyclists in Medellin.

However, the city has submitted a master plan with regard to bike policy in Medellin, which includes the widespread construction of more bike routes. Only then, in the opinion of the administration, will participation in the bicycle sharing system be able to change the face of transportation in the valley.

However, whether there will be budget for this depends on the city council.