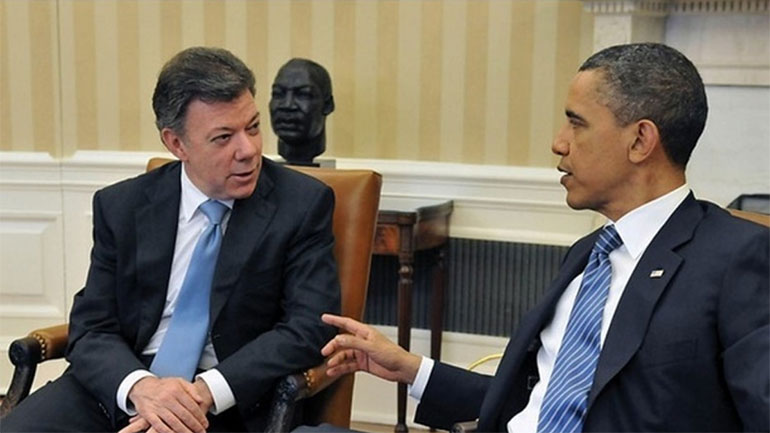 Correcting Plan Colombia: 5 ways the US can support lasting peace in Colombia

Colombian President Juan Manuel Santos will meet with US President Barack Obama to promote the peace process and mark the 15th anniversary of Plan Colombia, a US assistance package that was accompanied by grave human rights abuses on the ground since it started in 2000. Their meeting provides an excellent opportunity for the US government to learn from the mistakes of Plan Colombia, and ensure that future aid and diplomacy truly contributes to a lasting peace.

This should start with an honest assessment of Plan Colombia. Rather than holding the aid package up as a complete success story, Presidents Santos and Obama need to recognize the many failures of Plan Colombia, which are illustrated well by WOLA’s new interactive presentation on its legacy and the Latin America Working Group Education Fund (LAWGEF) infographic on the human rights impact of the aid.

Fortunately, the coming years will give the United States a chance to improve on these failures. Now that the country is nearing an end to its armed conflict, there are concrete steps the US government can take to resolve the challenges facing Colombia. As WOLA and LAWGEF have pointed out, this strategy will require US policymakers to commit to several points, including:

1 – Supporting the full implementation of the peace accords

Like the peace agreements that ended Central America’s wars in the 1980s and 1990s, any agreement between the Colombian government and the Revolutionary Armed Forces of Colombia (FARC) will depend on the United States and the rest of the international community ensuring that Colombia has the resources and will to implement accords to the letter. The United States and other international donors can also make sure that independent, civil society-led efforts to monitor the accords’ implementation are supported as well, and that the disarmament and demobilization of all armed groups is carried out with a strict view to making a lasting impact.  For peace to take root, it is also crucial that peace talks start as soon as possible with the last remaining guerrilla group, the ELN.

After a peace accord is signed, rural areas that have been traditionally controlled by the FARC and other armed groups will start to open up. This will provide Colombian authorities with an opportunity to improve access to government services, or to build civilian institutions where none previously existed. A rural development strategy—one that factors in the reinsertion needs of thousands of demobilized actors—will be vital to the success of Colombia’s peace accords. Support for civil society organizations that build peace on the ground must be increased.  The US Agency for International Development (USAID) could play a key role in supporting these efforts.

3 – Encouraging efforts to improve the recognition of human rights and labor rights, particularly those of Afro-Colombian and indigenous communities

These communities’ collective territories are among the most impacted by the fighting in Colombia, and indigenous and Afro-Colombians make up a disproportionate number of conflict victims. The fact that the current peace process in Havana has not included formal participation of a subgroup on ethnic minorities is greatly concerning since their voices and collective rights could be left out of peacebuilding efforts altogether. USAID’s Afro-Colombian and indigenous ACIP program has made important contributions on this front. Post-conflict efforts should fully integrate the Afro-Colombian Peace Council (CONPA), the National Organization for Indigenous Peoples (ONIC) and ethnic victims’ leaders from CONPAZ to be effective.

4 – Backing a transition towards a more traditional role for the Colombian armed forces, and bring internal law enforcement under civilian control

The end of the armed conflict will allow the armed forces to return to their traditional—and more appropriate—focus on external defense. As the Colombian government expands its presence in neglected conflict areas, police under civilian control will have to replace military troops in these communities. This will require a well-monitored civilian law enforcement force with extensive training in community policing and human rights.

5 – Supporting efforts to secure truth, justice, and guarantees of non-recurrence for the victims of the conflict

The United States should provide assistance to Colombian victims, civil society and government efforts for truth and justice. In addition, by taking the lead and declassifying US documents, the United States can help Colombian counterparts follow suit in making all relevant military and intelligence files available for the truth commission and transitional justice purposes. This is no small act: ultimately, the United States would be helping an entire country turn the page on 50 years of atrocities and brutal war.

Lisa Haugaard is the executive director of the Latin America Working Group, and has spearheaded advocacy on human rights and peace issues in Latin America for two decades. She directs advocacy on Colombia, Central America, development and military aid and policy and coordinates coalition campaigns with U.S. and Latin American partners.