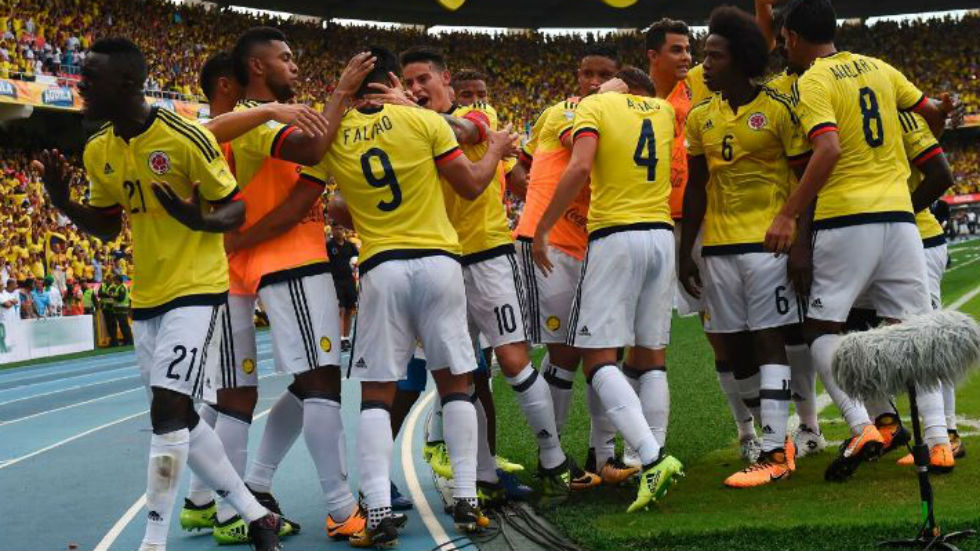 Colombia’s national soccer team kept its hopes of qualifying for the World Cup in Russia next year alive with a hard fought 1-1 draw with Brazil in Barranquilla on Tuesday.

A second half header from record goalscorer Radamel Falcao cancelled out a first half Willian strike to secure a point for the home side allowing them to provisionally hold on to second place in the CONMEBOL South American section of qualifying.

“Los Cafeteros” moved onto 26 points in the group, only three more than Argentina in fifth but the draw is all the more valuable as rivals Chile lost 1-0 in Bolivia as two games remain in the campaign.

The game started brightly with both sides attacking from the off but Brazil appeared more assured in possession early on.

The visitors nearly opened the scoring in the 17th minute when a corner landed at the feet of Fernandinho,  but the Manchester City midfielder’s shot was blocked before Paulinho committed a foul in the follow up.

Colombia’s captain James Rodriguez made a powerful break in the 25th minute and after combining well with Edwin Cardona, the attacker saw his shot saved by Brazil goalkeeper Alisson.

Three minutes later Neymar linked up well with Firmino but Colombia’s David Ospina managed to turn his shot around the post for a corner.

While Brazil continued to press, Colombia looked dangerous on the counter attack drawing fouls from the retreating Brazilians. James lined up a free in the 42nd minute and hit the target, only to be denied by Alisson in the Brazil goal.

The crucial moment of the half however, came just before the break when a long ball from Dani Alaves was tapped down by Neymar to the advancing Willian who unleashed a shot that crashed into the top corner of the sprawling David Ospina’s net to stun the home crowd.

Pekerman looked to the bench at the restart,  introducing  Junior Barranquilla’s Yimmi Chara  for Juan Cuadrado.

Chara was immediately involved as a much improved Colombia side began to apply pressure on the Brazilian defense.

A good move down the right-hand side involving James Rodriguez and Santiago Arias resulted in the full back crossing for Radamel Falcao who powered a trademark header past the hapless Alisson to level the match in the 55th minute.

The goal gave a rejuvenated Colombia some momentum and Bayern Munich star James Rodriguez was unlucky to see his audacious free kick ricochet off the post in the 59th  minute.

Brazil, and Neymar in particular responded to the Colombian onslaught with a series of attacks but failed to carve out any further clear-cut chances.

Pekerman gambled further by introducing Teofilo Gutierrez in attack while Tite brought in Gabriel Jesus in the closing stages but neither side managed to do enough to secure all three points.

The result puts Colombia in a strong position going into the last two games against Paraguay and Peru and Pekerman will be satisfied with the resolve shown by his side upon falling behind against the Brazilians.

The top four teams in the group will qualify automatically for the World Cup in Russia with the fifth facing a play-off to secure a place at football’s most prestigious competition.