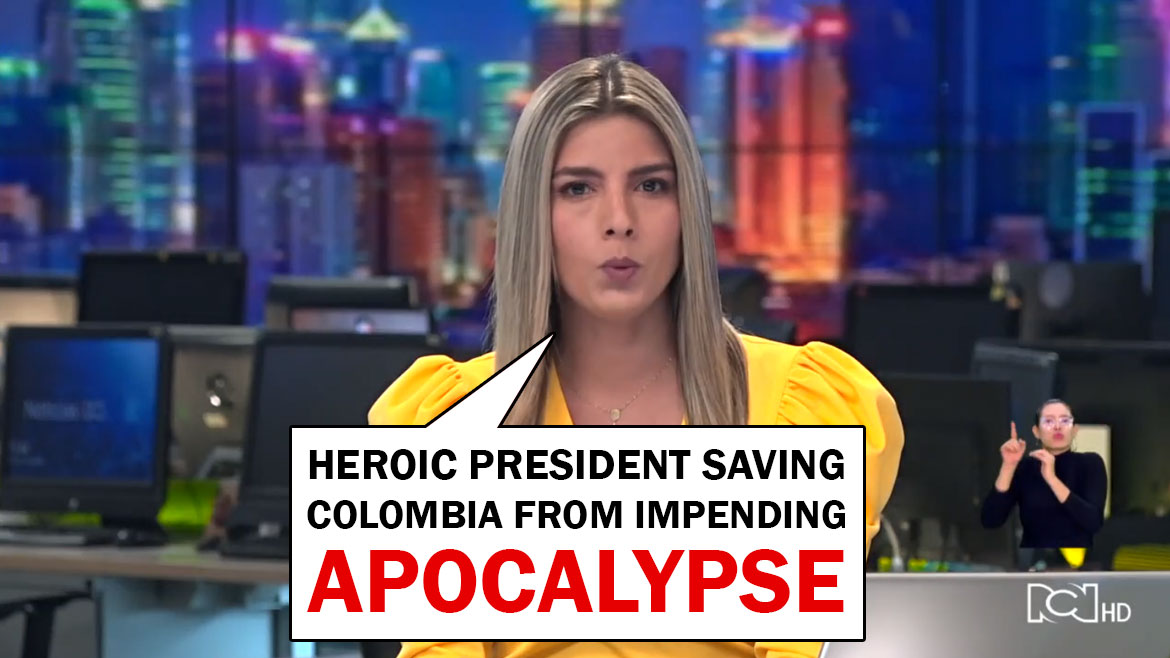 Television network RCN needed less than three minutes to imply that armed conflict victims may be part of a communist plot to destroy the paradise Colombia was while at war.

Friday evening’s news broadcast failed to inform the public on what was happening in Colombia, but gave a unique insight into RCN’s increasingly hilarious conspiracy theories, live bloopers and utter nonsense.

After a collage of random acts of vandalism, viewers were told about the “serious consequences” and housewives’ fear of “more than 20 days of road blocks and vandalism” that threaten more than 100,000 jobs.

The alleged vandalism and the 37 roadblocks reported by the defense minister are relatively uncommon incidents, but allowed the television network not to report on protests against President Ivan Duque and RCN itself.

Defense Minister Diego Molano claimed earlier that 2,151 roadblocks had been removed, which the television claimed was four times 37.

According to the television network, farmers lost almost $350 million (COP1.3 trillion) because of the roadblocks, based on an unsubstantiated claim by the Colombian Agricultural Society, the country’s longest-living fascist association of landowners.

To aggravate the crisis, the port of the Pacific coastal city Buenaventura lost $35 million (COP130 billion), said RCN, ignoring reports that five people were murdered in the port city.

In “some” of Colombia’s food distribution centers, wholesale food prices had gone up 400%, lawmakers and international observers learned was due to corporations using the crisis to make quick buck.

In Buenaventura, this price increase was due to extortion by illegal armed groups as Colombia Reports reported in January.

To counter the bulk of evidence of the riot police unit’s widespread human rights violations, the ESMAD and the television decided to broadcast the attacks on civilians as filmed by the police.

Several “agitators” were arrested on undisclosed criminal charges, according to RCN, implying they could add to the more than 1,260 alleged arbitrary detentions of innocent civilians reported by human rights NGO Temblores just hours earlier.

The television network additionally reported on negotiations between Duque’s far-right government and the organizers of National Strikes that is all but tumbling the government.

These negotiations have yet to results in the government agreeing not to violate human rights as Peace Commissioner Miguel Ceballos demands strike organizers to take responsibilities for roadblocks they have nothing to do with.

To further illustrate how the apocalypse is rapidly approaching, RCN provided news consumers replicated a far-right conspiracy theory claiming that congressional seats granted to armed conflict victims “could end up in the hands of the FARC,” the guerrilla group that demobilized in 2017.

A technical glitch cut short the television network’s report about Duque’s latest defeat in court that ordered the president to reveal how much he spent on COVID-19 vaccines.

The report that fortunately did make it to the end was the arrest of a former governor in Spain on charges he was involved in human trafficking and the sexual abuse of children.

Colombia’s recently appointed Foreign Minister Marta Lucia Ramirez traveled to New York to improve strained ties with US President Joe Biden, according to RCN, but was apparently ignored by the US government.

This segment was also cut short just Ramirez was saying something about “human ri….”

Last but not least, fighting between Israel and Palestinian group Hamas indicated that extreme violence is also happening in other parts of the world, and not just on Colombia’s most delusional corporate television network.