Colombia’s teachers strike and take to the streets again

Colombia’s teachers laid down work and are taking to the streets again on Thursday to protest against violence, substandard healthcare and the chronic underfunding of public education.

The teachers’ strike have become a recurring event in Colombia; the country’s education system has chronically suffered from underfunding and the mass killing and threatening of social leaders is also affecting teachers, who too often have become a target for illegal armed groups, especially those recruiting minors.

We demand that the government take the necessary measures to protect our social and trade union leaders, but at the same time that there be serious and concrete investigations, with results, because today impunity for crimes is more than 95%.

Apart from the ongoing violence and stigmatization, the teachers are reject a recent campaign by former President Alvaro Uribe, the political patron of President Ivan Duque, accusing the country’s school teachers of “indoctrinating” children.

“The teachers educate boys and girls, we teach them values so they can decide make their own decisions. We do not indoctrinate them,” stressed Alarcon.

What we say as Fecode, is that we do not agree that Colombia intervenes through war, invasion and arms. We believe that differences and conflicts are resolved through dialogue, not arms. We also call on the government to continue with the implementation of the peace accords.

As if the ongoing killings, threats and stigmatization by the ruling party wasn’t enough, the administration of Ivan Duque has allegedly cut enrollment goals in his National Development Plan in half and has given himself special powers over education.

“We don’t know what the President is going to do with those powers. Privatize public education? Hand it over to private operators?” Alarcon rhetorically asked.

The most recent concerns add to grievances over chronic neglect that have been prevalent in the education sector for years.

The teachers were able to negotiate a wage hike in 2017, but promises made to improve access to healthcare, meals for school children and basic educational infrastructure remain unfulfilled.

The teachers’ healthcare intermediate owes them $225 million, according to Fecode, that fears the chronic underfunding and the government’s chronic failures to keep its investment promises are slowly doing away with public education. 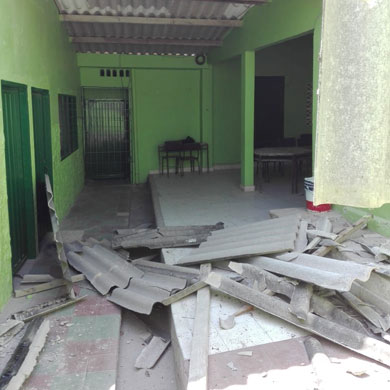 Some 15 minutes after the children left, the roof of the El Mamón school in Corozal, Sucre came down. (Image: Fecode)

Of the 520 contracts granted to renovate schools by the administration of former President Juan Manuel Santos, 430 were never executed, according to ENS. It is unclear whether the $630 million budget that was allocated to maintenance is being held back or has been embezzled.

As a consequence of the chronic neglect, some school buildings deteriorated to the point they had to be demolished. In other cases, children receive classes in “undignified” circumstances, according to ENS.

The teachers, again, have had enough and will take to the streets for the third time in a year.