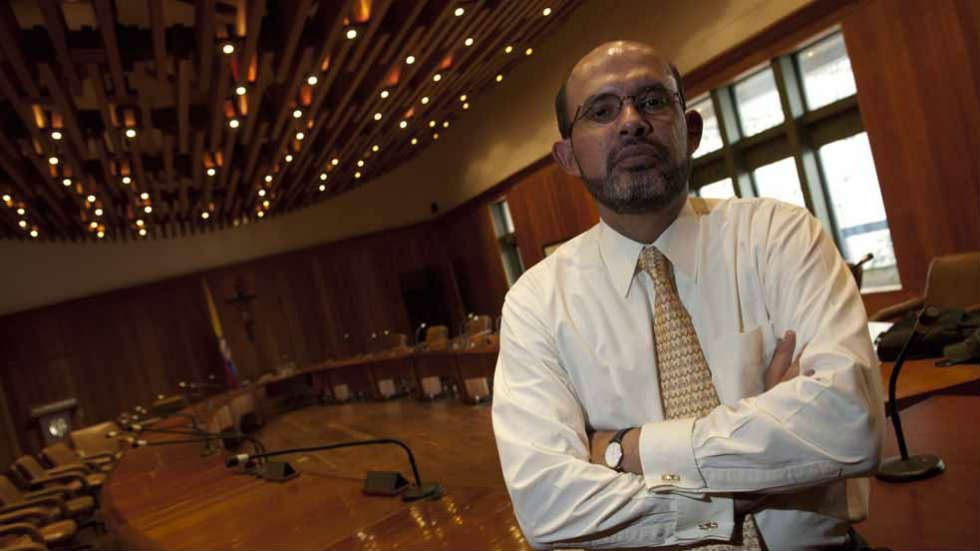 The former chief justice of Colombia’s Supreme Court prostituted justice and should be in jail for posing a threat to society, the prosecution argued after the shock arrest of the judicial heavyweight.

Media had been speculating for days that the arrest of Ricaurte and Justice Gustavo Malo could be impending.

The two judicial heavyweights were among the first to be implicated in an epic corruption scandal in which congressmen, drug traffickers and paramilitary chiefs allegedly bought their innocence.

The scandal, which is still unfolding, has plunged Colombia’s state system in the biggest crisis in recent memory. The very institutions embroiled in the bribery scandal are now in charge of investigating themselves.

Ricaurte and his alleged co-conspirators “prostituted” justice, according to prosecutor Jaime Camacho who asked a parole judge to jail the former chief justice for corrupting the very top of Colombia’s justice sytem.

What happened is devastating for the rule of law. Francisco Ricaurte … can be expected to continue his criminal activity because of the links he still has. There is also the possibility of manipulation of proof or evidence.

According to jailed anti-corruption prosecutor Gustavo Moreno, Ricaurte received hundreds of thousands of dollars to deny an arrest warrant for Congressman Musa Besayle (U Party), a political ally of President Juan Manuel Santos.

However, this case is just the tip of the iceberg of the criminal activity of Ricaurte and his co-conspirators in the justice system, according to the prosecution.

The network of corruption used the information they had of the processes, manipulated witnesses, altered or disappeared evidences, and manipulated the media.

Ricaurte’s extensive network in all branches of government makes him an imminent threat to society, the prosecutor calling for a denial of parole told the judge.

Information on the collection of payments in the criminal organization is still missing. There is a danger to the community, the crimes are very serious. Never before have the high courts been in danger like this. The only measure that guarantees the safety of the community is the incarceration of the former magistrate, nothing else would guarantee this.

The former chief justice had applied for a position in the transitional justice tribunal that is part of a peace process with the FARC, but was left out as corruption allegations were mounting.

The arrest of Ricaurte, who was chief justice in the years dozens of congressmen appeared before the Supreme Court for their alleged ties to paramilitary groups, has discredited the presumed innocence of powerful politicians absolved by the judges now under criminal investigation.

The most prominent of these politicians, former Vice-President German Vargas, was absolved by former Supreme Court president Leonidos Bustos, an alleged member of the corruption Ricaurte allegedly belonged to.

Martinez’ delegate prosecutor before the Supreme Court, Luz Mabel Parra, reportedly was the auxiliary judge who led the dropped investigation against Vargas, now one of the leading candidates in the race leading up to the 2018 elections.

According to political news website La Silla Vacia, Ricaurte was the “visible head” of “a group of judges who took power in the justice system at the tip of ‘I choose you, you choose me’.”

However, this alleged network of clientelism could have members throughout Colombia’s state system.

To what extent one prosecutor is able to unravel this is the big uncertainty as those suspected of criminal behavior are the ones who effectively control the system.