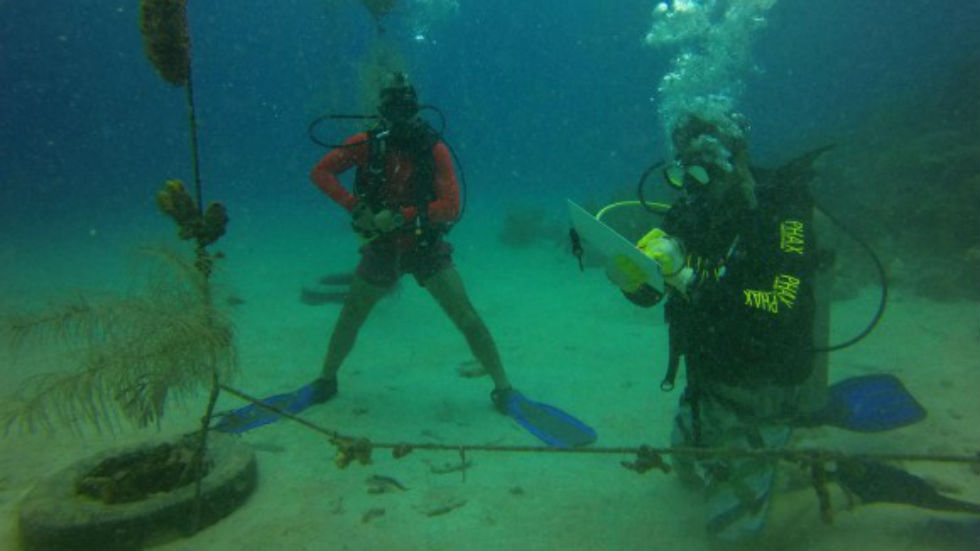 Colombia’s San Andres island will sow more than 10,000 new corals to restore coral reef that has been damaged by excessive tourism and the effects of climate change, reported local media.

Tires, batteries, plastics and even a military rocket made up part of the 17 metric tons of waste that was removed from the water of the 10-square-mile island in a recent clean-up operation.

Locals and NGO’s seek to rejuvenate the reef that contains 77% of Colombia’s coral.

Locals have become involved in the “Bajo Tranquilo” initiative, which is described as a “voluntary citizen movement” as they seek to battle against the negative effects of tourism and climate change in the hope of restoring the reef  off Colombia’s three Caribbean archipelagos including  Providencia and Santa Catalina.

“Citizens, especially the recreational divers, want to do something because they are aware of a problem,” said Jorge Sanchez, a member of the Help 2 Oceans Foundation, reported newspaper El Espectador.

“We have completed 17 tons of extraction,” said the project leader, who initially tackled an area of ​​62,000 square meters and will subsequently take on the challenge of rehabilitating another 128,000 square meter area in the Seaflower Biosphere Reserve.

So far, the campaign has also managed to release trapped species such as starfish, crabs and sea urchins, as well as preventing others from ingesting debris.

While in some ways San Andres has paid an environmental price for the increasing numbers of visitors, the effects of climate change are also taking their toll on the Caribbean paradise.

A report on climate change presented last month by the Institute of Hydrology, Meteorology and Environmental Studies of Colombia (Ideam) and the United Nations Development Program (UNDP) revealed that the popular island, which has some 85 species of coral, will be the territory most affected by climate change in the country.

“There is a very big concern about that impact. The change of temperature and the acidification of the oceans is killing the corals, “the founder of the Colombian Environmental Movement, Camilo Prieto , reported El Colombiano newspaper.

Following the clean-up phase and the treatment of existing coral, the crucial part of the project will be the plantation of the new corals, which aims to safeguard the future of the reef in the tourist hotspot.

“Tourists look for places like these to focus on rest and relaxation, and we want to invest in that relaxation by caring for and protecting ecosystems and species,” said Prieto.

“As a solution to the deterioration of reefs, we set ourselves the goal of undertaking the largest large-scale coral reef restoration in the country,” added Corals of Peace director Phanor Montoya.

The strategy for rejuvenating the reef will be modeled on that of the Seychelles in the Indian Ocean where biologists managed to grow more than 40,000 coral colonies and transplant them to a degraded reef.

In San Andres, it is expected that it will take between 12 and 15 months for the new species to be grown and within two years it may be possible to double the natural recovery rate of the reef and the number of fish.

Local authorities will introduce other “conservation practices, including suppressing parrotfish fishing, and socializing the strategy in communities,” according to Montoya in order to maximize the success of the project.

Originally claimed by the Dutch – then the British, the Spanish, the British again, Guatemala, New Granada, Gran Colombia, and eventually Colombia – the little island of San Andres has had a colorful past.

The locals claim that San Andres’ coral reef is the third largest in the world, and there are around 30 diving spots, many reachable from the shore.

A couple of shipwrecks, lots of coral and an impressive underwater wall, where the sea floor just falls away into the depths, make it a very popular destination for diving.

The island’s shady past, decorated with stories of pirates and privateers has provided it with a graveyard for boats, both seized and scuttled, adding to its underwater attractions.

The message however, to locals and tourists alike is that action must be taken now before it is too late to the secure the future of the coral reef and other rich marine life around the island.

As Montoya put it, “without reefs we would not have tourism, coastal protection or fishing.”