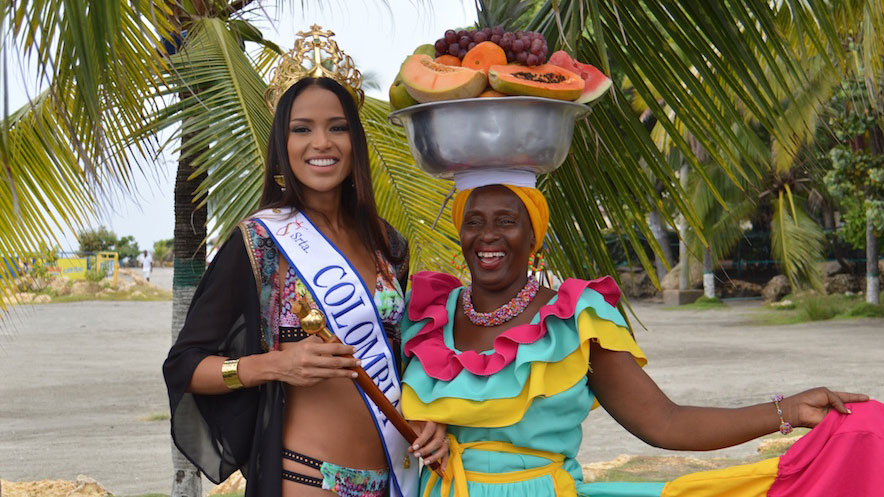 Colombia’s got a thing with beauty pageants. Traditionally, these events are tied to promoting agriculture, but the phenomenon has expanded to include donkeys and 7-year-old girls in bikini.

Colombia is a country with one of the greatest number of beauty pageants in the world. The BBC calculated that the Andean country holds 3,794 pageants annually, more than 10 a day.

In every corner of the country, women and girls compete in competitions to become either Miss Colombia, Miss Yucca, Miss Pineable, imagine any tropical fruits and Colombia likely has a beauty pageant for it.

The reason for this is that traditionally regions’ or towns agricultural produce would be celebrated in an annual festival and promoted by the prettiest girl in town.

While scrutinized by feminists for representing demeaning archetypes, Colombia reveres its beauty pageants as an important cultural custom — holding festivals in which girls dress and express the fruits, vegetables and animals that are traditional to the country.

Nevertheless, some are between somewhat strange and downright weird, like the following.

Somebody should tell satirical magazine The Onion about this one.

During traditional festivals in central Colombia’s Boyaca province, the communities come together for the National Miss Onion competition during a festival dedicated to Chicha, an artisan corn beer made from the fermented maize.

If you want to participate in this pageant, you don’t just have to be pretty, but must know everything there is to know about onions. As most other pageants, the Boyaca beauties will strut their culinary knowledge in bathing suits and custom dress.

Since 2013, Cordoba in the Caribbean coast has celebrated the Queen of the Clean Bun, an indigenous dish reminiscent of the famous tamale — mashed yucca or corn wrapped and steamed in leaves.

The unique item originally comes from the Caribbean, and has become a prevalent commercial food product in the coastal Cordoba.

The most important quality for Miss Clean Bun is to have extraordinary knowledge about the dish’ authentic preparation, which has been passed down for generations.

In Risaralda, in northwestern Colombia, Chickens are dressed in the best costumes from designers exclusively assigned to them for the Miss Chicken contest.

The Miss Chicken pageant was organized for the first time in 2006. The contestants are judged on how well their muscles, the plumage and the comb (the distinct red flesh on the head) of the hens developed.

Donkeys are one of the most abundant animals in nearly the entire Colombian coast. In fact, some say Colombia would not be what it is today had it not been for the ardent labor of donkeys that helps construct roads and railroads in the most impossible mountain areas.

In Cordoba, a Caribbean province, the locals decided to dedicate their annual festival to the beloved animal and elect a Donkey Queen and King in honor of the hoofed mammal.

The festival originated from the tradition of burning the Judas Iscariote, represented as a doll mounted on a donkey that walks with the village throughout Holy Saturday.

However, over time the tradition evolved to include arguably the funniest beauty pageant in the hemisphere, in which dressed-up donkeys parade with their furry female counterparts. However, rather than being judged for their physique, the donkeys are dressed up as celebrities and poke fun at local and international politics. Basically, the funniest ass wins the competition.

Possibly one of the weirdest and most disturbing beauty pageants in Colombia is held in Barbosa, Santander. At this beauty pageant, girls as young as seven try to become the children’s version of Miss Thong, a beauty pageant dedicated to women’s buttocks. While supporters of the event say the children’s pageant is a 20-year-old tradition, authorities are trying to shut it down because, well, go figure.

However, parents who were interviewed at last year’s Little Miss Thong competition, said the annual event “has nothing to do with prostitution and child pornography. Like a career in modelling, it is something that is done innocently: it’s a dream. What little girl does not dream of being a princess or queen?”

Colombia’s family Welfare institute disagrees and, after not doing anything for 20 years, called it a “shameful violation of the rights of girls.”