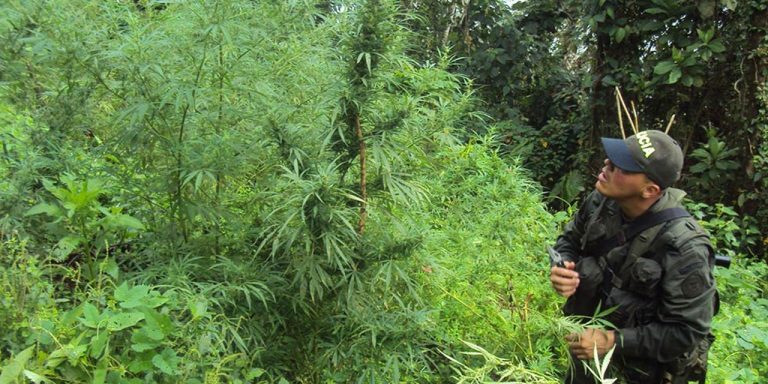 Colombia’s Prosecutor General’s Office has ordered all power to be cut in a largely lawless area in the southwest of the country in an attempt to disrupt marijuana cultivation.

The prosecution ordered the Western Energy Company, or CEO, to cut power supplies in four municipalities in the Cauca province known for their large number of illegal marijuana plantations.

The measure, set to take effect next week, aims to combat Colombia’s growing problem of illegal crop cultivation in the area.

The problems with weed farms

According to Cauca’s Government Secretary Ricardo Caufrentes, the measure aims to “deactivate and disconnect greenhouses where the illegal crop marijuana is produced,” requiring that all four municipalities be “subjected to a blanket blackout”.

Former chief prosecutor Nestor Humberto Martinez was the first to table this idea back in November 2018. In a radio interview with Radio Caracol, he advocated such a measure, claiming that “If there is no energy to run these greenhouses, marijuana cultivation will be halted.”

The Western Energy Company have also complained of the impact of weed farms on their operations. In a statement justifying the measure, they reported that “third parties constantly, without company authorization, access electricity networks or make modifications, extensions and charge increases”.

The energy firm also referenced the tendency of these greenhouses to cause power cuts due to the large amount of power they draw from the system.

They also complained how “our technical people are constantly at risk and prevented from carrying out repairs” because of the activity of illegal armed groups.

Opposition to the proposed policy has been met with widespread condemnation from local leaders.

Cauca Governor Oscar Campo said he opposed the measure on the grounds that it unjustifiably impacts those not involved in illegal cultivation.

This would be a viable option if the whole population was involved in illegal activities, but this is not the case. And neither will simply shutting off the lights improve things.

Campo’s opposition was echoed by other public officials in the area, such as Diego Aguilar from the municipality of Argelia, who acknowledged the need to combat the growing rate of illegal crop cultivation but called on the government to explore different routes in eradicating it.

Social investment and the implementation of employment initiatives to improve the quality of life and options available for the people in this region will be vital in nudging them away from illegal cultivation, he argued.

The Mayor of Corinto, a municipality within Cauca set to be hit by the proposed power cuts, was also fiercely vocal in his opposition to the measure, criticizing it as one-dimensional.

“Power cuts have been happening in the area for several years” he stated “and they are not the solution”.

What happened to crop substitution?

The 2016 peace deal mandated the implementation of initiatives giving assistance to farmers in underdeveloped regions and allowing them to substitute illegal crops for legal alternatives free from the threat of prosecution.

These measures are strongly supported by the UN and local experts, and since May 2017, these schemes have eradicated 33,000 hectares of coca plant cultivation alone. However,  the effectiveness of the programs have stalled in the face of vociferous opposition from the Duque administration.

Duque has since claimed that his preferred policy of using the security forces to eradicate illegal crops has produced better results than crop substitution programs, but the social cost of such programs is often catastrophic.

His government have also come under fire for advocating the use of the herbicide glyphosate in the fight against illegal crops. While it is effective in killing these plants, it also happens to kill most others, is suspected to cause cancer and is environmentally and socially disastrous to boot.