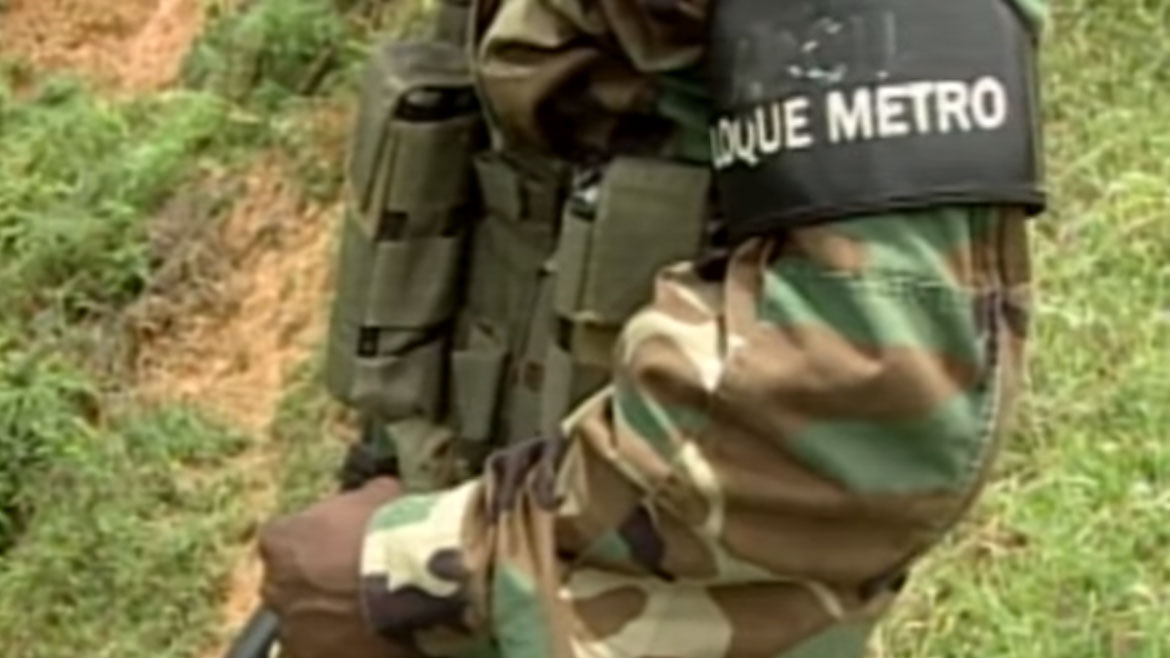 Colombia’s prosecution misinformed the court in an apparent attempt to counter claims that former President Alvaro Uribe founded a paramilitary group in the 1990’s.

In a report on the “Bloque Metro,” the prosecution’s Strategic Center for the Validation of Evidence claimed that the paramilitary group “made its first appearance in July 1998, handing out flyers.”

This would be “two years after the family of [former] President Uribe had abandoned the (northeast Antioquia) region completely after the sale of Guacharacas,” the former president’s former family estate.

“At that time,” the former president, “his wife Lina and their two sons, Tomas and Jeronimo, were living in Oxford” in the United Kingdom, according to the prosecution.

In other words, Uribe couldn’t have co-founded the paramilitary group because he was out of the country, according to the 155-page prosecution report that cited “investigators of the paramilitary phenomenon in Antioquia like NGO Conciudadania.”

Unfortunately for the prosecution and the former president, Conciudadania claimed that the Bloque Metro was active in 1997 already when Uribe was still governor of the Antioquia province.

In a 2012 report on the armed conflict in eastern Antioquia, the NGO said the first public threat signed by the Bloque Metro appeared in the town of San Carlos in December 1997.

Peasants, stay away from the guerrillas. Guerrillas, it’s either you or us; the total war is beginning.

“These threats extended to all the municipalities in the region with different methods, including the use of small airplanes that dropped flyers,” according to Conciudadania.

The Medellin Superior Tribunal said in 2016 that the group led by the US-trained former army captain “Doble Cero” “was founded in March 1996 when [paramilitary group] ACCU decided to take the area” around the Uribe family estate.

According to the court, the group committed its first massacre in June 1996 at just five kilometers from Guacharacas.

The same court confirmed last year that “in March 1996, after the ‘torching of the Guacharacas estate’ [by ELN guerrillas], the leadership of the group took the decision to sent forces to the northeastern, southeastern and eastern regions  of the Antioquia province,” according to a document on the prosecution’s website.

Former paramilitaries have also confirmed that Uribe and his brother Santiago were involved in founding the paramilitary group, which allegedly used their family estate as base.

Former AUC member Pablo Hernan Sierra, one of the key witnesses against the former president, testified in 2011 that “the founders of that paramilitary group were, apart from the brothers Alvaro and Santiago Uribe, cattle rancher Luis Alberto Villegas, his brother Juan Guillermo Villegas Uribe” and former Medellin Cartel drug trafficker Santiago Gallon. 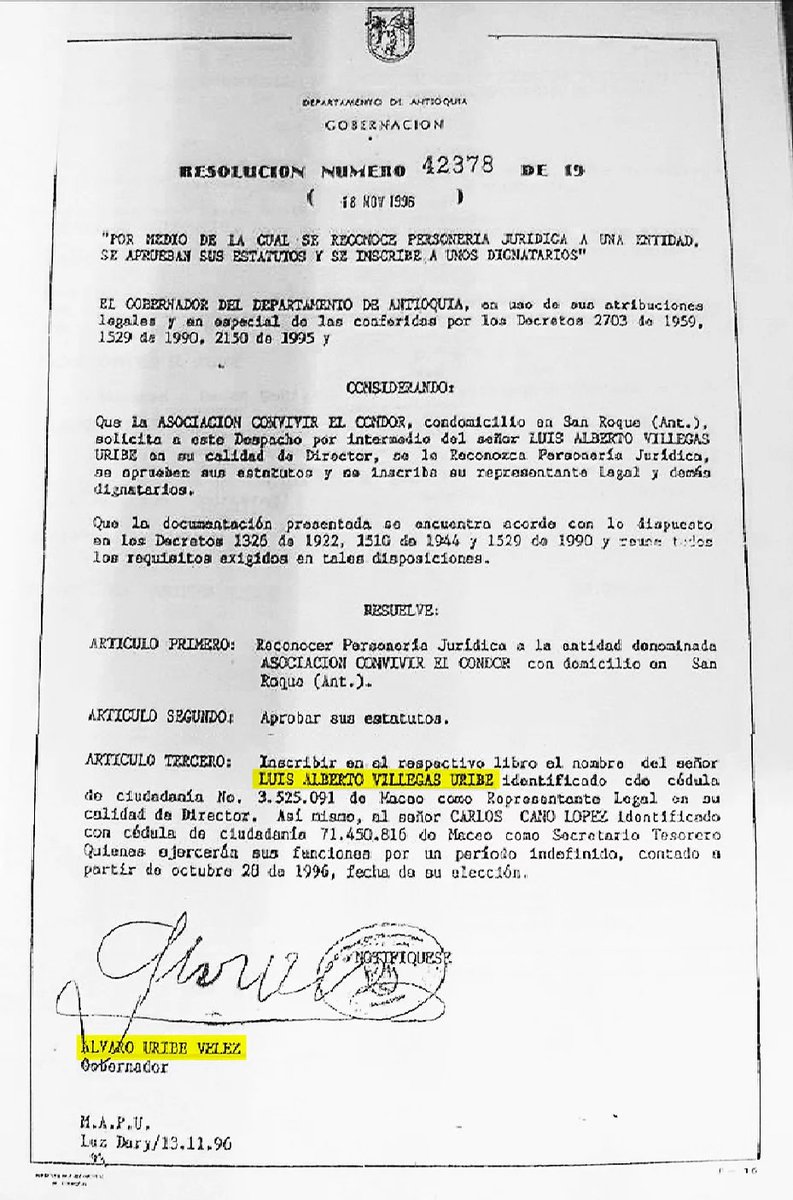 The license was approved by Superintendence for Private Security within a week. 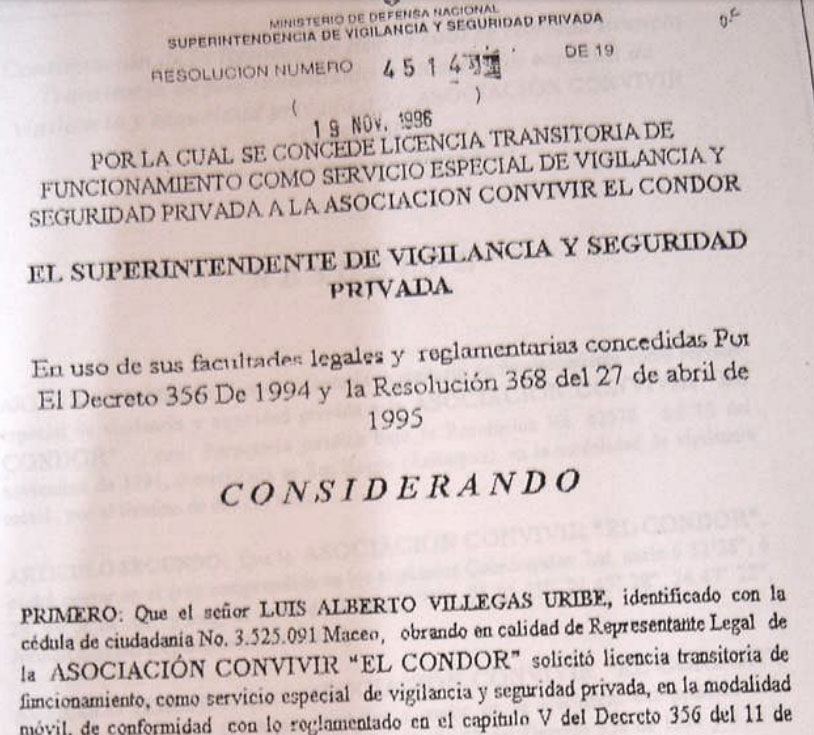 The prosecution seems to have forgotten that the Medellin district prosecution received complaints that paramilitaries were ordering local businesses to contribute to El Condor in April 1997, according to news website Verdad Abierta.

Prosecution officials wiretapped Villegas for months and concluded the locals were correct on April 28, 1998.

El Condor mimicked a paramilitary organization and operated between the municipalities of Cisneros and San Roque, had its base of operations in the hamlet San Jose del Nus in San Roque and carried out illegal activity in open collusion with the police and members of the military stationed in the region.

A deserted ELN guerrilla, Julio Cesar Acosta, testified in May 1998 that the Villegas brothers bought rifles for the paramilitaries a year before.

“I don’t know how many rifles they asked for, I know they brought about forty rifles, they brought them by helicopter,” according to the army collaborator.

The prosecution raided Villegas’ home in June 1998. The prosecution found arms and evidence that the boss of El Condor had been doing business with Uribe since 1984.

Villegas was arrested, but absolved by a local judge in November 1999 in spite of the evidence and testimonies.

A February 2020 court document on the prosecution’s own website confirmed that the Bloque Metro was founded in March 1996.

Testimonies of late paramilitary fighter John Fredy Gonzalez and Sierra confirmed Uribe was involved in the formation of the paramilitary group and that his family estate was their home base.

Gonzalez was assassinated shortly after leaving his statement, but Sierra has refused to retract his claim that the paramilitary group was founded after the ELN attacked the Uribe family estate and stole 600 pieces of cattle in February 1995.

Juan Pablo Sierra: The origin of this group and the base of this group is the Guacharacas hacienda. What is going on? Look, in this region, this is the story that I have been telling, the Uribe family has a farm there, everybody knows about it.
Prosecutor: The Uribe family, right?
Juan Pablo Sierra: Yes sir, it is the Guacharacas estate. So, in this ranch they stole 600 pieces of cattle at that time… they stole cattle there, I don’t know the exact year… So, this group, these guerrillas steal their cattle. Then the Villegas family, the owners of some farms in San Jose del Nus, who were being harassed by the guerrillas as well as Mr. Santiago Gallon, the owner of the La Quesera farm. The caretaker of that farm was always Robert, Robert was the general administrator of the Gallon family in this region; so these people are the ones who pay Filo, they are the first ones who begin to finance this group together with Santiago Uribe. That’s why I mention President Uribe, they all begin to finance this group to get the guerrilla out of there. to get the guerrilla out of there.

According to former Bloque Metro member Javier Alonso Quintero, the paramilitary group helped Uribe become president in May 2002, more than half a year after the US government had declared the AUC a foreign terrorist organization.

Prosecutor: While you were in the Bloque Metro, was there any interference of the Bloc in the election of mayors, councilmen, congressmen, congresswomen, of the president of the republic, in which the civilian population would be intimidated to demanded to vote for candidate A, B or C?
Javier Alonso Quintero: Yes of course, it was my turn to do the presidential elections of 2001 or 2002 I think it was, that was for the president of Mr. Alvaro Uribe, and we had to pressure all the Northeast to vote for Mr. Alvaro Uribe’s name, because that was the order of Rodrigo Doble Cero.

Sierra added the former president’s brother continued being involved with the Bloque Metro until after Uribe became president in August 2002.

Juan Pablo Sierra: One day Juan was with Santiago Uribe, asking stuff, and the subject of ‘Granda’ came up. Granda’, So Juan says: “no, he’s with the self-defense groups, he’s in the group from the east.” “What do you mean that son of a bitch is over there, I don’t know what, bring him in,” ordered Santiago Uribe. The president’s brother gave the order to pick him up in the east, to take him to Providencia and ‘Darío Granda’ was tried at noon there and they killed him, I believe they killed him on December 19, 2002, in Providencia.
Prosecutor: And how did they do the trial? What was it like? How did it go?
Interviewee: It was for the burning of the Uribe farm and for all the misdeeds he did in that region.
Prosecutor. Who did it?
Juan Pablo Sierra: I don’t know who took the shot exactly. I don’t know, but by that time the group was already formed.

To add insult to injury, the prosecution’s latest report confirmed it contradicted its own “evidence gathered by the Justice and Peace Law” that “noted that in 1995, months after the burning of the Guacharacas estate, the Bloque Metro was born in the town of San Roque.