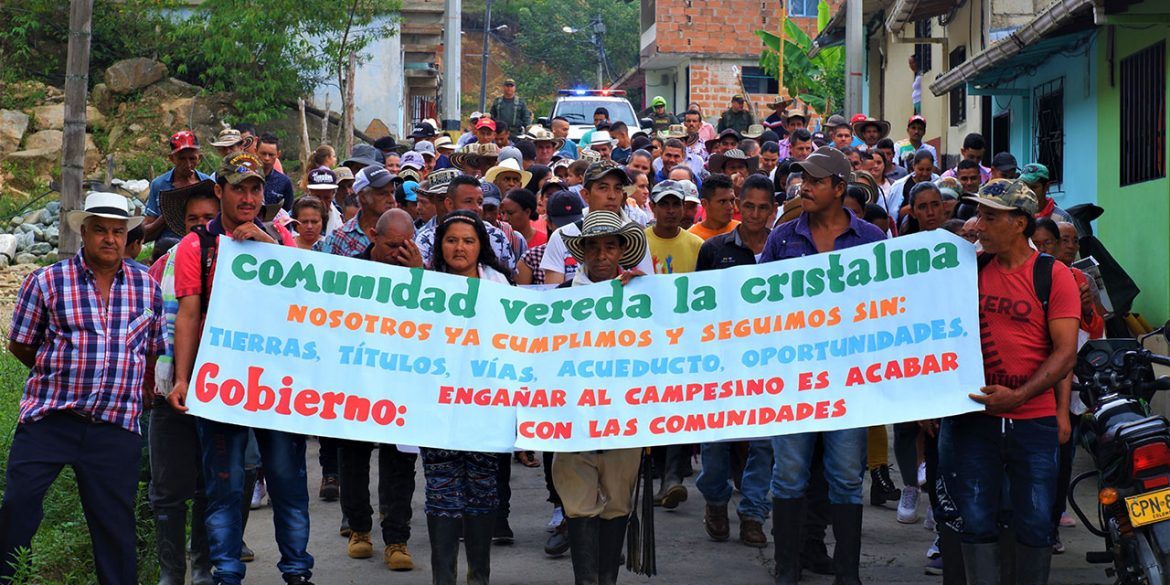 A sign at the march from the hamlet of La Cristalina reads: “We lived up (to the agreement) and continue without: earth, titles, roads, an aqueduct, and opportunities. Government: Cheating campesinos means destroying communities.” (Image by Alex Diamond)
News

Former coca farmers from Colombia’s “Peace Laboratory” fear a return to war if the government doesn’t live up to the peace process’ coca substitution program.

Briceño, a municipality of 8,000 people in northern Antioquia, was supposed to be an example for the rest of the country to follow.

It was here, with a legacy of 35 years of guerrilla presence, that the Colombian government and the Revolutionary Armed Forces of Colombia (FARC) started a 2015 humanitarian demining program, their first collaboration as part of the Havana peace negotiations.

It was here, with much fanfare and a visit from then-President Juan Manuel Santos, that the pilot coca substitution program, negotiated in the peace accords, was launched in 2017.

It was here, with an economy previously based 90% on coca, where “campesinos” voluntarily uprooted more than 99% of their coca plants, putting their faith in a substitution program that promised economic subsidies and productive projects to help them transition to licit agriculture.

And it was here, on February 21, where hundreds of campesinos took to the streets in a peaceful march to protest the government’s failure to live up to the agreement—a failure that they say has led to economic collapse and massive rural displacement.

Yaned Holguin, a leader and single mother from the hamlet of Chiri who traveled three hours to join the march, entered the substitution program excited to replace her coca crops with cacao.

In June 2017, she received the first payment of a yearlong subsidy meant to sustain her while she planted her new crops, and immediately pulled out her coca, waiting for three levels of productive projects. And (like everyone else in Briceño) she waited.

It wasn’t until October 2018 that she finally received cacao plants—but without the needed (and promised) fertilizer, tools, and goods to plant them. Holguin had to take out a loan from the bank to buy the goods she needed in order to avoid losing them. 32 months after pulling out her coca, she’s still waiting for the majority of promised goods.

“We campesinos feel tricked by the government because when they arrived in our hamlets with a proposal to substitute our coca for licit crops, they offered us an endless number of things,” Holguin says.

But everything was just a dream. We’re poorer than we were before, because now we don’t have any way to make money. We had to use the subsidy they gave us to pay for food, the productive projects haven’t been seen, the communities are being abandoned because there isn’t employment, and campesinos are suffering from hunger.

Genaro Ruiz, President of the Municipal Commission of Participatory Planning, emphasizes that as part of the substitution agreement, campesinos and state officials signed agreements stipulating when productive projects would be distributed.

In actual fact, the first and cheapest level of projects, meant to develop family farms, was distributed after a year and two months, and more than two and a half years after coca substitution began in Briceño, most people have received little to nothing of the bigger productive projects.

The result, say community leaders, has been economic collapse and, without sources of employment, a massive displacement.

Carlos Andres Perez, president of the hamlet of El Morron, says Briceño’s most isolated communities are full of empty houses, “turning the countryside into a ghost town.”

He stresses that without the promised productive projects, the territory is likely to further empty out.

The challenges of substitution: replacing a reliable rural economy

Mauricio Quiroz has an infectious laugh and an affable manner that immediately puts you at ease. He is president of the hamlet La America, which, before coca substitution began, was home to more than 100 families. Only 35 families remain.

Quiroz credits nearly twenty years of working with coca for giving him enough money to buy the farm where he lives with his wife and three children.

He began picking coca for a daily wage before raising enough money to administer his own coca crops on rented land, and finally buying his own farm.

In addition to its profitability, the customary land tenure arrangements permitted by coca, in which the cultivator paid 10% of his earnings to the landowner, are one of the reasons it paved the way for upward mobility and land ownership for young men like Quiroz.

Though historically a male-dominated economic activity, coca also provided jobs for women who cooked for workers and created a market for food products—the constant employment offered by coca meant that many were too busy to grow their own crops.

Coca, an unassuming light green shrub, provides four to five harvests a year; Quiroz says that when his crops weren’t producing, those of one of his neighbors invariably were, and needed pickers.

In contrast, the coffee plants that cover his farm offer only one yearly harvest, roughly from October to December. 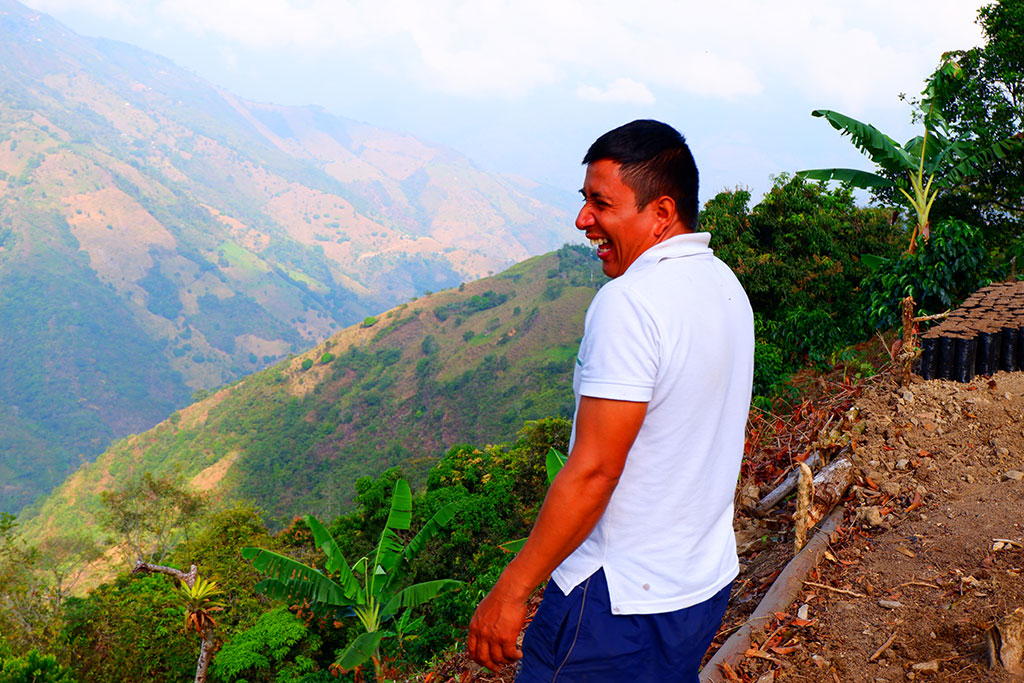 Mauricio Quiroz looks out over his coffee fields in Briceño. (Image by Alex Diamond)

Coca’s consistent job creation is at the center of one of the first comparisons ex-coca farmers make when talking about the challenges of transitioning to licit agriculture. Another has to do with coca’s easy commercialization.

A kilo of coca base, which sold for between 2.1 and 2.5 million pesos (roughly $800 at the time of coca substitution), can easily be put in a backpack and carried to buyers.

Alternative agriculture products that grow in the area—corn, plantains, beans, cacao, and coffee—are much heavier and cheaper, generate transportation costs that may surpass purchase prices, and in many cases cannot even be sold in Briceño.

Campesino leaders say they need not only productive projects, but infrastructural improvements—roads, a distribution center, and guaranteed routes of commercialization–to help them sell their products.

Despite its clear economic advantages, Briceño’s leaders stress that returning to coca is not an attractive option because of the violence it brings.

The village has been disputed territory between the FARC and right-wing paramilitary groups since the late 1990s, primarily, according to information collected by the authors, because of its natural resources (particularly water and gold), coca production, and strategic location along drug smuggling routes that lead to the Caribbean Gulf of Uraba and the Panamanian border in the western province of Choco.

Throughout this time, battle lines, invisible borders, and territorial control have been dynamic, and the resulting violence has alternately intensified, abated, and periodically shifted in location.

Locals describe 20 years of a terrifying coexistence alongside multiple armed groups, with nearby gun battles, land mines, and periodic forced displacement becoming a normal part of their daily existence.

Locals stress that since the arrival of the peace process, Briceño has lived an era of increased peace and tranquility. Because of this, Mauricio says, “if we return to the same, it doesn’t make sense. It will only bring more violence.”

Despite its problems, Briceño is the municipality where the National Program for Integral Substitution of Illicit Crops (PNIS) has advanced the furthest in Colombia.

In addition to Briceño, the program was launched in 2017 in four other municipalities with a long history of coca cultivation: San Jose del Guaviare, Tibu, Tumaco, and Puerto Asis.

Subsequently, hundreds of organizations from 12 departments also solicited inclusion in crop substitution. Initial collective agreements covered 132,000 campesino families, though later the government decided families needed to sign agreements one by one. 99,970 families eventually signed individual agreements to enter the substitution program, agreeing to pull out their coca within two months.

Under the program, more than 40,000 hectares of coca have been voluntarily eradicated “without firing a single shot,” according to Guaviare Deputy Carlos Coy.

The United Nations Office on Drugs and Crime (UNODC) was in charge of verifying that campesinos pulled out their coca. Where the program was instituted, they found that families did indeed follow through.

In their last report, the UNODC described visiting more than 100 farms which, after two and a half years, had not returned to coca cultivation.

According to the SIMCI report from the UN, coca crops were reduced in San Jose del Guaviare by more than 2,000 hectares, and in Tumaco in almost 4,000 hectares, leading campesinos to state that their willful efforts had diminished coca cultivation.

This stands in striking contrast to the results of forced eradication. While lands where voluntary substitution has taken place have seen a replanting rate of only 0.4%, when force is used replanting rates are more than 45%.

These rates exceed 80% when the government uses aerial fumigation, where small airplanes dump the toxic herbicide glyphosate on coca crops and whatever else is nearby.

These figures match the experiences of Briceño, where campesinos experienced various campaigns of manual eradication and fumigation.

Without state investment in alternative economies, they were left no option other than to replant their coca.

However, and also in tune with the experiences of Briceño, the numbers show the weaknesses of the substitution program.

The promised subsidy payments haven’t reached all the enrolled families, only a third have received the food security projects of 1.8 million pesos ($530 USD), many have not received agricultural technical assistance, and only 476 have arrived to the stage of the short-term productive projects (a number comprised entirely of families in Briceño who solicited projects based on coffee cultivation).

Meanwhile, 40,000 enrolled families are still waiting for the program’s aid.

The program has been particularly under fire since August 2018, when Ivan Duque took over the presidency from Juan Manuel Santos, whose administration negotiated crop substitution as part of the peace agreement.

The Duque government has closed the doors to new inscriptions in territories where PNIS never arrived, including in national parks, indigenous reservations, and Afro-Colombian communities.

Additionally, the government recently removed the UNODC from the process, wants to create a new (and as yet unelaborated) substitution program, and argues that it doesn’t have the resources to follow through with the agreement for all the enrolled families, blaming the Santos administration for the failures of PNIS.

Finally, the Duque administration is seeking to bring back the aerial fumigation of coca crops with the herbicide glyphosate—this despite the fact that the agrotoxin is prohibited in 18 countries and the European Union is considering a ban of its use for commercial agriculture.

This would make Colombia the only country in the world to use glyphosate for this purpose and worsen the already difficult humanitarian situation suffered by campesino, indigenous, and afro-descendent communities. 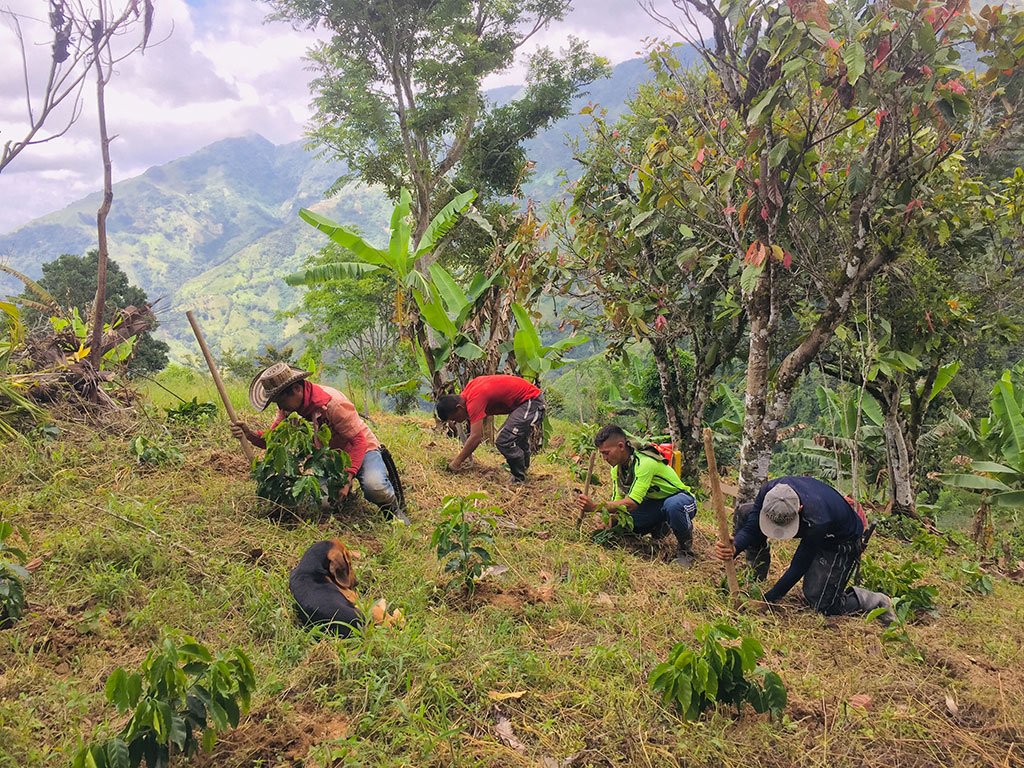 On February 21, even as Briceñitas took to the streets to protest the ways coca substitution has been implemented in Briceño, they reaffirmed their support for the idea of substitution.

In the context of a national climate in which substitution has been criticized and the national government increasingly pushes for forcible eradication and fumigation of coca crops, local leaders know that the outcome of the pilot coca substitution program in Briceño is of utmost importance.

Richard Patiño, President of ASOCOMUNAL (the Association of Community Action Boards), who organized the protest, points out that campesinos voluntarily pulled out more than 500 hectares of coca in record time: “In less than two months, we eradicated the coca in our territories and from our lives.”

Patiño and other leaders have decades of experience with both fumigation and eradication, experience that shows them these coercive responses to coca only lead to more rural poverty, more mistrust in the Colombian state, and eventually, the replanting of even more coca by desperate campesinos without better options.

“Substitution,” Patiño says, “is the only effective method to end illicit crops in the territory and to eradicate extreme poverty.”

As Colombia seeks to end decades of conflict and drug trafficking, he and other local leaders still hold out hope that promised governmental aid will arrive and Briceño can regain its status as the Peace Laboratory, an example for the rest of the country to follow.

But this depends, as Richard says, on whether “the government does its part”