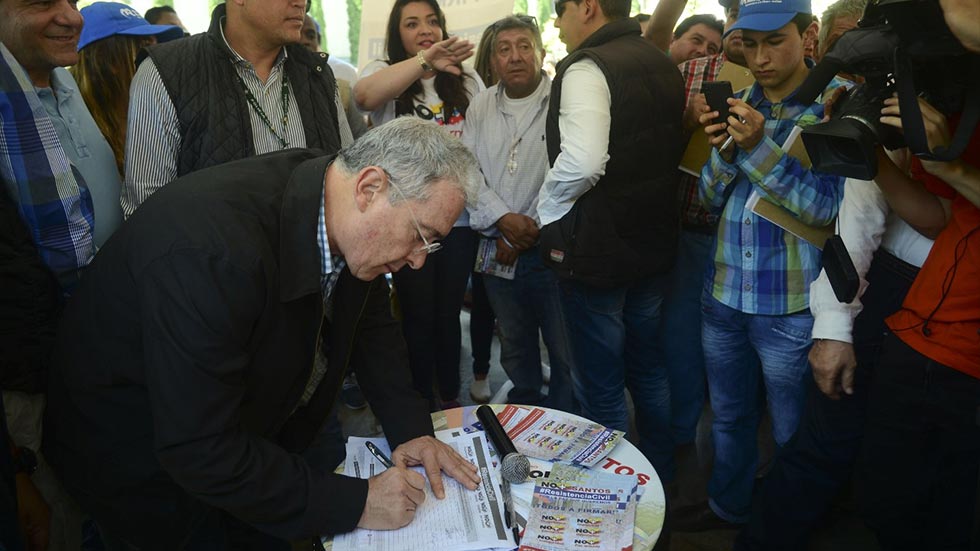 While such deal would end more than half a century of violence, the opposition — supported by many Colombian — feels the deal being negotiated with the FARC is too soft on guerrilla war crimes.

The FARC, founded in 1964, is suspected of tens of thousands of war crimes. However, under the condition they fully cooperate with justice none will have to go to prison, but be punished by other forms of “restricted liberties.”

State officials and politicians, including Uribe, are also suspected of having carried out tens of thousands of war crimes. They are offended that war crimes committed by the military or other state actors are submitted to the same transitional justice system as the FARC.

Convicted guerrillas and state officials alike will have to go to prison if they only partially cooperate with justice and can even face up to 20 years in prison if they refuse to cooperate.

Additionally, the opposition is against a political participation deal that would allow the FARC to enter politics following their demobilization and disarmament.

To gather support, Uribe and his Democratic Center party have begun asking people to sign the “manifesto for the peace we want” in major cities like Bogota and Medellin.

Additionally, Uribe has called on civil resistance to a possible peace deal, claiming a peace deal would contain “concessions to terrorism that generate the risk of living the same painful tragedy as Venezuela,” which is undergoing a major crisis, mainly due to its leftist government.

While Uribe’s objections to the transitional deal with the FARC is shared by the majority of the Colombians, pollsters expect that the full peace deal will be ratified by a majority of Colombians.

Peace with between the FARC and the state would put an end to 50 years of fighting between the two parties. However, with the smaller ELN rebel group and paramilitary successor groups like Los Urabeños also still carrying out political violence, chances of absolute peace in Colombia remain small.