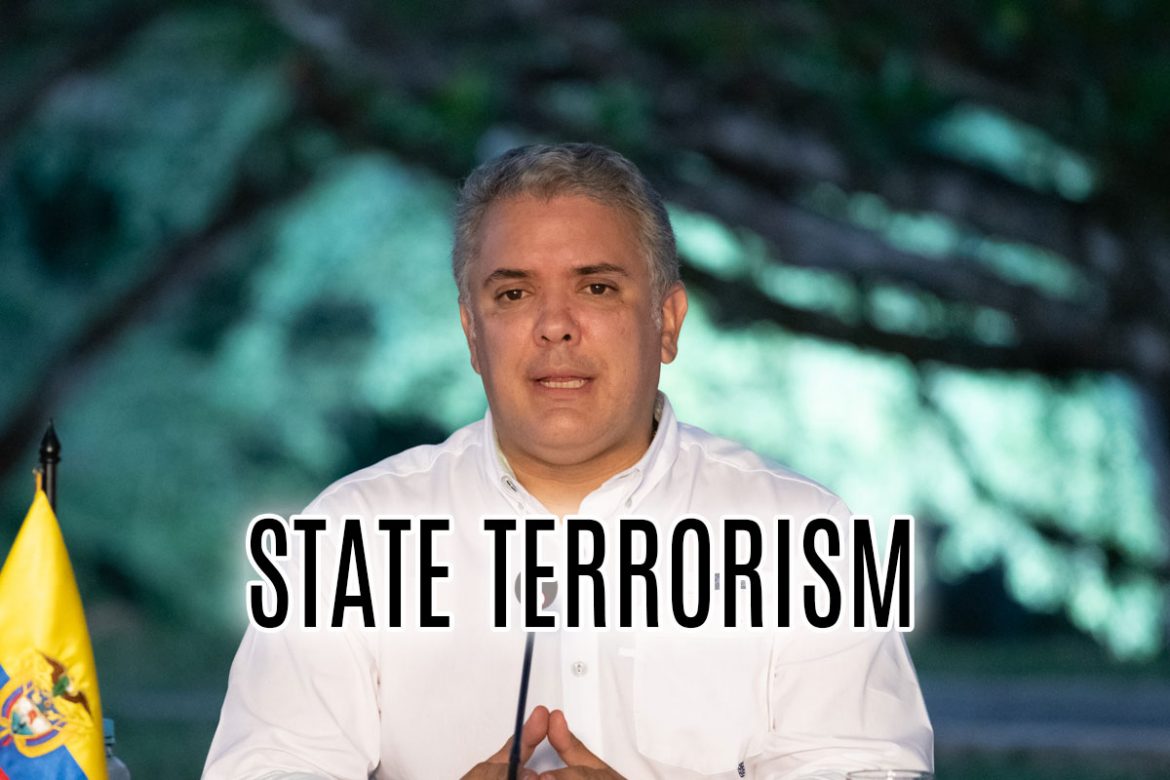 The attempts of the government of Colombia’s President Ivan Duque to legalize terrorism could get him in trouble with the International Criminal Court (ICC).

Duque won’t have to worry about Colombia’s justice system as his presidential immunity allows him to commit mass murder on national television and still walk free.

The ICC, however, doesn’t give a rat’s ass about Colombia’s constitution and exists exactly to hold delusional government officials who engage in terrorism accountable.

Definition: Law 599 of 2000 defines terrorism as the act of provoking or maintaining the population or part of it in a state of anxiety or terror through acts that endanger the life, physical integrity or freedom of people, or buildings, media, transport, the processing or transport of fluids and road infrastructure, using means capable of causing havoc.

The conviction of Serbia’s late President Slobodan Milosevic showed that a government official doesn’t even have to actively take part in, for example, a massacre to be sentenced to prison in the Hague. Being complicit is enough.

Duque and Uribe only have to be part of  “a small group of senior political and/or military leaders [who] agree on the execution of a sole criminal conspiracy through the use of the various organizations they lead” and commit crimes against humanity, according to International Criminal Law professor Hector Olasolo of the Rosario University.

The legitimate use of state force

This would be the case if, for example, Duque authorized late Defense Minister Carlos Holmes Trujillo to allow the use of deadly force to quell protests during the Bogota Massacre in which 13 people were assassinated by police in September last year.

Trujillo, may he rest in peace, said that the police killing unarmed civilians fell under “the legitimate use of state force,” which was either nonsense or ignorant.

The Council of State reiterated in 2014 that the police’s “intentional use of lethal weapons is only allowed when strictly unavoidable in order to protect a life,” according to international humanitarian law.

The president may also have engaged in a criminal conspiracy if he was informed about the presence of victims of forced recruitment when Duque ordered the bombing of a dissident FARC guerrilla’s camp in August 2019 because he was pissed about the rearmament of the FARC’s former political chief, “Ivan Marquez.”

The rules of International Humanitarian Law “permit the use of lethal force against combatants and military objects,” not victims of the forced recruitment of minors who were not involved in any military attack.

“To be lawful, an attack can be executed only if it respects the principles of precautions in attack, distinction, and proportionality,” according to the European Journal of International Law.

Which of the criminal conspiracies?

The Colombian president’s efforts to obstruct his country’s war crimes tribunal may also be part of a criminal conspiracy to prevent justice over the execution of thousands of civilians under Uribe’s watch.

In fact, the attempts of Duque and his far-right Democratic Center party to obstruct justice for farmers whose land was dispossessed after they were subjected to random military force also look a lot like a criminal conspiracy of interest for the ICC.

The concerted efforts of the police and the prosecution to intimidate activists and media ahead of the 2019 anti-government protests, the extreme violence used against journalists and the mass detentions of peaceful protesters during these protests do too.

Duque’s filed criminal charges against his Venezuelan counterpart Nicolas Maduro following the violent crackdown of anti-government protests in 2017, an initiative I applaud, although it makes me wonder how the president got his law degree.

Following Duque’s complaint, the ICC said in December last year that “the information available at this stage provides a reasonable basis to believe that since at least April 2017, civilian authorities, members of the armed forces and pro-government individuals have committed the crimes against humanity” following the protests in Venezuela.

The same court said on the same day, however, that “the information available leads to the conclusion that there are reasonable grounds to believe that crimes against humanity as described in Article 7 have been committed by various actors in the situation in Colombia since November 1, 2002.”

The murder part alone should be a reason for concern for Duque, especially after criminal charges were brought by social organizations over the escalating assassinations of human rights defenders and community leaders.

Article 7(1)(a): Crime against humanity of murder

The “Uribistas” seem to believe there exists a rule that considers the killing of civilians legitimate “whenever some asshole with authority feels like it, except if that asshole is a leftist.”

I didn’t study law like the president, but I believe they’re wrong.