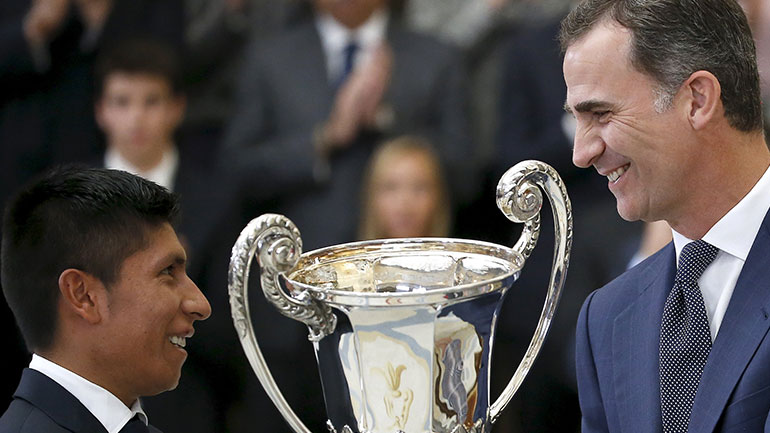 Colombia rider Nairo Quintana was recognized as the best Latin American athlete of 2014 Tuesday after major performances in cycling events like the Tour de France.

Quintana received the award from Spanish King Felipe in Madrid, where the ceremony was held.

“I am delighted by this very important award. To be here with the king and so many sport figures is a privilege,” stated Quintana after the delivery of the National Sport Awards in Madrid’s Palace of El Pardo. “I will carry it with love for my country, because they are the ones who support me in achieving these results.”

This summer, Quintana’s victory in stage 20 of the 2015 Tour de France secured him the title of King of the Mountain, Best Young Rider and second place in the overall classification of the world’s most prestigious cycling event.

Quintana was born in the central Colombian town of Tunja, the capital of the Boyaca province. Tunja sits at more than 9,000 feet above sea level, and the steep roads that wind up and down the eastern range of the Colombian Andes have made Boyaca a hotbed of world class cyclists.

Colombia is indeed a proud cycling country; past glories include Luis Herrera’s victory at the Spanish Vuelta in 1987, Santiago Botero’s Time Trial World Championship in 2002 and Rigoberto Uran’s silver medal in the London 2012 Olympics.

But the Tour de France is by far the most prestigious race in road cycling.

Nairo Quintana, only 25 years old and the youngest competitor in the 2015 Tour, has been internationally recognized for his impulse into social work in Boyaca, especially on gender equality. He was named a “friend of UNICEF”, the United Nations Children’s Fund, in October 2014.

The work of a ‘Friend of UNICEF’ is, in Nairo’s case, through sports, to raise the voices of young girls, boys and adolescents in order to defend the guarantee of their rights, and, additionally, to communicate for them effectively, represent a genuine interest in the problems facing children, and be able to serve as an influential advocate for children.

“As an athlete pedaling tirelessly to achieve my goals, those of my team and the dreams of my country, my responsibilities go beyond the bike. I am the father of Mariana, I am a man conscious of the need for each adult to engage with children and adolescents to build a better future,” Nairo stated.

With the recent award, Quintana adds more to his international fame and grabs the attention of sports enthusiasts around the world. His hope is to continue representing Colombia in the global arena, and to impact his own people with his positive story and accomplishments.

“He’s going to be the first ever Colombian to win a Tour de France,” predicted Spain’s Pedro Delgado, who spent a fair proportion of his career battling against Quintana’s idols such as Fabio Parra and Luis Herrera in the 1980s. “I don’t know if it’ll be this year but it’s going to happen for sure. He’s got a decade of good cycling ahead of him.”