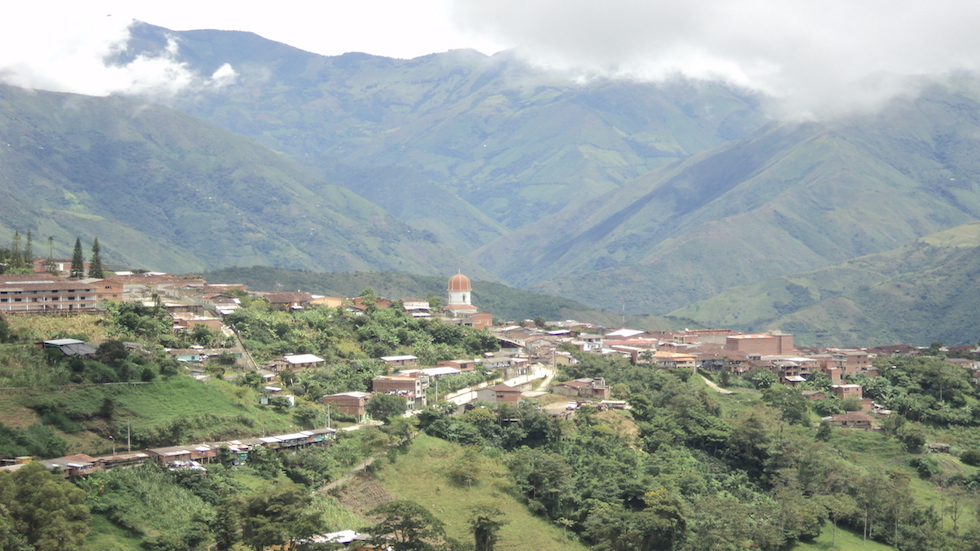 Colombia’s Ituango: in the crosshairs of the post-conflict

A wealthy man named Jaime Angulo was arrested on Monday for a crime committed nearly 20 years ago to the day, one that forever altered a town called Ituango.

According to authorities, Angulo was one of the intellectual masterminds behind a paramilitary incursion into Ituango in October 1997 that left 15 civilians dead and countless others tortured and sexually abused.

That month, over 200 paramilitaries–civilians financed by wealthy families and businesses to take up arms against Colombia’s leftist insurgency–swept into Ituango, reportedly with the support of a military helicopter.

For five days, the paramilitaries roamed the mountains of Northern Antioquia, systematically taking control of small, remote villages that make up the Ituango municipality.

For each village they entered, the armed men brought a list: the names of those they believed were collaborating with FARC guerrillas.

As they crossed the villages, paramilitaries burnt some to the ground; in others they openly killed civilians, all with the blessing of the Colombian state. 6,000 people fled their homes.

When they left, the paramilitaries took people’s cattle with them.

Following the massacre, an Ituango human rights defender denounced the collaboration between the state and the paramilitaries. Angulo had him murdered.

In the months and years that followed the 1997 massacre, paramilitaries, guerrillas and public forces ceaselessly battled for control over Ituango.

[The firefights] were so common, you got accustomed to them. They didn’t change anything. When the shooting started we wouldn’t even get frightened.

“Life here in the 2000s was hell,” a woman named Maria Durango added.

If anywhere was hell, this was it.

Ten years after the massacre, the Inter-American Court of Human Rights condemned the Colombian state for the crimes committed in Ituango and compelled authorities to investigate and prosecute those responsible.

Twenty years after the massacre, with only a handful of hollow investigations and leaden attempts to register and indemnify victims of atrocity, the people of Ituango still find armed resistance against their search for peace. 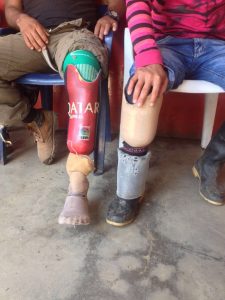 Victims of landmines in Ituango. 22% of all landmine related fatalities and injuries have occurred in Antioquia. In Ituango alone there are 223 victims of the improvised explosives. (Image credit: Nico Bedoya)

An emblem of the post-conflict

With the signing of a historic peace agreement last year, the half-century long conflict between the FARC guerrillas and the state that left 8 million victims in its wake came to an end.

As part of their peace accord, the FARC and the state agreed that the rebels would gather in 26 zones across the country. There, they would hand over their weapons, release child soldiers and began preparing their former combatants for integration into a society that some of them had never known.

Ituango–a geographically expansive municipality in Northern Antioquia, where the western Andes melt into the Caribbean–is one of the 26 zones where former guerrillas can now be found working as construction workers, waiters and farmers.

Lush fields of coca, the base ingredient for cocaine, are booming. Newly arrived armed groups are vying for the criminal enterprises left by the FARC.

During the conflict, Ituango was a FARC stronghold. It was the only municipality in Colombia that had its own FARC division, known as the FARC’s 18th Front, and the majority of people living in Ituango had family members who had joined the rebel force.

In 2016 the Colombian government, with UN oversight, built a small “town” in Ituango, called a “Territorial Training and Reincorporation Zone” or ECTR, to house 200 of the former rebels while they make their transition into civilian life. 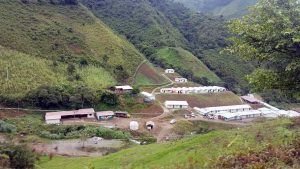 Like many of the other demobilization zones around the country, construction for Ituango’s ECTR is incomplete, and many of the former rebels have chosen to leave the zone and live with their families. Some have left to join armed criminal groups.

Under the iron sights of peace

For most, the transition into civilian life in Ituango for members of the FARC has been bumpy, and for some, deadly.

Last week, Dalaider Vasquez, a demobilized member of the FARC, was shot and killed in Ituango while walking in the urban center with some friends.

Vasquez was the third member of the FARC to be killed in Ituango since July, marking more murders of former-FARC members in Ituango than any other transitional zone to date.

In response to the killings, members of the FARC have begun expressing fears that they’re being targeted by powerful members of the political opposition.

According to a local source, about half of the FARC members in Ituango have abandoned the transitional zone. They feel more comfortable at home with their families. A small number of others have joined up with new armed criminal groups, who are offering up to $700 as a bonus to any former FARC member.

The FARC’s spokesman in Ituango, Gustavo Lopez, last week called on the government to provide “personal and psychological” measures to support “human rights, the right to life…work and mobility, and access to justice for all citizens currently engaged in reincorporation in Ituango.”

But according to the mayor of Ituango, the national government hasn’t provided local authorities with a list of FARC members they could use to improve protection measures for the former rebels. 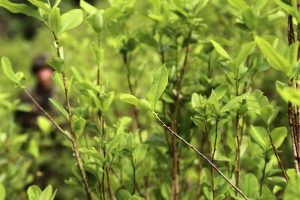 Coca cultivations like this one in Northern Antioquia are at the center of “post-conflict” instability, as farmers, government forces and armed groups clash over attempts to substitute the coca for alternative, legal crops. (Image credit: Fredy Builes)

Others in town are more skeptical that the FARC killings are directly related to public politics. Some shared rumors that the killings are being carried out by criminal groups trying to take control over old FARC drug trafficking regimes.

Still, the security situation is volatile for everyone in Ituango, even for non-members of the FARC, or those not engaged in the drug trade.

Maria Luisa, a founding member of Ituango’s Ideal Women Association, a women’s support network that was founded in the wake of the 1997 massacre, told Colombia Reports that human rights defenders in Ituango find themselves increasingly “confused” about their safety situation.

[Our security situation] certainly isn’t looking good, but we can’t really grasp what’s happening here in order to respond to it. We were accustomed to the social codes [of war]. But this supposed post-conflict has brought new codes and new actors. There is clear evidence of new armed groups threatening our work throughout the territory…And yet public authorities continue to deny the existence of those groups.

“There’s a fear that if we formally denounce these new armed groups the government will take away resources and investment in our initiatives,” Maria Luisa added.

“Everyone knows who the new groups are and nothing is being done,” confirmed Nicolas Bedoya, a journalist who’s been following peace implementation within Ituango for the last two years.

For Bedoya and local leaders like Maria Luisa, the FARC’s loss of armed control in the territory, paired with the government’s slow response to fill the gaps in authority, has resulted in a “very delicate” security situation.

“Every time I go to [one of Ituango’s rural villages],” Maria Luisa said, “they tell me there’s a different armed group in control. And I go there every two weeks.”

The same war dynamics persist as before, but with more uncertainty because we don’t know who the principal actors are.

Removing the veil of war

According to Maria Luisa, village elders in Ituango describe war as a veil, or a “little blanket.”

“War is a little blanket they put on us,” she said. “And all we can see is that little blanket for so many years. But when they take it off, we finally see what’s underneath it: we see who we really are.”

Since the veil of war has been lifted over Ituango, a number of challenges facing the small town–some more promising than others–have been exposed to the light.

The most visible challenge stands over the Cauca River at the towering height of two skyscrapers stacked on top of each other: a massive hydroelectric dam–the largest one in Colombia–which is set to flood Ituango’s river valley and begin operating in 2018. 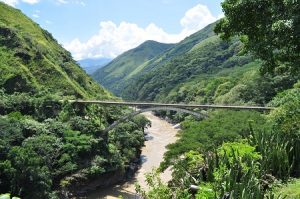 The Hidroituango dam will flood the Cauca River. Once the river floods, Ituango’s Pescadero Bridge, which connects Ituango with the road to Medellin, will be submerged.

The dam will provide 17 percent of Colombia’s power supply, and its construction has already given work to 11,000 people, most from outside the Ituango municipality.

The Hidroituango project has been controversial. Its construction has displaced hundreds of families, and the flooding of the river is expected to disrupt fishermen and small-time gold miners who have relied on the river for their livelihood for hundreds of years.

At the same time, many believe that the project has brought crucial development to Ituango. “Before the dam there was no paved road here,” said Bedoya. “It used to take up to 20 hours to get from Medellin to Ituango. Now it takes six.”

According to her, at the height of the armed conflict in Ituango, it was not uncommon for unidentified bodies to float down the Cauca River.

Locals who lived along the river would take the bodies and bury them near the riverbanks. The dead were never identified and their murders never officially recorded, making them part of the tens of thousands of people who “disappeared” during Colombia’s armed conflict.

Today, there’s a nationwide effort to uncover and identify the “disappeared.” The government is creating a special search team, and with the help of the FARC they hope to provide thousands of families information about the whereabouts of their lost loved ones.

“All of that information, all of those bodies, are going to disappear when they flood the river,” said Maria Luisa. “They need to find them first before moving forward with the dam.” 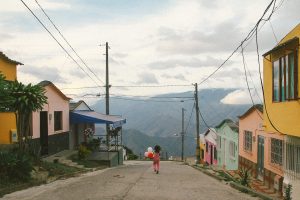 Meanwhile, there are further concerns about the dam construction workers and what they’ll do when the project is over.

One village member told Colombia Reports that EPM, the company building the dam, has effectively replaced the local municipal government as the main authority in the area. EPM provides employment, it moves and removes peoples’ homes, and it is the driving force of the local economy.

“Once that support is gone, there’s not going to be much left,” the community member said.

“Really it comes down to the fact that our institutions are not prepared for this new reality of the post-conflict,” said Maria Luisa.

After decades of war and rule by third parties with an almost permanent absence of the national government, Ituango is facing the post-conflict process like a kind of shock therapy.

Confidence in state institutions is very low,” said Bedoya. But even so, “there’s a lack of organizational structure here to guide the community, to take the peace process by the horns and see what it can accomplish.”

From Bedoya’s perspective, “a lot of people believe” that the post-conflict “could be worse than the actual time under FARC control.”

As a local leader, Maria Luisa is more confident. “We can strengthen our institutions. We have the capacity to do it. And when we do, that’s when there will be peace.”