In an open letter to Duque, the senators accused the National Intelligence Directorate (DNI) of illegal spying and plotting to smear “political targets” that oppose or criticize the government and the president’s controversial political patron, former President Alvaro Uribe.

The DNI rejected the senators accusations and stressed the agency was acting within the law.

According to the members of the Senate’s Peace Commission, multiple sources have told them that the DNI “has been preparing smear campaigns against us and a dozen other citizens who have been declared ‘political objectives’ of undercover operations.”

Aforementioned operations would include intelligence labor that has not been authorized by judicial orders… with the purpose, we have been warned, to prepare criminal investigations based on false pretenses, or in other words create “judicial false positives.”

The Senators said that they had been briefed about a March 30 meeting in a home in the Salitre neighborhood in Bogota in which DNI officials were discussing directives  from DNI chief Rodolfo Amaya, who reports directly to the president.

This type of persecution is common in despotic regimes in which opposition voices are silenced, not in democratic regimes.

Barreras, Cepeda and Sanguino said they had filed charges against the spy agency before the Prosecutor General’s Office, believing it is preparing a “strategy of systematic persecution” of critics of the government and Uribe.

We share the concern about certain related events that indicate a strategy of systematic persecution of opposition voices, critics of the government or the leader of the ruling party. We also refer to the harassment of social leaders and threats to the military who offer truth before the Special Jurisdiction for Peace.

Who the senators are

Senator Roy Barreras is the president of the Senate’s peace commission and one of the most powerful defendants of the country’s ongoing peace process and a close ally of former President Juan Manuel Santos.

Senator Ivan Cepeda is another member of the peace commission became one of Uribe’s main political enemies after publishing a book in which he exposed evidence of the Uribe family’s ties to a death squad.

Senator Antonio Sanguino is also a member of the peace commission who began as a radical student leader, but broke ties with armed groups in the 1990s to become one of Colombia’s most vociferous and renowned peace advocates.

In a press release, the DNI rejected the senators’ accusations and said that “all activity of this Directorate are carried out with transparency, traceability, [and] respect for human dignity and human rights.”

The DNI is ready to collaborate with the certification of the rigor of its actions that aim to “protect the rights and freedoms of citizens and residents in Colombia.”

Who the president’s spy chief is 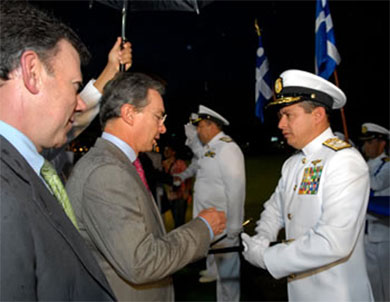 Uribe appointed Amaya as his chief military adviser when the controversial former president took office in 2002 and the DAS embarked on a ruthless political persecution campaign for which he is now in prison.

Duque appointed the admiral director of the spy agency that reports directly to the president’s office two days after taking office in August last year.

The senators’ accusations are similar to the ones made in 2008 by Senator Gustavo Petro who revealed the Uribe administration’s systematic political persecution of political adversaries and judicial officials investigating the Uribe family’s ties to paramilitary groups.

The scandal led to the dismantling of DNI predecessor DAS, and the incarceration of multiple top intelligence executives and Uribe aides.