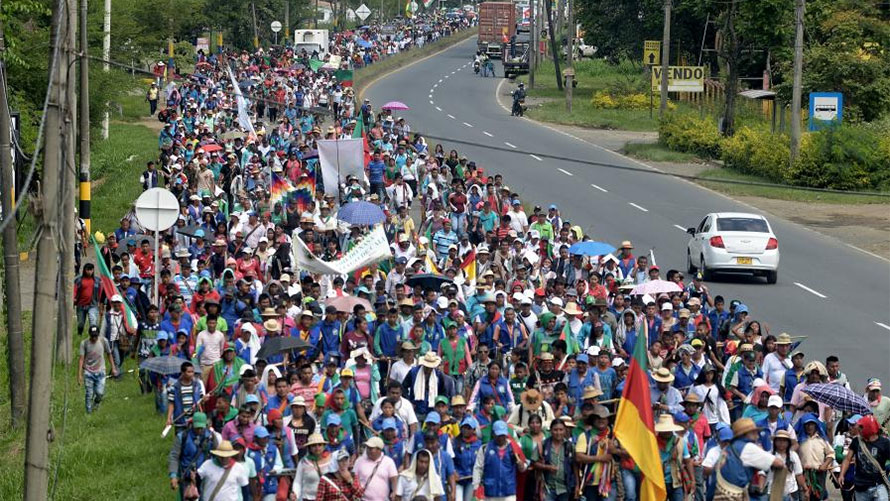 Indigenous in a third of Colombia marched on Wednesday to demand the government honors a peace agreement with FARC guerrillas, end the ongoing assassination of leaders and ends land-grabbing.

In total some 10,000 people marched throughout Colombia, according to newspaper El Pueblo.

The most massive march took place in Cali and drew some 5,000 indigenous from the southwestern Nariño, Cauca and Valle del Cauca provinces where post-FARC violence has been rampant. 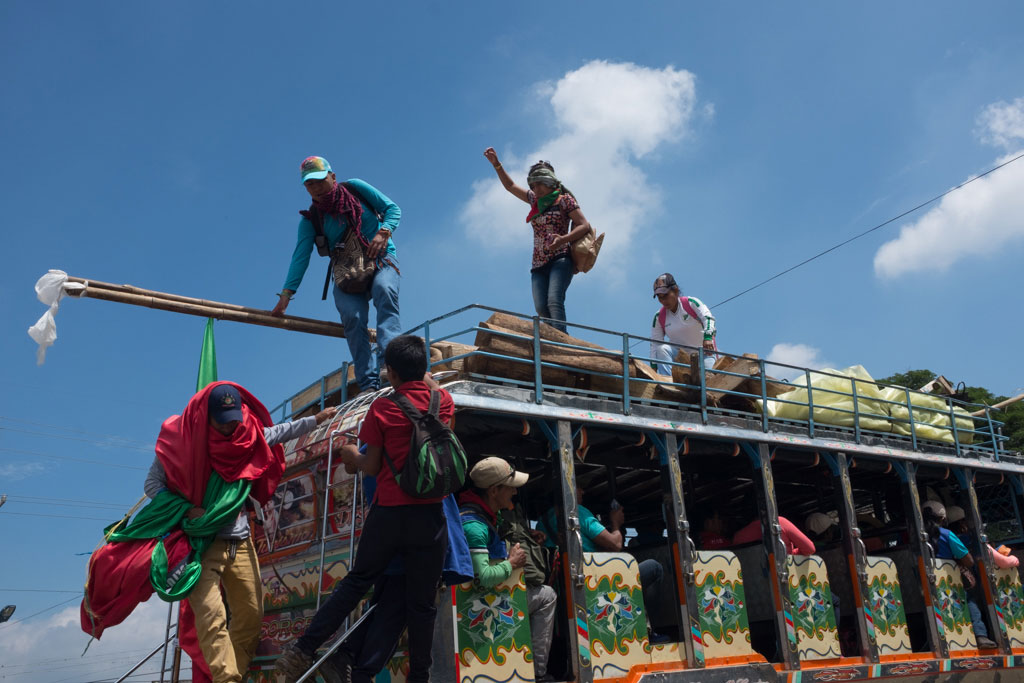 Tribes and people from across the violence-battered southwest of the country took to the nearby Jamundi and marched to Cali’s city center to demand action from the administration of President Juan Manuel Santos. 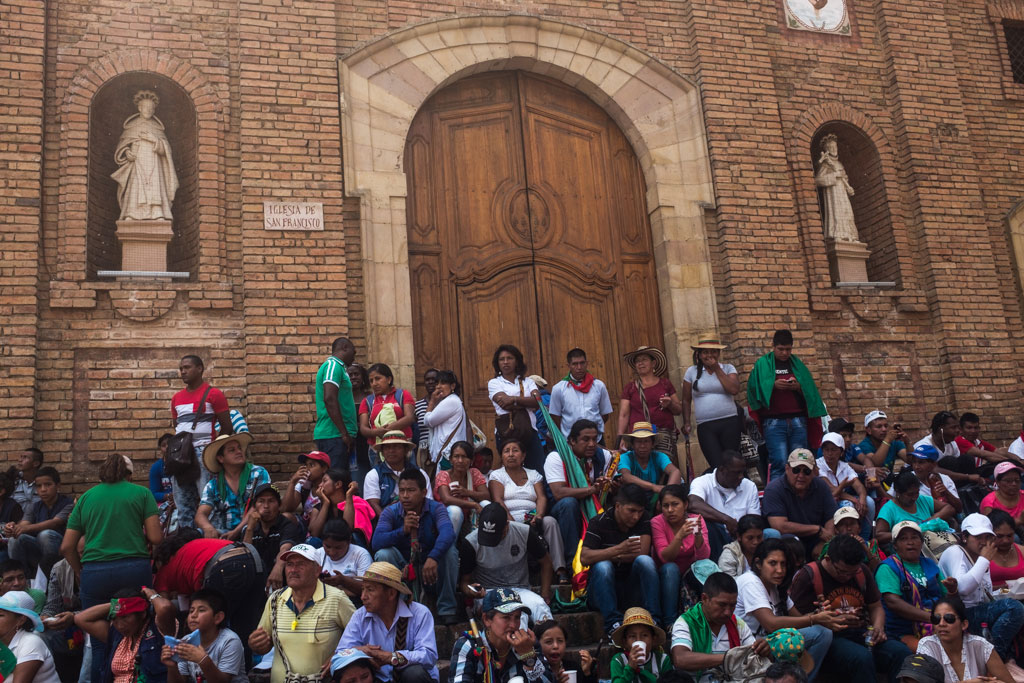 The indigenous had already withdrawn their confidence in the government, claiming it effectively “weakens and threatens the implementation of the Final Peace Deal” with Marxist FARC rebels reached in the Cuban capital of Havana they hoped would bring peace to their territories.

“They need to comply with the Havana agreements. The government needs to act to stop the assassinations of indigenous leaders.”

The indigenous accuse the national government in Bogota of breaching the peace deal to benefit large landowners instead, as promised, small farmers and ethnic minorities, many of whom have been displaced.

Thousands of companies, ranchers and large land owners subsequently acquired much of the land abandoned by the displaced, further amplifying the already extreme disparity in land ownership in the country.

Following the peace deal, this stolen or illegally acquired land must now be returned, much to the dislike of the ranchers and their representative in Congress, former President Alvaro Uribe.

The return of this land to its original owners in the case of the indigenous is not just a question of returning stolen property, but a matter of “liberating Mother Earth” from those they say illegally occupied land, included territory considered sacred for the indigenous. 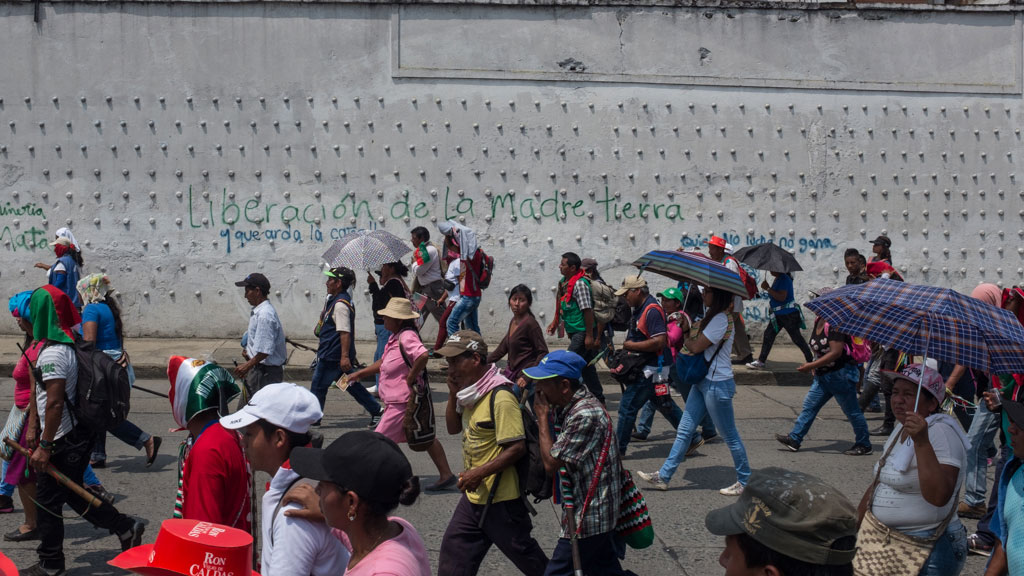 Inspector General Fernando Carrillo promised to “invite the magistrates of the Constitutional Court to realize a public meeting in the northern the Sierra Nevada de Santa Marta,” where the Arahuaco, Kogui, Wiwa y Kankuamo nations were protesting in defense of their territory.

Colombia’s indigenous have been disproportionately affected by the armed conflict, they have categorically opposed.

On several occasions, indigenous guards retained members of the military and the police on accusations of violating their territorial rights, drug trafficking and even the killing of their leaders.

Most recently, the indigenous turned against the government, which has denied the existence of the same paramilitary groups that are suspected of having killed most of the more than 30 social leaders who have been assassinated since peace with the FARC came into effect on December 1.

The marches took place without incident.