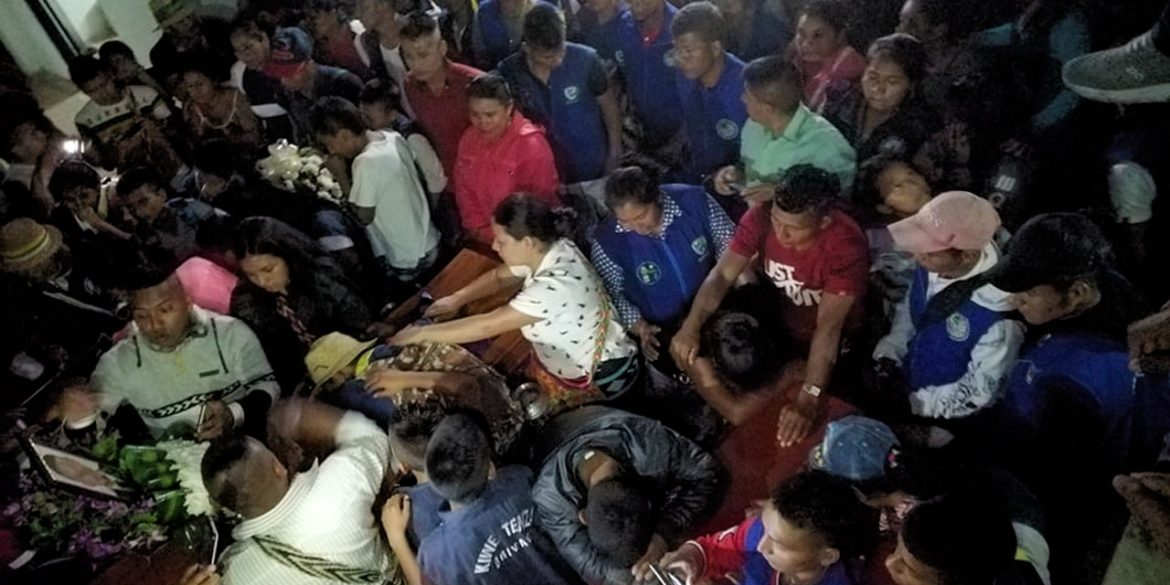 Members from a native Colombian community prepare the funeral of nine community members who were killed in an explosives attack. (Image: Oscar David Montero)
Guests

Colombia is inhabited by 102 Indigenous peoples. We are the victorious survivors of a genocide that has not yet ended; we are still in a “conquest” that does not end.

Our living memory is a long fabric of stories in which our process of struggle and resistance is still being written with blood and fire.

The long night of violence that generated the most atrocious genocide of humanity began in 1492. Since that year we have been treated as savages, barbarians and without mercy; all expressions of life in what was later called “the Americas” were exterminated.

This long-term violence is not over yet. Over time the practices and ways of annihilating us were perfected.

Colonization, independence, the Republic and now the discourse disguised as “bicentennial” are part of the endless “conquest” and of the homogenization of a mono-cultural expression of the Colombian nation, in spite of achieving that we really are multi-ethnic and pluricultural, a claim that only remains in the imperfect writing of the “Magna Carta.”

The genocide that we indigenous peoples are currently experiencing in Colombia is yet another expression of the racism and structural discrimination that is inherited from the colony, where killing Indians is not a crime, but a naturalized practice that justifies such acts; a practice that has been continuous and systematic towards the people of the earth, water, fire and air.

Not only is there a genocide against the human being, but against culture, unity, territory and autonomy. In other words, against the principles of the indigenous peoples.

Today, as yesterday, this does not cease in the indigenous’ country’s radiography.

The malnutrition and abandonment against the Wayuu People that has left more than 5,000 children dead, the extermination of more than 450 Kankuamos, the confinement against the Ette Enaka people in their own territory are cases of yesterday and today. On the Caribbean coast of Colombia there are still echoes of violence and genocide in people’s daily lives.

In the Eastern Plains the “guahibiadas,” the sport of killing Indians, and paternalism has led nomadic and semi-nomadic peoples to drug addiction, prostitution and destitution in provinces such as Arauca and Vichada. Sikuanis, Jiw, Amorua, Nukak, Betoy, Yamaleros and other indigenous peoples are dying in a dead-end alley.

In the Amazon, where rubber plantations were not able to put an end to the Murui and other peoples, today drug trafficking, deforestation, logging, border control and mercury contamination are leading to the extermination of the more than 60 indigenous peoples, the children and guardians of the jungle, located in the lungs of the world.

The Caribbean, the Eastern Plains and the Amazon are today the focus of savage capitalism. The deserts, jungles and plains are in the eye of the political project “Pact for Colombia, Pact for Equity” of the administration of President Ivan Duque.

Finally, we cannot leave aside what happens in the Andes, in the Pacific region and in central Colombia; it is believed to be circumstantial, but IT IS NOT.

The murders of more than 158 indigenous leaders in provinces such as Nariño, Cauca and Choco are nothing more than the crap times of the people who defend life, territory and self-government, of the people who, with their command cane in hand and with their dignity high, defend the rights of our peoples.

Even if we must die, as clearly expressed in the anthem of the Indigenous Guard, the canes will disarm the armed in times of peace and in times of conflict, protect the territory from those without harmony and confront a country where being indigenous and a leader means losing your life.

Guards, traditional doctors, governors and indigenous authorities are the target for those who think and believe that thinking differently in Colombia is synonymous with terrorism and must therefore be annihilated.

The Awá, Nasas and Emberas will surely continue to give their lives in the just struggle and vindication of their rights.

All these courses of violence have left countless alterations, interruptions and attempts to administer indigenous life and the vital network of the peoples.

Murders, confinements, threats, militarization, exploitation and exploration, pollution and other acts of violence have resulted in the extinction of 31 peoples and seriously threaten the physical and cultural extermination of 39 peoples, totaling 70 of the 102 indigenous peoples in Colombia.

This represents the loss of 70 ways of seeing, understanding and conceiving the world. It is an irreparable loss in the eyes of the social rule of law that not even the very laws, decrees, rulings and “differential” public policies have managed to stop the genocide.

All indigenous peoples in Colombia will continue to raise their voices to defend our lives and our territories.

We are being killed by everyone for taking care of our vital fabric, for the ancestral rights left to us by our spiritual fathers and mothers; they kill us with bullets, but they also kill us with the welfare policies of the State and with the indifference and oblivion of Colombian society itself as a whole, which finds it difficult to recognize that it carries in its genes the blood of those who today are murdered for defending Mother Earth.

May peace not cost our lives, let us give the opportunity for the seeds of life to re-establish the balance and harmony of humanity. Keep counting on us for peace, never for war.

May it not be too late for us to stay, so that truly with us and for us we can continue celebrating life at dusk and dawn.

Author Oscar Montero is a political scientist of the National University, lead investigator of the National Study of Historical Memory of the Indigenous Peoples of Colombia, and a native Colombian leader from Cauca.