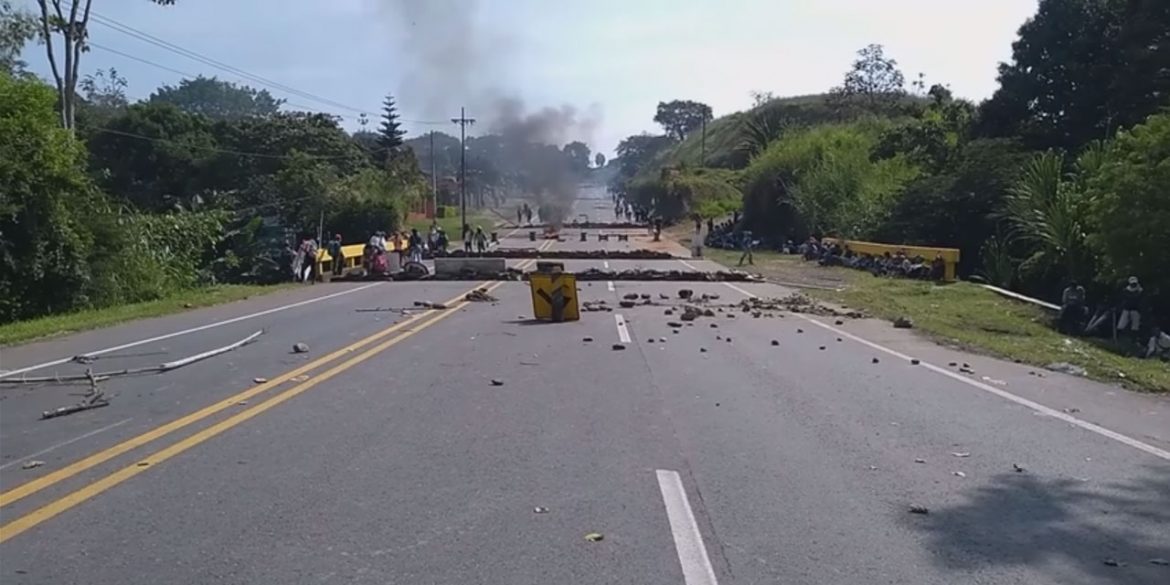 15,000 indigenous protesters have set up a road block on the highway connecting Colombia to Ecuador to protest government repression and Bogota‘s failure to engage in talks.

President Ivan Duque is also under fire for his hypocrisy – supporting social movements in Venezuela but violently repressing them in his own country.

The indigenous organizations demand access to land, fair prices for coffee and subsidies for coffee-growers. They also demand inclusion in the National Development Plan as well as the commencement of the Cauca Farmers Working Group.

Demonstrators demand the presence of President Ivan Duque as a show of commitment: he has so far failed to set a date to visit.

We have participated in innumerable meetings in Popayan and Bogota, and all we have got is non-compliance, evasion and refusal to ensure our rights.”

The Regional Indigenous Council of Cauca

The council who organized the protest called out the hypocrisy of the president, who has celebrated social movements in Venezuela while repressing those in his own country.

We do not understand why, for President Duque, social protest which takes place in Venezuela is legitimate while the social and peaceful protests of his fellow citizens are illegal and deserve the most violent and lethal repression of the military forces that he controls.”

The Regional indigenous council of Cauca

Army Commander General Jorge Herrera said that with the National Police they are ready to respond to any disturbance of public order and ensure the mobility of citizens. The local health authority has also put services on alert in case of a public order disturbance.

Duque has also sent two ministers to try to calm the protest, including Minister of the. Interior Nancy Gutierrez, who has assured that Duque’s arrival is imminent. The protesters, however, are not satisfied: the council have said they will speak with the delegation only in preparation for direct dialogue with the President.

The Minister’s promise does not respond to the petition of the communities congregated at the protest for the defence of life, land, democracy, justice and peace, given that the spokespeople of the national government do not have decisive power.”

The Regional indigenous council of Cauca

The government commission which was sent to the area was accompanied by representatives of United Nations, the human rights office, and the Cauca government. The Minister for Agriculture announced governments plans for investment in agriculture in the area according to the National Development Plan – which will have a specific chapter on inclusion of indigenous groups, and formalization of land ownership.

This government has designed a development which plans to invest more than 227 billion pesos in rural zones within the next four years. Investment in Cauca are around 24 billion pesos ($7.5 million).”