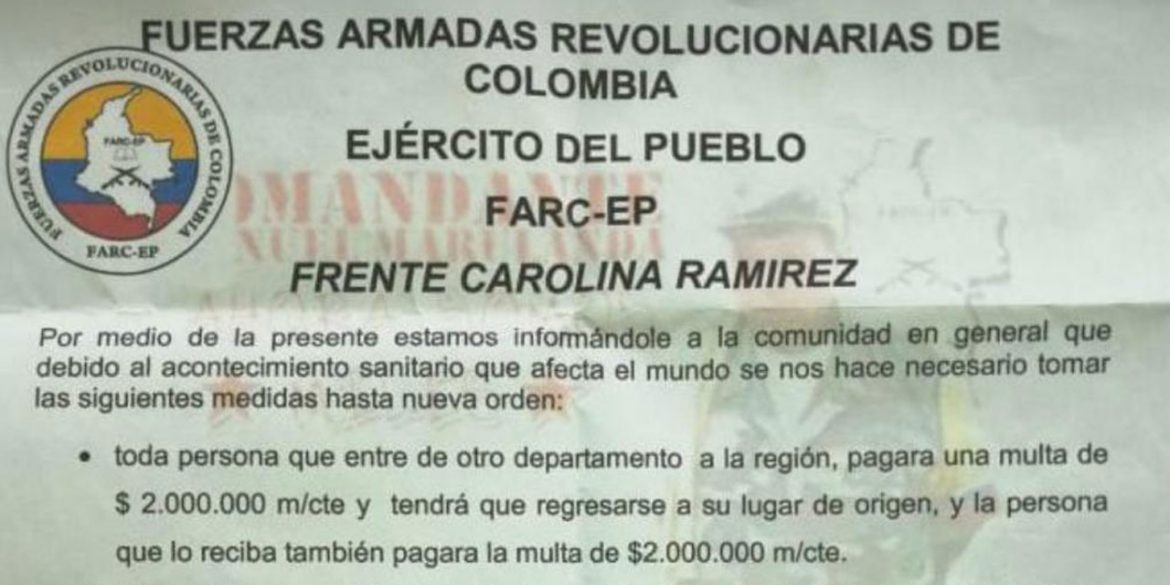 In a report, the human rights organization said it had received reports of illegal armed groups imposing their own measures in 11 of Colombia’s 32 provinces.

The groups mentioned were guerrilla group ELN, paramilitary group AGC, dissidents of the demobilized FARC guerrilla group, narco-guerrillas EPL and “The Mafia,” a drug trafficking organization in the south of the country.

According to HRW, the groups mainly used pamphlets and Whatsapp to lay down the rules in areas under their control, often threatening people violating these rules with death.

Previous reports indicated that illegal armed groups have used the pandemic to expand their territorial control. HRW said to have evidence they were also using the health emergency to more strictly impose their social control.

In some areas, the illegal armed groups have maintained strict lockdowns also after the government began relaxing the lockdown it called on March 25 and are even disallowing sick people to go to the hospital.

Humanitarian workers said that armed groups in parts of Nariño, Arauca, Putumayo, and Guaviare have not allowed people, including those who are sick, to leave their homes at all during curfews.

Colombia Reports received reports from this website that in the northeastern Arauca province, ELN guerrillas were even patrolling roads to enforce a government-endorsed lockdown in the early weeks of the pandemic.

HRW said it had documented nine killings connected to illegal armed groups’ COVID-19 measures in Cauca, Putumayo and Nariño in the southwest of the country.

Until the FARC’s demobilization in 2017, the southern and eastern provinces mentioned by the HRW were largely controlled by this group, but have fallen under the brutal rule of other illegal armed groups following state failures to assume control in the abandoned FARC territories.