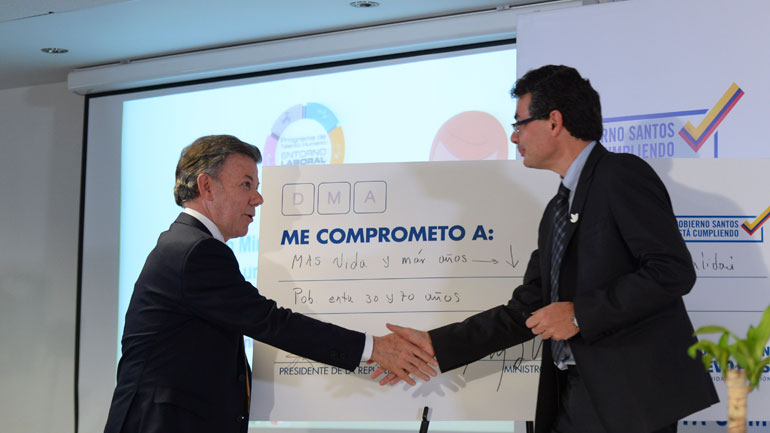 Santos did so while, joined by Health Minister Alejandro Gaviria, presenting advances made in the sector over the past year.

Santos’ presentation was preceded on the same day by the second protests this month of health workers, tens of thousands of whom have been without pay for months while hundreds of hospitals are at the brink of bankruptcy.

“The [health care] system we received was in intensive care. It had some structural errors that made it non-viable. It had been robbed by paramilitaries in the regions for a long time,” said Santos.

According to Radio Caracol, between 2002 and 2010 when Santos’ current rival former President Alvaro Uribe was in office, this amounted to $185 million.

However, hospitals and hospital workers who were protesting on Wednesday to demand $4 billion to save the health care system claimed that more than $4.5 billion was embezzled and misappropriated by health care intermediaries.

Health workers protest to demand $4B for Colombia’s suffering hospitals

“Not only do we seek the resources to pay the debts for public and private hospitals in the country, but a structural reform to Colombia’s health system is required,” a spokesman from the Association of Social Enterprises ACESA in Medellin told media.

Santos responded with a clear “No. The big health reform has already been done.”

The Santos administration carried out a health care reform in 2013, but Congress would not touch the health intermediaries called EPSs that are commonly accused of having caused the financial crisis,