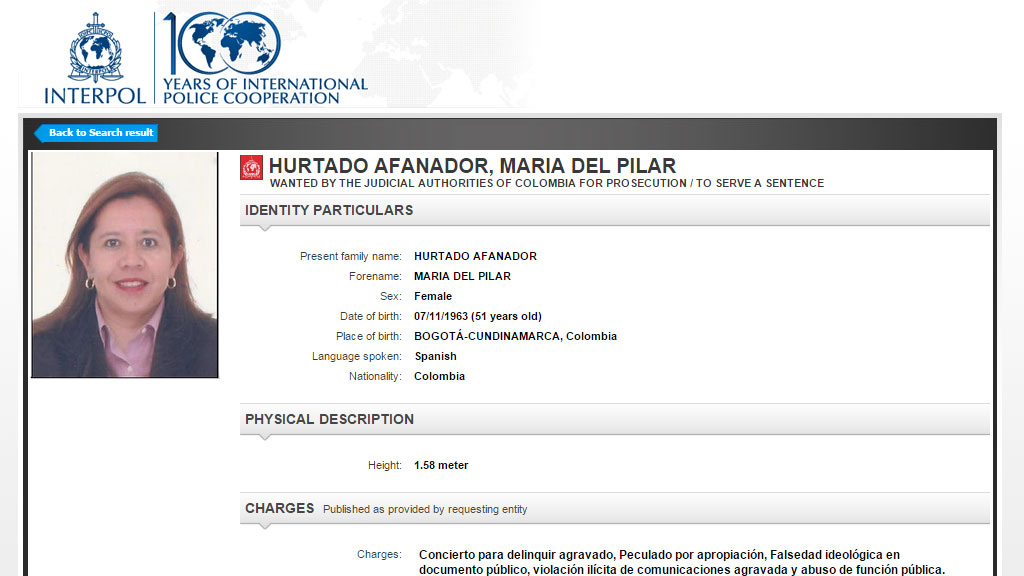 The former director of Colombia’s now-defunct spy agency DAS turned herself in early Saturday morning at her country’s embassy in Panama where she spent years trying to get political asylum.

Former DAS director Maria del Pilar Hurtado had been in Panama since November 2010.

She had fled her country to avoid facing a series of criminal charges related to her alleged role in illegal spying practices carried out by her office.

However, after more than four years of being a fugitive and trying to obtain protective status as a political refugee, her situation began looking extremely bleak on Friday when Interpol issued a red notice and the Panamanian government issued a deportation order.

At 3AM on Saturday morning, Hurtado surrendered herself to authorities at the Colombian embassy in Panama City.

She was flown to Bogota to be incarcerated while standing trial for a series of alleged crimes related to abuse of power and the illegal use of wiretapping equipment, among others.

During the two presidential terms of Alvaro Uribe, the DAS had been spying on Supreme Court magistrates, politicians, journalists, and both national and international human rights groups.

Hurtado has been named as one of the masterminds between the political persecution practices and allegedly delivered the illegally obtained intelligence directly to the Presidential Palace.

While lower-ranked former DAS officials have indicated that the illegally obtained information on anyone who “interrupted the governance of Uribe” was meant for the president, both Moreno and Hurtado have so far been able to shield the former president from being directly implicated.

Reports on illegal wiretaps were meant to inform Uribe: Witness

Nevertheless, Congress has been investigating the former President’s role in the illegal wiretapping since early 2013.

With the arrest of Hurtado, two of the three DAS directors appointed by Uribe have been incarcerated.

Hurtado was appointed deputy director of the DAS in 2006 was subsequently made director after the resignation of her predecessor, inheriting the illegal spying unit that had been set up by one of her predecessors, also jailed former DAS director Jorge Noguera.

The DAS was Colombia’s controversial and feared secret police that was dismantled in 2011 following a wide range of scandals that has seen two former directors sent to prison and one on the run from justice until this morning.

Apart from the illegal spying practices, the agency had become embroiled in scandals involving political killings, drug trafficking and far-stretching ties with paramilitary organization AUC which had been able to obtain top positions within the agency.