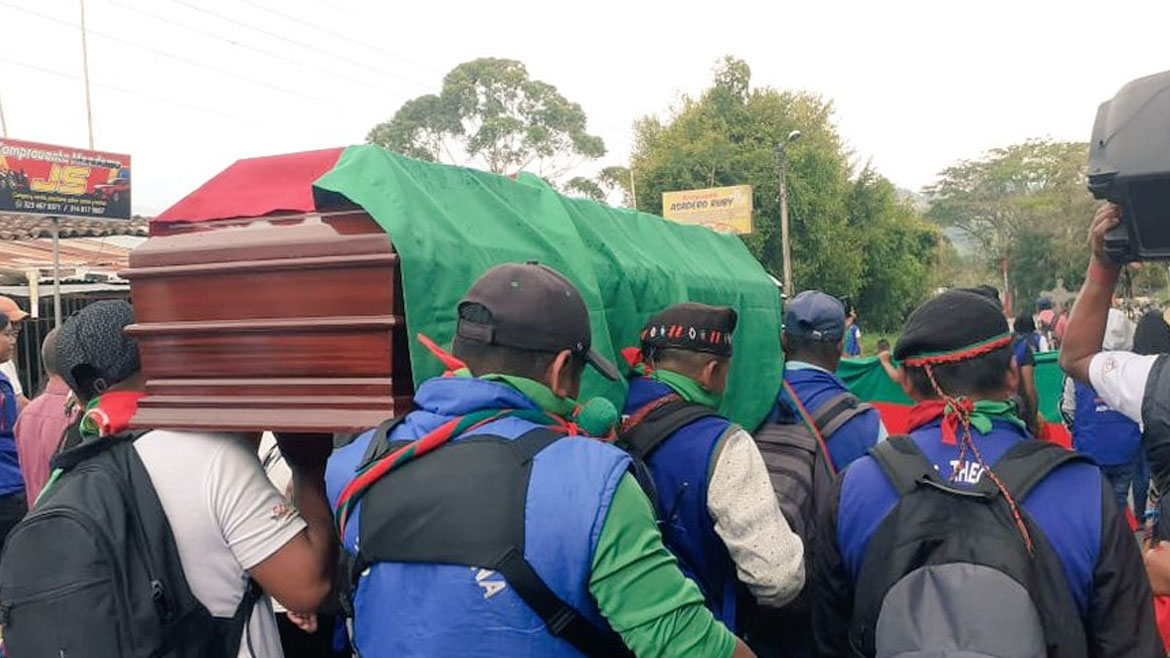 Colombia’s State fails to provide any kind of security in the southwestern Cauca province where ethnic minorities have been under siege by illegal armed groups, drug traffickers and the military for decades.

This week alone, illegal armed groups committed three massacres and assassinated one policeman in the province where the history of the local Nasa people goes back more than 10,000 years.

Combat between two rival guerrilla groups forced more than 200 people to flee their homes in the rural part of Balboa, a municipality in the south of Cauca, on Wednesday.

Cauca is the home of Vice-President-elect Francia Marquez, who survived an assassination attempt while meeting with community leaders in Suarez in 2019.

At least 246 social leaders have been assassinated and more than 170 people were killed in at least 48 massacres since President Ivan Duque took office in August 2018.

The violence disproportionately affects the indigenous Nasa people who refuse to surrender their fertile territories in northern Cauca to illegal armed groups and regional elites alike.

Who is killing the locals?

The prime suspect of killings indigenous in northern Cauca is the CCO, a federation of guerrilla groups that formed after the 2017 demobilization of now-defunct guerrilla group FARC that used to control the area.

Following the demobilization of the FARC, the Nasa people stepped up efforts to rid their territories of illicit crops left by the demobilized guerrillas.

At the same time, however, the guerrillas began planting coca in areas with easy access to the Pacific port city Buenaventura in particular, including inside indigenous territories and the jungles north of Cauca.

In the Pacific region of Cauca, another FARC dissident group, “Segunda Marquetalia,” has been violently trying to expel the CCO in order to assume control over the coca that is grown there apparently with the help of local ELN guerrillas.

Pamphlets of the AGC that have appeared in El Tambo and Argelia indicates that this paramilitary organization is trying to expel all guerrilla groups from the Pacific region, which is also rich in gold.

To further complicate matters, Medellin organized crime syndicate “La Oficina de Envigado” has been promoting the cultivation of marijuana in the north of Cauca for consumption in Colombia’s second largest city.

On top of the conflicts with the guerrillas and the narcos, the Nasa people have been involved in a decades-long dispute over sugar plantation in the indigenous ancestral lands in northern Cauca.

In a 2021 meeting with the Truth Commission,

Tensions between indigenous and plantation owners in southwest Colombia

Where did the security forces go?

The National Army has been carrying out attacks against the guerrillas in the west and north of Cauca, which has caused tensions with the locals.

The Regional Indigenous Council of Cauca (CRIC) said Wednesday that both the army and the guerrillas were using the inhabitants of an indigenous reserve in northern Cauca as a human shield.

Today, August 2, in the town center of the Las Delicias reserve, there were reports of combat between the Jaime Martinez mobile column and the National Army. The community members had to take refuge from the crossfire in their homes. These armed groups are using the civilian population as a human shield… At 2:30 in the afternoon, the combat moved to La Chapa hill, where the Indigenous Guard had to evacuate an educational center, protecting the students from the armed confrontation.

In the Pacific region, communities have been expelling counternarcotics units since February.

According to these locals, the army is forcibly eradicating coca while the government promised the farmers substitute crops that would allow them to sustain themselves.

We are asking ourselves different questions that will help us to solve what is behind this. One of them is why the public forces do not take control of known illegal economic routes.

Mounting evidence indicates that corrupt elements within the National Army are colluding with the very drug traffickers that are causing the security crisis in Cauca.

In February, the National Army was forced to sack a general after he admitted to working together with a local drug trafficking gang in the marijuana-growing region.

The general was has yet to be arrested.

The scandal involving the general, the army’s failure to effectively combat drug trafficking and the constant attacks on the civilian population have deteriorated locals’  confidence in the State, according to Valeria Mosquera of human rights organization Ruta Pacifica de Mujeres.

We are in the midst of a sense of impunity that sends a very negative message to the population. There is a public message being sent to society about the reduced capacity of the justice system to solve the clarification of the facts of persistence. A second phenomenon is the lack of confidence in the institutions.

According to indigenous leader Edwin Mauricio Capaz, “there are interests in maintaining the region unstable, powers that need to invalidate local organizational processes by the indigenous and the black community, powers that use the violence to maintain their local hegemony.”

According to Capaz, this may change on Monday if President-elect Gustavo Petro kicks off his first day as president with a trip to Cauca.