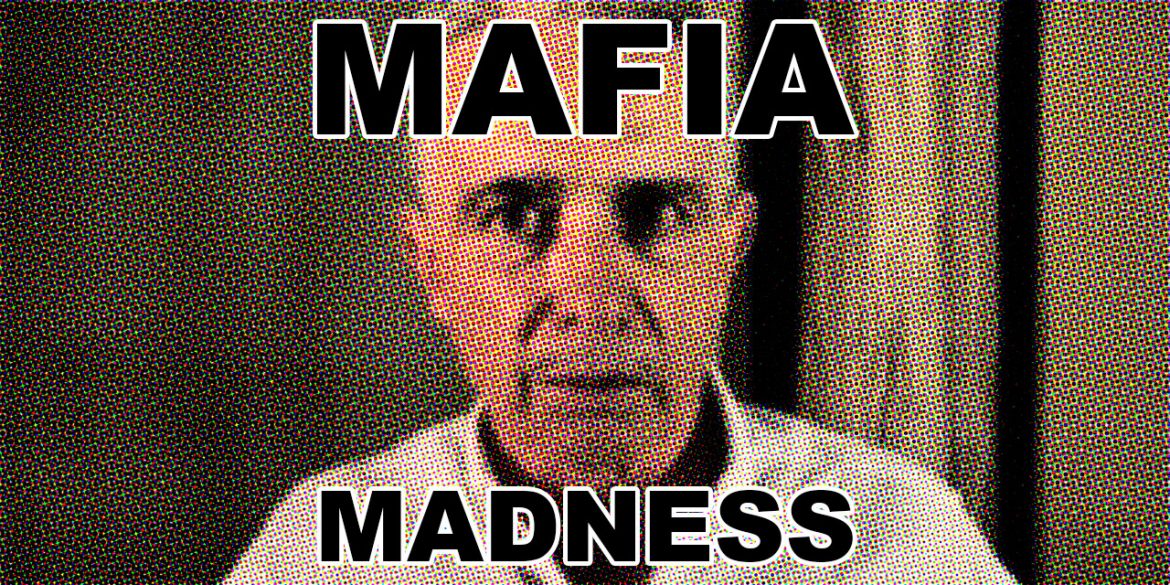 The false claim that drug traffickers serving time in the US could help solve the 1995 assassination of former presidential candidate Alvaro Gomez backfired, however, and has his entire inner circle in a legal fix.

Uribe’s attempted hoax, did not just provide evidence of his alleged fraud and bribery practices, but lured President Ivan Duque and Prosecutor General Francisco Barbosa in an alleged criminal conspiracy.

According to newspaper La Nueva Prensa, Barbosa planned to use the narcos’ fabricated testimonies to pin the assassination on former President Ernesto Samper on next month, but saw this fall apart when the FARC claimed responsibility for the murder last week. 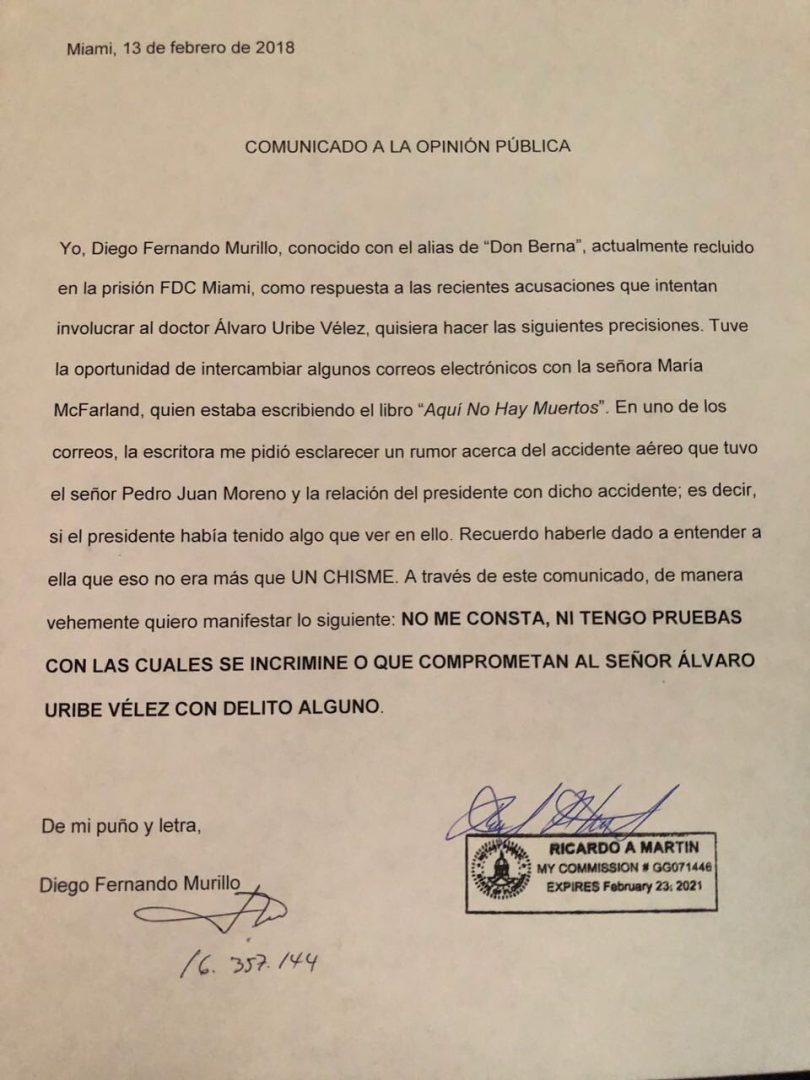 “Tomorrow I will go to the prosecution to continue to contribute to the clarification of the crime of Alvaro Gómez, overcome the infamy against my brother and recent issues against me,” Uribe Tweeted on February 13, 2018.

One of those issues was “There Are No Dead Here,” a book in which extradited Medellin crime lord Diego Fernando Murillo, a.k.a. “Don Berna,” reiterated that the former president had ordered the 2006 assassination of his former chief of staff, Pedro Juan Moreno.

As promised, Uribe and Cadena went to the Prosecutor General’s Office with a letter of Berna saying the assassination claim was “nothing but A RUMOR.”

Four days later, the Supreme Court opened a fraud and bribery investigation against the former president, who had been inventing one hoax after another with the help of the self-proclaimed “gangstattorney,” who is now detained.

Congratulations to former President Alvaro Uribe Velez, a hero, former recipient of the Presidential Medal of Freedom and an ally of our Country in the fight against CASTRO-CHAVISMO! I will always stand with our Colombian friends! 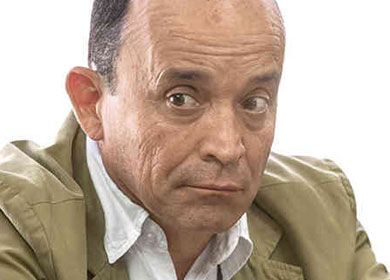 According to Uribe, he first learned of Cadena in 2014. The mafia lawyer told Colombia’s current Defense Minister, Carlos Holmes Trujillo, the bogus campaign finance claim at the time, according to party insiders.

The mafia lawyer and the former president told the Supreme Court that Uribe’s criminal cousin Mario arranged their first meeting in February 2017.

According to the mafia lawyer, he sought a meeting with Uribe because Quintero “knew relevant facts in relation to the murder of Gomez.”

The former president said he took the initiative because Cadena’s clients would have information “not just about my brother Santiago, but about the murder of Dr. Alvaro Gomez, which moves me.”

“I need an attorney to help me verify that information because the attorneys [Jaime] Granados and [Jaime] Lombana don’t have those contacts,” Uribe allegedly told the mafia lawyer.

At the time, a Medellin court was hearing witnesses about Uribe’s brother alleged leadership of the brutal paramilitary group “The 12 Apostles” in the early 1990’s. 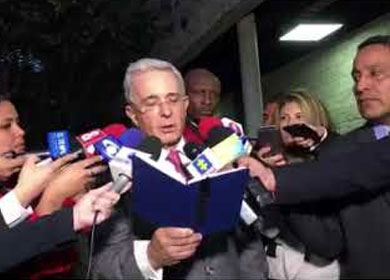 Uribe’s fake visit to the prosecution

Half a year after Uribe and Cadena met, the former president and the mafia lawyer went to the prosecution for the first time, they just never entered the building, Cadena told the court.

Uribe believed the Gomez hoax required media attention rather than a judicial investigation, so he held a press conference, the mafia lawyer who had become the former president’s fixer testified.

Uribe went to the Prosecutor General’s Office, but said that since things coincided with the scandal of the justice system, this issue was not going to get very far, so he decided to make a press release; and in relation to the Alvaro Gomez case he went and made a statement in the company of Diego Cadena who he curiously warned that he didn’t want any inaccuracy in the information he was giving. 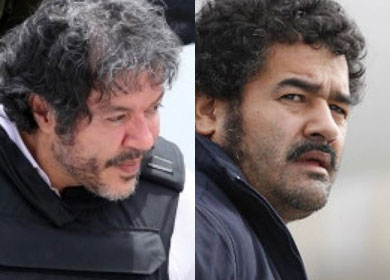 In front of the prosecution building, Uribe told press he had “three testimonies of inmates who are imprisoned in the United States. One of them, who was extradited by my government, claims he can help clarify the assassination of Mr. Alvaro Gomez, another who wants to help clarify the $12 million drug traffickers would have given to aides of the current government, and another, who wants to clarify the innocence of my brother” Uribe told the press.

As if that wasn’t enough, the former president repeated a claim that Rastrojo donated $12 million to President Juan Manuel Santos’ 2010 campaign the prosecution had discarded as nonsense. Four days later, the Supreme Court filed fraud and bribery charges against Uribe.

The only client of Cadena who was extradited by Uribe, “Gordo Lindo,” didn’t know anything about Gomez, but did discredit a key witness against the president’s brother, former police captain Juan Carlos Meneses, in a letter in October that year.

Varela told me: “Gordo’, since I know you’re going to Cordoba, tell your neighbors, the Castaños, not to go around saying I’m a guerrilla. I have done the paramilitaries’ best runs and to show you what I have, here in Buga we have this police officer who is one of our troops and does what we tell him to do. He was on duty in Yarumal (Antioquia) and if Castaño needs to get rid of that son of a bitch Uribe, the officer does what I tell him to do and he can say that Uribe’s brother was the one who sent him to do social cleansing.

The trial that never went anywhere

Gordolindo was released from prison in January 2018 and deported to Colombia in April. Two months later, his mother died in a car accident and the former narco never testified against the former president’s brother.

The former mafia lawyer who had now become the former president’s fixer screwed up and the first witness, ‘Victor,” flipped and admitted he had been bribed.

Uribe family attorney Jaime Granados was simultaneously doing two trials that were both going down the drain. On October 8, a day after the prosecution announced perjury charges against seven of his witnesses in the case against the former president’s brother, the attorney asked a recess.

“Zeus,” a former army major who had worked for the Norte del Valle Cartel, confirmed a week later that Cadena had bribed him to falsely claim the former president’s brother was the victim of a conspiracy.

The prosecution asked the court to convict Uribe’s brother when the trial resumed on January 13 and the trial was suspended again a week later.

Twenty-five years after the former president’s brother was first accused of being involved in The 12 Apostles, the status of the trial is unclear.

What is clear is that Uribe’s request to reduce the sentence of the Norte del Valle capos never went anywhere. Neither Quintero nor Rastrojo were ever deported and never appeared in court.