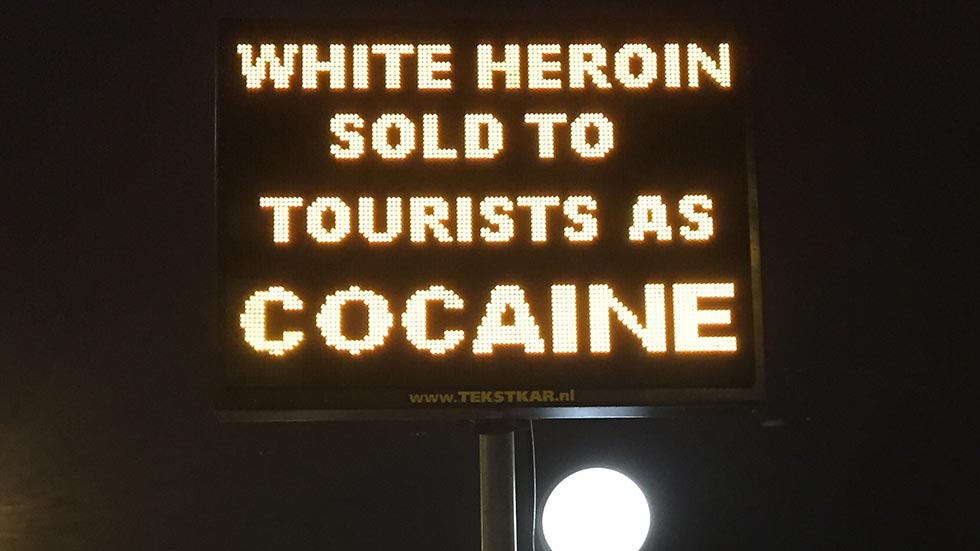 Drug tourism is a common phenomenon for anyone in the Netherlands and Colombia. Drugs are easily available in both countries. The difference is that in Colombia the tourists are yet to come.

A Dutchman in Medellin, I hear complaints about coked-up Israelis already, while Colombia is currently possibly at only a fraction of its tourism potential. The country received 2 million visitors last year.

With the “Has Armed Conflict” label removed, Colombia could reach tourism levels exceeding those of the Netherlands and can just as easily overtake my native country as the world’s top drug tourism destination.

Amsterdam, the capital of the Netherlands alone, received 7 million tourists last year. According to a local juvenile crime expert, between 500,000 and two million were drug tourists.

While Amsterdam is mostly famous for its marijuana, it’s the pills and the cocaine that attract the tourists. When you go to a festival or club, you don’t smoke a Dutchie, you snort coke or pop E’s.

And this is where the trouble begins, because unlike marijuana, selling pills or any other kind of drugs is illegal. Consequently, these rackets are run by criminal organizations.

These organizations obtain their dealers from the marginalized sectors of society where, even in the Netherlands, plenty of kids lack opportunity.

The Dutch street dealers aggressively sell drugs to tourists, the profits are then laundered through a chain of, for example, ice cream shops, and enters the legal economy and the hands of the big boys.

Meanwhile, legal enterprises gladly making money off the drug tourism industry are the hostels and the airlines.

“Maybe half of the cheap flights to Amsterdam are really drug flights and at least one third of the thousands of hotel beds will be shelter for drug tourists. It’s not the underworld corrupting the normal world, but the normal world of hotels, festivals and airliners profiting of an often well-organized criminality. With the city as a market manager.”

Erik Heijjdelberg, Organization for the Protection and Reintegration of Youth

The street dealers of the Dutch crime groups, exactly like the “chiclets vendors” at Medellin’s Parque Lleras, push their drugs, openly marketing their goods to potential tourists.

“coke, xtc, hashish,” is more common to hear for an Amsterdam commuter than “goedemorgen” and often considered rather intimidating.

I wouldn’t worry about the hippies

A lot of people in Colombia talk bad about the drug tourists, the easy target, especially on flip-flops. But my main concern is the pushers, the ones causing most trouble and violence in Amsterdam.

If Colombia’s microtraffickers are going to operate a drug tourism industry the size of Amsterdam, things are likely to get uglier than they are in my former capital.

Now, who do you think they will target when tourism really picks up and Colombia begins receiving hundreds of thousands of drug tourists annually with a budget dedicated to drugs and partying?

At that point, cities like Bogota, Medellin and Cali will be annually be dealing with hundreds of thousands if not millions of drug tourists, neatly flown in and out by United Airlines and sheltered by AirBnB hosts or hostels.

The occasional overdose aside, it won’t be the druggies who will be the problem.

At that point tourist consumption of cocaine will become a much bigger market than locals’ consumption and an interesting alternative to exporting cocaine.  It could become a game-changer for Colombia’s drug traffickers.

No lessons from Amsterdam

Amsterdam has been dealing with drug tourism since the 1960s and has not been successful in curtailing it, mainly because the private sector and crime groups share the same interests.

Colombia’s cities have possibly been worse at public security management and will find themselves with their backs against the wall once a mature drug tourism industry has evolved and begins “protecting” its customers and business.

Tourist areas could become the battleground for turf wars now held near the “plazas” for local youth, while local club and hostel owners could increasingly become victim of extortion.

While reading up on drug tourism in my own country, I found that the Dutch have yet to find an answer, and that the situation is getting worse. Colombia could actually prepare for the phenomenon we all know is going to get bigger and bigger.

But rather than just bitching about the gringos, we need to start figuring out how the hell we are going to deal with the sellers and the possible increase in violent crime.