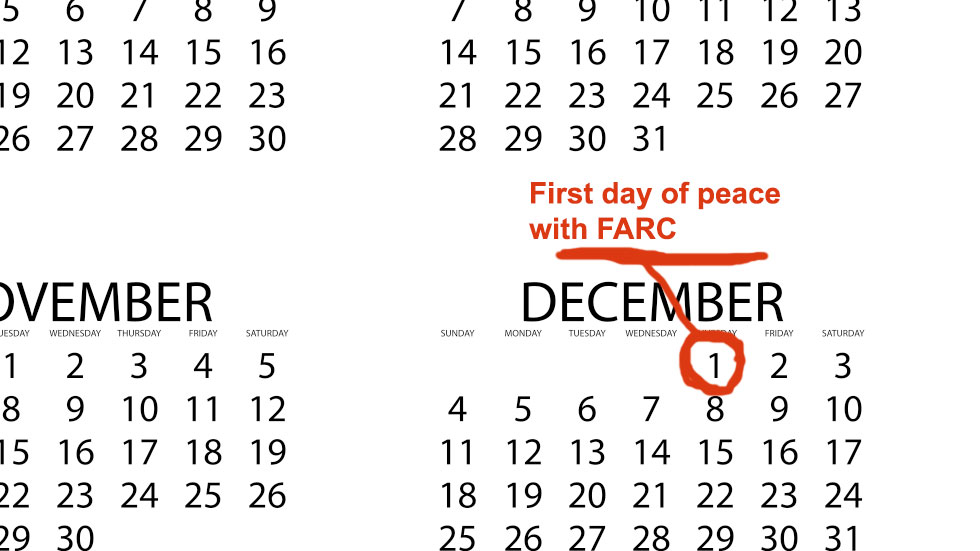 In their peace agreement, the government and the former guerrillas agreed to a strict timeline that should secure the FARC’s full demobilization and disarmament before April 30 next year.

On Thursday, instructions will emerge for the FARC to move from their pre-grouping zones to the respective demobilization areas.

According to Colombian President Juan Manuel Santos, in the next five days the transfer to demobilization zones will begin.

First the FARC’s tactical units will present a list of fighters and weapons assigned to be demobilized in each zone.

As in the original plan, militia members who live with their families rather than in a FARC camp, but have weapons, will demobilize on D-Day plus 7, or next Thursday.

All the former FARC fighters will be in these areas by December 30.

President Santos added that the disarmament process will develop over “D-Day plus 30, plus 60, plus 90, up to 150” at which point the UN will be in possession of all FARC weapons.

The government plans to have 30% of FARC weapons surrendered by January 30, 60% a month later, and full disarmament by the end of March.

The arms will be stored in UN containers, before being gradually moved to undisclosed locations to prevent an unsafe buildup of weaponry.

These weapons will be used to construct monuments commemorating the peace.

At this point the FARC will have “ceased to exist” as a military organization.

By the new year all FARC fighters should be demobilized and the government will have the information necessary to begin disposing of explosive caches and mines.

By D-Day plus 50, January 20, the government seeks to carry out operations to detonate the explosive caches.

By D-Day plus 150, April 30, the former guerrillas will either have received amnesty or been charged with war crimes.