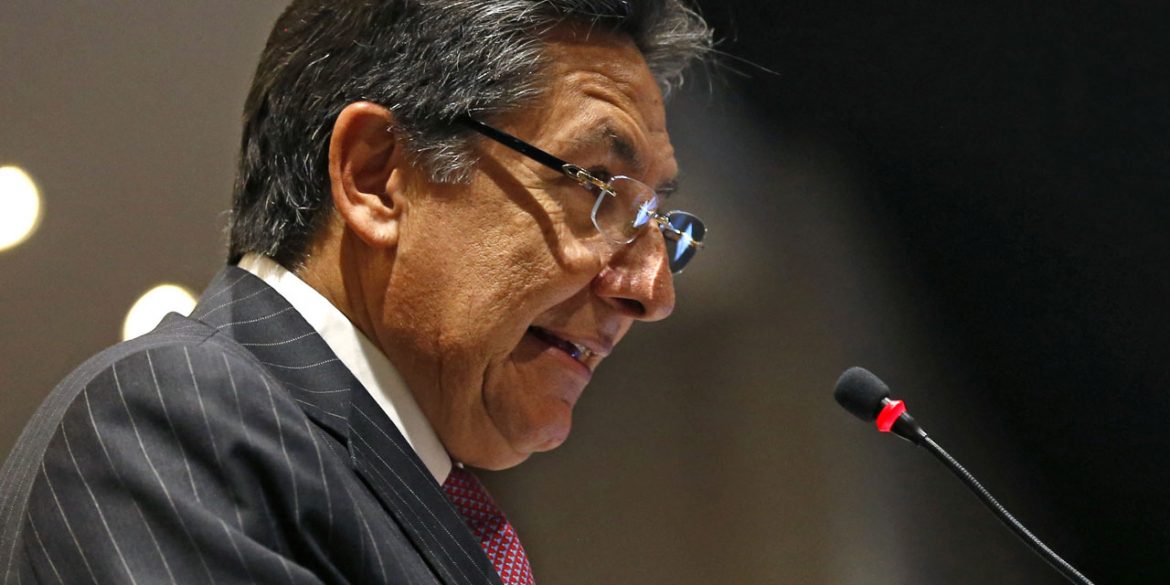 Facing down senators demanding his resignation over his ties to the Odebrecht bribery scandal, Colombia’s chief prosecutor told Congress on Tuesday he was the victim of a leftist conspiracy.

According to Prosecutor General Nestor Humberto Martinez, leading opposition Senator Gustavo Petro and the director of the National Infrastructure Agency (ANI), Luis Fernando Andrade, have been conspiring to implicate him.

Martinez has been directly linked to the Odebrecht corruption scandal by audios secretly recorded by Jorge Enrique Pizano, the former auditor of Corficolombiana, a partner in the Ruta del Sol II road construction project, who died on 8 November.

The audios proved that Martinez that he knew about Odebrecht’s bribery practices in 2015 when he was the judicial adviser to Colombia’s richest man Luis Carlos Sarmiento, whose Grupo Aval partnered with Odebrecht in the construction project.

Senators wanted to know why Martinez did not investigate the corruption practices after the Supreme Court appointed him Prosecutor General in 2016.

Martinez volunteered to attend the senate debate and turned his fire on left-wing senator Jorge Robledo who has demanded his resignation, saying Robledo was the “king of sophistry and lies,” and claiming that Pizano was an “eternal friend”.

“What did I do to cause this lynching?” the chief prosecutor rhetorically asked the senate.

The audios revealed by the Odebrecht whistle-blower could have given Martinez a clue as they made it evident he knew about the bribery without taking any action.

Now you’re in it, and the only idiot who is going to get in trouble is you, asshole, hahaha.

Martinez’ office did not investigate the corruption until after December of 2016 when the US Justice Department revealed the millions of dollars of bribes that Odebrecht had paid to secure contracts in Colombia and other countries in Latin America and Africa.

“I am an expert in looking for cases of corruption” Martinez told the senate, and drew attention to elements of the audios that supported his claim, such as an excerpt in which he told Pizano “If you know of anything, sound the alarms.”

In his last testimony to the Colombian authorities, on 13 August, Pizano had told the country’s industry watchdog that he hoped that Martinez would be called to trial for corruption. Pizano said that he feared being persecuted by Martinez’s organisation in the same way as former ANI director Luis Fernando Andrade, who was imprisoned by Martinez on a technicality.

While accepting that “Mr. Andrade did not get his hands dirty with money… that does not exempt him from the responsibilities he assumed”, and that the ANI had to take out a private tender to comply under conditions of fair competition, a requisite that he claimed was not met by the ANI under Andrade.

The ANI was tasked with awarding road construction concessions through private-public partnerships. Having been appointed from the private sector by former president Juan Manuel Santos to clean up the notorious National Concessions Institute, Andrade created the National Infrastructure Agency.

The Financial Times reports that “in 2014, P3 Bulletin, a specialist journal, voted ANI the best public-private partnership agency in the Americas. Under Mr Andrade, it awarded more than 30 contracts without any legal complaint.”

Martinez added Tuesday that all of the Rosales neighborhood (in northern Bogota) knows that Andrade and Gustavo Petro were meeting to conspire against him, and that other conspirators had reached the international press, “because it is said that in Colombia witnesses of corruption cases are murdered when the evidence suggests something else.”

The initial diagnosis that Pizano died from a heart attack is being questioned after Pizano’s son died after drinking from a bottle of cyanide-laced water that had been on his dead father’s desk. The United States ambassador Kevin Whitaker has asked for the protection of Andrade and his family.

Critics have demanded that the Prosecutor General’s Office that Martinez leads step aside from the investigation into Pizano’s death due to the evident conflict of interest.

The bottle of cyanide-laced water has been declared inadmissible in court having been contaminated, and the Pizano’s computers have also reportedly been taken into the Office’s possession.

While Martinez claims that he has recused himself from the investigation and claimed that he attended the Senate hearing as a private citizen, the Prosecutor General’s Office spent hours tweeting in Martinez’ defense while the chief prosecutor was grilled in the Senate.

The debate is set to continue on Tuesday.