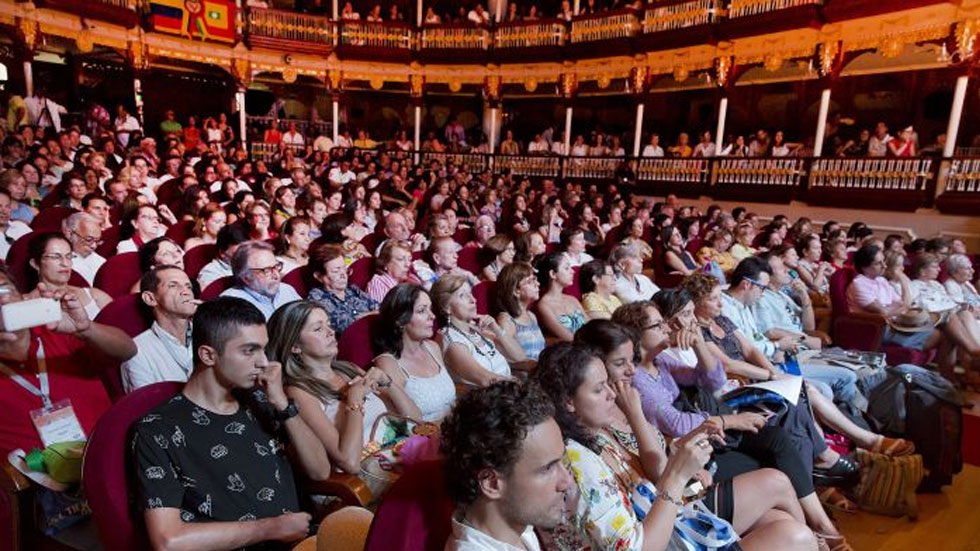 Colombia’s Caribbean city of Cartagena plays host to the Hay Festival of Literature and Arts which will see some of the greatest contemporary minds come together from Thursday till Sunday.

The event, now in its 12th year aims to promote various forms of art, thinking and the great political, scientific and philosophical debates, including gastronomy, cinema and music.

The festival which will include approximately 100 events this year is now one of the annual highlights of Colombia’s cultural calendar, part of a year-round series of Hay Festival events that bring readers and writers together to share stories and ideas in sustainable events around the world.

While the main spectacle takes place in Cartagena, there will also be events held in the cities of Riohacha and Medellin as the festival is expected to attract an audience of 50,000 people.

Hay Festival Cartagena is a great melting pot of ideas and a celebration of great literature and the power of sharing conversations. It is very exiting to be in Colombia where they are making their own history, and re-imagining a future with audacity and hope.”

Hay Festival will present a wide range of authors and journalists from around the world whom will cover a range of current political affairs and tackle issues such as oppression and freedom of speech in the 21st century.

The line-up will include writers such as Hisham Matar, the Libyan-British author of “The Country of Men”, shortlisted for the 2006 Man Booker Prize, Jonathon Shaw a New York tatoo artist and cult author as well as Philippe Sands, Professor of Law at University College London who will discuss the tragedy of Syria and other crimes against humanity.

Spain is represented by writers Fernando Aramburu and Luisge Martin while Swiss novelist Jöel Dicker, author of “The Truth About the Harry Quebert Affair” will discuss thriller as fiction genre, and what went into his writing to sell more than two million copies in  32 languages.

Some Colombia’s most respected essayists, novelists and columnists will be represented in Enrique Serrano, Alfredo Molano, Santiago Gamboa, Ricardo Silva and Juan Gabriel Vasquez, among others.

A vibrant music and spoken word program includes salsa star Yuri Buenaventura, who will deliver the opening concert, British pianist James Rhodes who will talk about his autobiography “Instrumental”, before delivering a one-off concert.

The three-day Hay festival will conclude with a concert of traditional Colombian “bambuco” music in honor of the Mono Nuñez Festival that takes place every June in the capital of Tolima, Ibague.

For poetry enthusiasts, the festival will also feature its renowned poetry gala with citations of wide ranging material from poets around the world.

Conversations at the festival will also tackle the hard issues of today, relevant to the contemporary Colombian context.

Director of BBC Mundo, Hernando Alvarez will chair a discussion on journalism in a post-truth age.

2017 marks the 100th anniversary of the Russian Revolution and the Hay Festival will duly oblige to commemorate the event that led to the downfall of the imperial Romonov dynasty which changed the course of world history forever.

British historian and award-winning author of the historical novels “Young Stalin” and “The Romanovs: 1631-1918” will give a series of lectures to mark the anniversary of the Revolution.

The brain, analysed from a scientific perspective will be one of the central themes of Hay.

Ignacio Morgado, Director of the Institute of Neuroscience at the Autonomous University of Barcelona will debate all things neuroscience while Irish neuroscientist Suzanne O’Sullivan will discuss her 2016 Wellcome Book Prize winning book “It’s All in Your Head.”

The visual arts have a prominent place, as Argentine cartoonist Liniers joins his Chilean colleague Alberto Montt in performing an illustrated stand-up alongside caricaturists Matador and Vladdo.

Bonil from Ecuador, Rayma Suprani from Venezuela and Ann Telnaes from the United States, talk about political caricature, while the great Peruvian painter Fernando de Szyslo will discuss his memoirs.

Cartagena deemed a city of ‘heart, soul, and style’

Founded around a kitchen table in Wales in 1987, Hay Festival continues to grow from strength to strength with 2017 marking its 30th anniversary.

A full program of events for the highlight of Colombia’s cultural calendar can be consulted on the festival website and the new application will be available for both Android and iOS devices.

This years’ events will culminate with a return to its country of origin with the Hay-on-Wye leg of the festival taking place from from 25 May to 4 June.