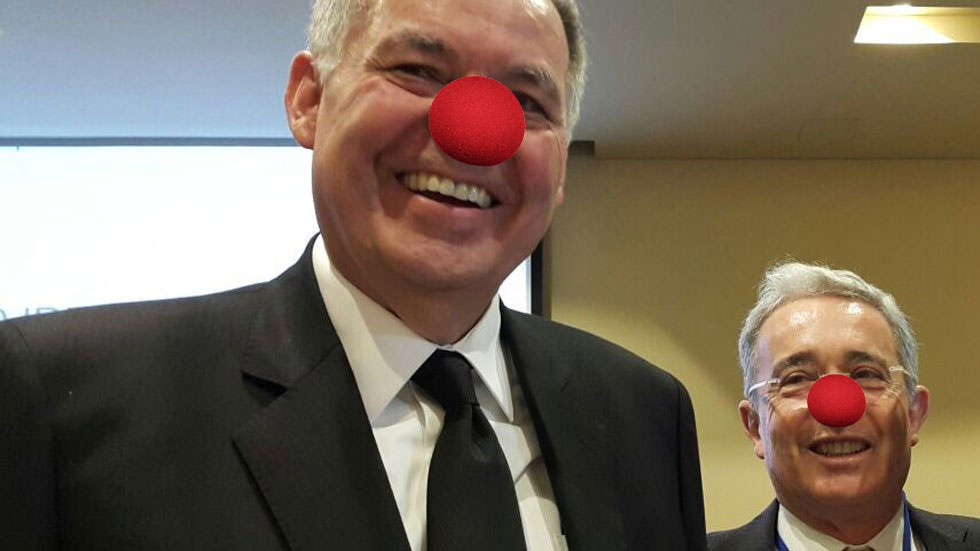 Colombia’s April Fool’s march against corruption or against peace?

While April 1 at best seems an awkward date to have been chosen by members of Colombia’s conservative opposition for a march on the scourge of corruption, but, this is as people continually say, the “Locombia” of today.

You may recall that the Odebrecht scandal brought down a government in Brazil, has former Peruvian president Alejandro Toledo on the run and threatens to completely undermine what little logic and reason which may be left in Venezuela.

In Colombia, not so.

Former President Alvaro Uribe and his band of merry pranksters, including the former Inspector General Alejandro Ordoñez, have been mobilizing their party faithful along the lines of anti-corruption ticket for 2018’s already complicated presidential elections.

However, the playing field for the April Fool’s march seems to have shifted from a rejection of corruption (to-wit Messrs. Uribe and Ordoñez will also have to respond) to that of a repudiation for the Congress-FARC guerrilla approved peace accord of late 2016.

And of course, possessing opinions and a rejection of the hastily revised agreement propelled into law to supposedly shield it from the presidential elections, is “de rigeur” in Colombia. A healthy debate is a welcome breath of fresh air in the nation’s halitosis ridden democracy.

However, the levels of polarization in Colombia as shown by the victorious No vote in last September’s referendum in what should have been a cake-walk for President Juan Manuel Santos, proves that the arguments for and against the peace accord are agitations rather than credible debates which we can learn from.

This past week a letter from the Democratic Center to the US Government – first denied, then confirmed – requesting a complete freeze on all aid to Colombia seemed to corroborate allegations that the conservatively aligned party’s desire is to continue to undermine the country’s already delicate peace process.

Should the turnout for the April 1 march exceed expectations, the numbers will substantiate fears that President Santos, with the Nobel Peace Prize still warming his mantelpiece, has failed to appropriately socialize and inform the Colombian people of the realities that the country faces after a conflict of roughly 52 years with the FARC.

The post conflict was never going to be easy and required a seasoned tillerman which, sadly, Santos is not. So, now it’s down to the Colombian people to see this through.

Having spoken in person to high-ranking FARC guerrillas in their camp this past week in the southern department of Guaviare, I was convinced that if the rank and file of the rebel continued to follow the orders of the Secretariat and their commanders, then there is a commitment to peace, despite the concerns voiced by both sides on thorny issues.

Surely, even with the unnecessary frictions created by Government in their failure to have the camps ready and liveable on time on one side, and by the guerrillas not handing their weapons in to UN observers on the prescribed dates on the other, and then the disagreements over the never ending saga of how to effectively execute a Colombian version of transitional justice which both benefits the country and punishes those guilty of the most heinous crimes, a sustainable peace is what the country is aiming for?

And yet, now-Senator Uribe seems set to oppose the deal at any cost. He will appeal to emotions with false claims that former combatants for the FARC will receive more than twice the minimum wage (roughly US$625) per month for nothing, he will state that there will be no justice for war crimes committed by the rebels and that the country is plummeting towards an inevitable situation of “Castro-Chavismo” such as the one suffering neighboring Venezuela.

Those who have taken the time to inform themselves on the peace agreement and share the facts, will not be marching on April 1. Each “Uribista” pretense can be negated, and with ease, but Santos only has himself to blame for not working harder on this.

In the meantime, the FARC await their overdue homes and hopeful futures, paramilitary groups are massing across the nation in the power vacuum left behind. The number of assassinations of social leaders and campaigners climbs steadily skywards and as was widely reported, the cultivation of coca and production of cocaine has increased massively.

Troubling times in Colombia. One fears that a march against the peace accords may not be a solution to the country’s woes.

Oh, and if you hit the streets in Medellin, YouTube sensation Popeye, Pablo Escobar’s former top assassin, will be out there too. Grab a selfie with him for posterity…or not.