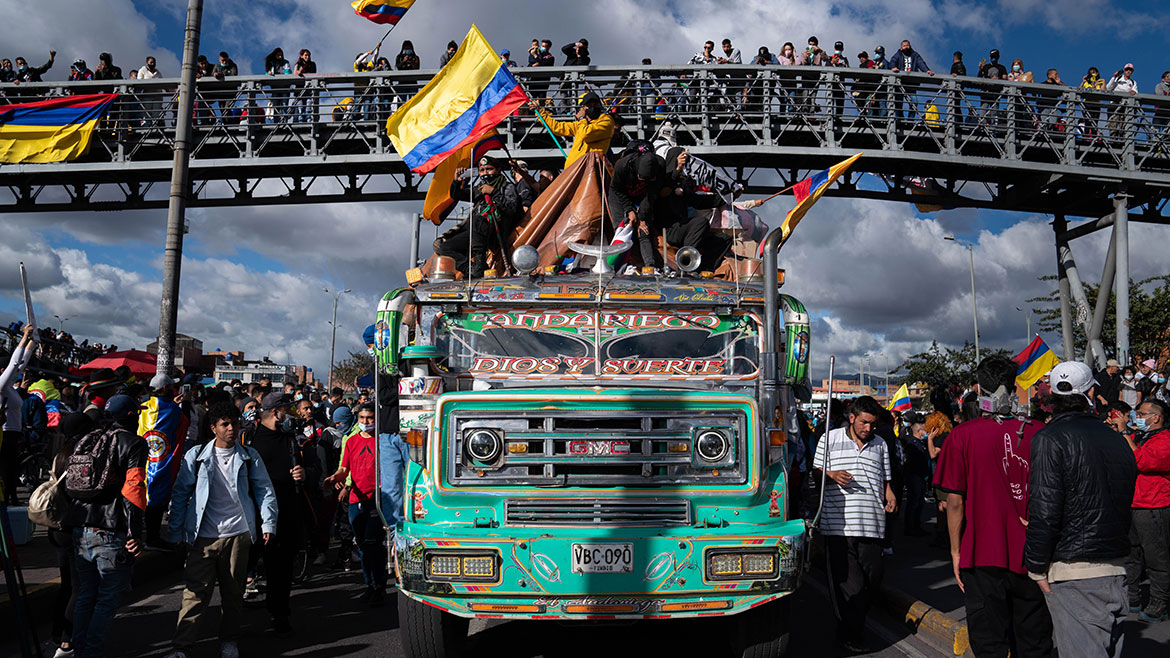 While Colombia’s prosecution is trying to get alleged leaders of anti-government protests in jail, pro-government extremists are sending them death threats.

The prosecution has mainly been targeting alleged “Frontline” protesters that have been trying to protect themselves and other protesters against police brutality.

Prosecutors in the capital Bogota and in cities like Medellin and Cali have called alleged members of these groups to court on all kinds of charges, including terrorism, torture and extortion.

Judges have refused to jail many of these protesters, claiming the protesters are being prosecuted without evidence of any criminal behavior.

In Medellin, students and teachers from university EAFIT have received death threats from multiple far-right groups for taking part in the protests.

The Prosecutor General’s Office has apparently been reluctant to investigate violence that killed at least 80 protesters since late April, according to think tank Indepaz.

Human rights organizations believe that more than 300 people have been “disappeared,” Amnesty International said in a report on Friday.

Prosecutor General Francisco Barbosa, a personal friend of President Ivan Duque, on Sunday announced the arrest of five alleged members of Frontline groups in Medellin, claiming they were involved in violence in the Antioquia province.

A Bogota judge agreed to uphold the home detention of alleged frontline protesters in the capital who were accused of torture over the detention of an undercover policeman in May.

A judge in the northern city of Barranquilla ordered to release six of 11 alleged frontline protesters who had been arrested on vandalism charges on Saturday.

In an interview with government-loyal magazine Semana, Barbosa said young people who formed the frontline groups “are a bunch of thugs that are doing harm to the country.”

According to human rights organizations, thousands of people have been detained on bogus charges since the protests kicked off on April 28.

Illegal armed groups and far-right extremists have been sending death threats to student protesters and leaders of the April 28 national strike that triggered the protests alike.

The director of teachers union FECODE, Nelson Alarcon, told media that death threats that triggered the unionist to flee Colombia in June continued after his return last week.

Students and teachers from the EAFIT university in Medellin have received death threats since mid-June, claiming they were “indoctrinating subversives with leftist ideologues.”

Far-right group “Aguilas Negras,” which is believed to have ties to the security forces, said the protesters were a “military objective” because they were communists and “terrorism aides.”