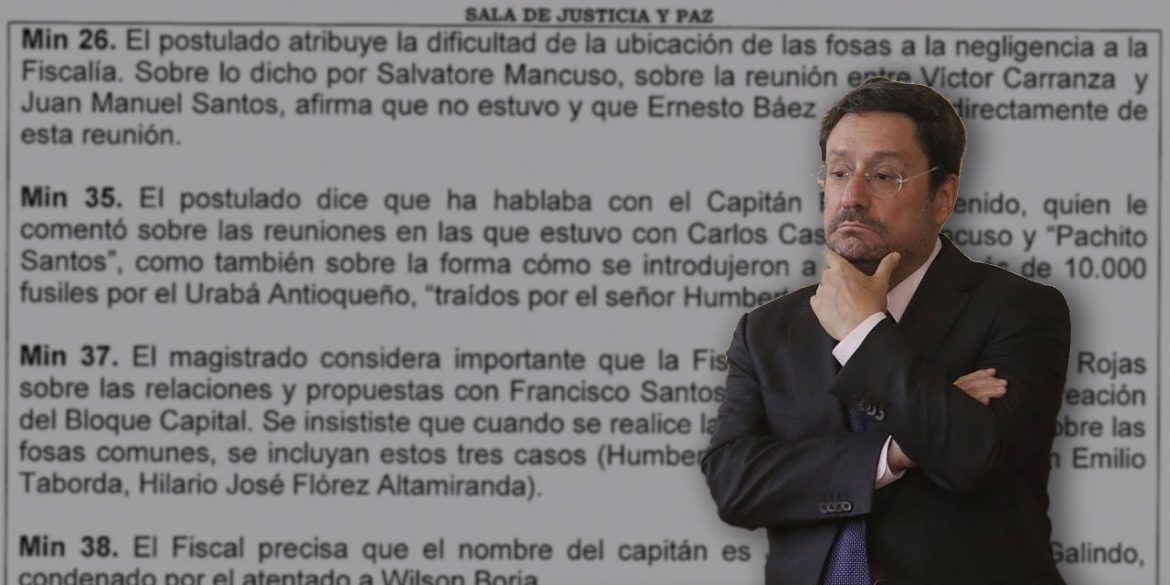 The legal problems of Colombia’s ambassador to Washington DC got a lot worse after the US decided to deport former paramilitary leader Salvatore Mancuso to the South American country.

Ambassador Francisco Santos asked the prosecution to open a criminal investigation against him in April 2007 after Mancuso told prosecutors that the then-vice-president had proposed to form a paramilitary death squad in the capital on two occasions in 1997 when the dynasty politician was editor-in-chief of Colombia’s largest newspaper, El Tiempo.

Multiple former paramilitary commanders confirmed that late AUC founder Carlos Castaño in 2000 ordered the formation of the “Bloque Capital” at the request of Santos, whose newspaper began promoting the AUC after Santos allegedly invited Mancuso to El Tiempo’s headquarters in Bogota to promote the paramilitaries’ in a meeting with the newspapers’ journalists and columnists.

Santos praised the model that we presented to him, of how we functioned in Córdoba, and he told us… that one day the self-defense groups would be able to replicate that model in Bogota, since it was seen with concern in the capital’s circles that the guerrillas were advancing as they were after the Colombian capital.

The prosecution initially objected to investigate Santos because he was vice-president at the time, but was overruled by court.

Former President Alvaro Uribe extradited Mancuso and 13 other AUC chief to the United States in May 2008, which would have solved Santos’ growing problem had it not been for the fact that Mancuso and others continued cooperating with Colombia’s so-called Justice and Peace tribunal.

Paramilitary commander “Monoleche” told a Medellin court that Colombia’s ambassador had become so friendly with the paramilitaries he met “Jorge 40” in on of the homes of the Gnecco crime family in Valledupar while in town to promote his anti-kidnapping foundation “Pais Libre” in 1998 and on multiple other occasions.

Also this court ordered to investigate Santos and his role in the formation of the Bloque Capital he was asked to command by Castaño, according to Mancuso.

The court ordered the prosecution to stop procrastinating and include Santos’s alleged complicity in and investigation into war crimes committed by the Bogota paramilitary group in 2016.

While sinking deeper and deeper into legal trouble, President Ivan Duque sent Santos to Bogota to become ambassador, which would allow him to keep an eye on the release of former AUC commanders posing a legal threat to the ambassador and Uribe.

The dynasty politician, a notorious blabbermouth, ruined it with the State Department after an article came out in which he was criticizing the trump administration earlier this year.

Duque initially said he would accept Santos’ resignation, but changed his mind after which the Foreign Ministry began bungling Mancuso’s extradition, not mentioning the ambassador’s conflict of interest.

Santos had apparently lost goodwill in Washington, which initially indicated it would deport Mancuso to Italy as Foreign Minister Claudia Blum never sent an extradition request.

The State Department changed its mind, however, and said it would deport the demobilized paramilitary chief to Colombia last week, claiming that sending Mancuso to Italy was “not in our interest.”