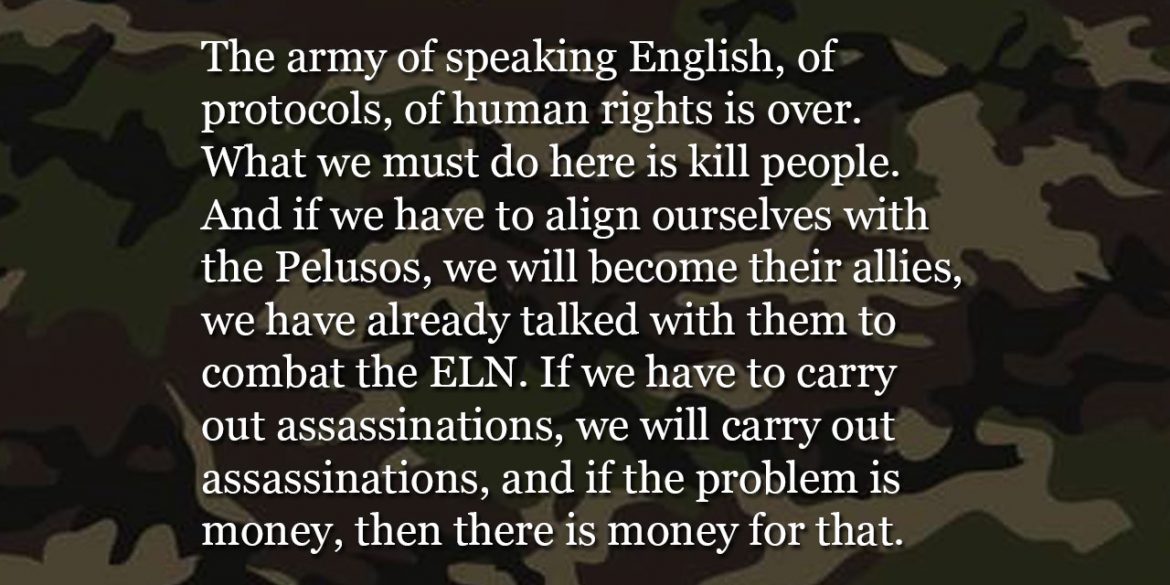 The commander of Colombia’s 2nd army division is in trouble after weekly Semana revealed alleged ties to guerrilla group EPL, and corruption and extortion claims.

Second Division commander General Mauricio Moreno additionally denied knowing about criminal activity allegedly carried out under his watch when he was leading the Titan Task Force in the western Choco province.

Moreno took over the command of the 2nd Division in July last year months after reported chaos in the division with jurisdiction in historically violent regions like Magdalena Medio, Catatumbo and southern Bolivar.

But Moreno doesn’t seem to do much better than his predecessor, General Jaime Carvajal. In fact, the area under Moreno’s control has seen violence skyrocket, particularly along the Venezuelan border.

To make matters worse, the general has admitted to helping controversial National Army commander Nicasio Martinez in an alleged witch hunt against whistleblowers who told press about possible human rights violations and corruption, according to the Inspector General’s Office.

Semana released evidence indicating that Moreno did not just host a key meeting in the alleged witch hunt, but was present at another, possibly more controversial meeting on January 26 at the 30th Brigade in the city of Cucuta.

In this meeting, the weekly reported, Vulcano Task Force commander General Diego Villegas said he had talked to EPL guerrillas, a.k.a. Los Pelusos, about joining forces.

The army of speaking English, of protocols, of human rights is over. What we must do here is produce kills. And if we have to align ourselves with the Pelusos, we will become their allies, we have already talked with them to combat the ELN. If we have to carry out assassinations, we will to carry out assassinations, and if the problem is money, then there is money for that.

Three months after this meeting, Villegas was forced to apologize to a community in Catatumbo after one of his units was caught red-handed trying to bury a demobilized FARC guerrilla they had assassinated.

Semana reported that both the Prosecutor General’s Office and the Inspector General’s Office have at least one testimony of one of Moreno’s former subordinates about his alleged role in the stealing of gasoline worth $180,000 that was destined for the Titan Task Force he commanded between December 2016 and July 2018 in the western Choco province.

Other former subordinates reportedly testified Moreno and a colonel under his command extorted illegal miners in Choco and that the colonel returned a shipment of 10,000 gallons of gasoline soldiers had seized from an illegal armed group.

In a response, Moreno denied knowing about any of the reported investigations and stressed that he “didn’t have the faculties to interfere in the entries of that unit’s fuel assignments.

The commander said he met with “representatives from the mining sector,” but stressed that in these meetings “illegal group never took part.”

The revelations involving the 2nd Division commander come little more than a week after the arrest of the former 4th Brigade commander who had been promoted to become the National Army’s second in command.

Over the past two months alone, at least five top generals close to the army chief have been sacked over alleged corruption and ties to illegal armed groups.