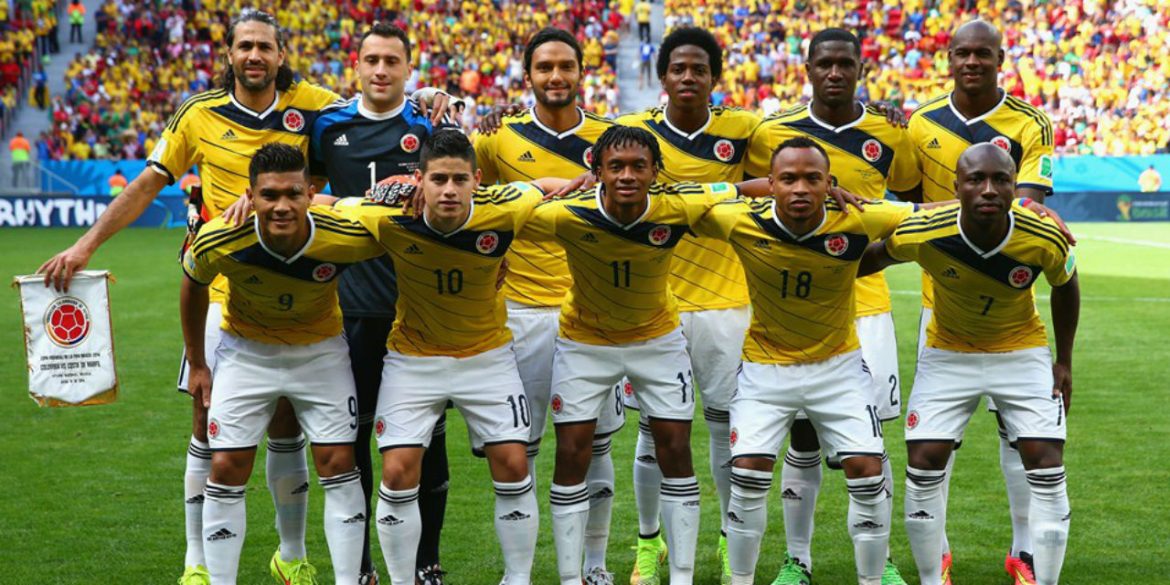 Colombia’s qualification and performance at the 2014 World Cup in Brazil brought an end to a 16-year drought.

A tame group stage exit at the 1998 World Cup brought down the curtain on what was regarded by many as a golden generation of football players in the South American country.

Retirements of household names such as Rene Higuita, Freddy Rincon, Carlos Valderamma and Tino Asprilla led to a barren period for the national team as they fell from the perch of being one of the most exciting teams on the continent.

With the team in transition, Colombia still managed to take advantage of home soil and win the 2001 Copa America, beating Mexico in the final.

Colombia subsequently missed out on qualification for three successive World Cups but the arrival of Argentine coach Jose Pekerman in 2012 marked a new dawn for “La Tricolor.”

The emergence of players like Radamel Falcao, Juan Cuadrado and later James Rodriguez coupled with the expertise of Pekerman gave Colombia the opportunity to re-emerge as a force in South American football.

While off the field, Colombia was still experiencing the horrors of an armed conflict, the drug-fueled violence and mafia shadow that had been cast over the teams of the 1990s was not present going into Brazil 2014.

The new generation of players went into the competition representing a much-changed Colombia on the world stage.

“There is the feeling in Colombia that this can be a golden generation,” commented El Tiempo journalist Jose Orlando Ascencio ahead of the tournament when speaking to Al Jazeera.

Colombia qualified for the 2014 FIFA World Cup after finishing second to Argentina in the CONMEBOL South American section of qualifying, ahead of Chile, Ecuador and Uruguay.

Brazil, as hosts, qualified automatically for the competition.

After finishing second in qualifying, Colombia went in to the competition as top seeds, drawn alongside Greece, Ivory Coast and Japan in Group C.

“Los Cafeteros” were however dealt a crushing blow in January 2014 when record goalscorer Radamel Falcao, who had scored nine of their goals in the qualifying campaign suffered a serious knee injury.

“El Tigre” was unable to make a sufficient recovery to take part in the tournament, leaving Pekerman without his talisman as they prepared to travel to Brazil.

Colombia opened the tournament on June 14 with a clash with Greece at the Estadio Mineirão in Belo Horizonte and took the lead within four minutes when Pablo Armero got on the end of a Juan Cuadrado cross to give Pekerman’s team the perfect start.

After a dominant and free-flowing performance in the first half, Colombia doubled the lead in the 58th minute when Teofilo Gutierrez tapped home from close range after Abel Alguilar flicked on a James corner.

James himself put the icing on the cake when he stroked the ball past Orestis Karnezis after good direct running from Cuadrado as Colombia sealed a comprehensive win and a perfect World Cup start.

Next up for Colombia five days later was the Ivory Coast at the Estadio Nacional Mane Garrincha in the capital Brasilia in a first ever meeting between the two sides.

After what was a dull first half, Colombia took the lead in the 64th minute when James Rodriguez powered home a header from a Cuadrado corner.

The Colombians put themselves in pole position six minutes later when James stripped the Ivory Coast of possession in the midfield before laying the ball onto Teofilo Gutierrez who slipped through for Juan Fernando Quintero to slot home.

The Ivory Coast rallied and pulled a goal back through a brilliant individual effort by Gervinho but it was too little too late as Pekerman’s side moved on to six points, securing qualification to the second round.

Buoyed by victories in the first two games, Colombia went into the final group game against Japan at the Arena Pantanal, stadium in Cuiaba on June 24 full of confidence as Pekerman shuffled the pack, taking the opportunity to rest some players.

It took just 17 minutes for “La Tricolor” to open its account when Cuadrado converted a penalty after Adrian Ramos was brought down in the area.

Japan leveled however on the stroke of half-time when Shinji Okasaki headed past Ospina from a Keisuke Honda crosss.

Colombia however, became rampant in the second half with James pulling the strings and setting up Jackson Martinez for a brace in the 55th and 82nd minute.

The then-Monaco playmaker sealed the victory with a goal of his own when he rounded the Japanese defense and finished with a delightful chip over the head of the out-rushing Eiji Kawashima.

Colombia’s Faryd Mondragon made World Cup history in the 85th minute when he was introduced to replace Ospina in goal, becoming the oldest player to appear in the competition at 43 years old, surpassing the record held by Cameroon’s Roger Milla.

Colombia squared off against South American rivals Uruguay in the round of 16 at the Estadio do Maracana in Rio de Janeiro hoping to take advantage of the absence of “La Celeste’s” star striker Luis Suarez who was banned for biting Italy’s Giorgio Chiellini.

While Colombia had the best goals-to-shots ratio in the lead up to the game, chances were hard to come by in the opening stages against a resolute, organized Uruguayan defense.

The game however sprung into life in the 28th minute when James took the ball down on his chest, swiveled and sent a thunderous volley off the underside of the crossbar and into the Uruguayan net in what was arguably one of the great goals of World Cup history.

The competition had seen the former Envigado attacker announce his arrival on the world stage and he grabbed a second in the 50th minute, finishing after an Armero cross was nodded down in the box by Cuadrado.

While Uruguay rallied, strong defense and a string of good saves from Ospina in the Colombia goal were enough to see Pekerman’s side through to the quarter-finals for the first time in history.

The Colombians were dealt the difficult task in the quarter-final of taking on hosts Brazil at the Estadio Castelão in  Fortaleza having never beaten the “Seleção” on away soil.

The hosts started the brighter and took the lead in the seventh minute when Thiago Silva found himself unmarked at the back post to turn the ball home past Ospina to the delight of the home fans.

While the Colombians failed to find the same rhythm with which they had played with in previous games, they battled back and had the ball in the net in the 66th minute when Yepes scrambled it to the net, only to see his effort ruled out for offside.

Things got worse in the 69th minute when Brazilian defender David Luis sent a breath-taking free-kick into the top corner of Ospina’s net to double the home side’s lead.

Colombia managed to reignite the tie in the 80th minute when James stuck away a penalty after Carlos Bacca was brought down in the box by Julio Cesar to register his sixth goal in five appearances.

That was as good as it got for Colombia however as Brazil held out in a fiery end to the game that saw star attacker Neymar stretchered off.

For Pekerman and his side, the dream of making it to the Wold Cup semi-finals ended as the hosts progressed for a last-four encounter with eventual winners Germany.

While reflections on golden generations of Colombian teams often take us back to the early 1990s, the days of Freddy Rincon, Valderrama and Asprilla, less is said of the 2014 team that achieved the nation’s greatest ever finish.

The loss of star striker Radamel Falcao was a bitter blow but the tournament marked the true arrival of James Rodriguez who captured the world’s attention with the quality of his attacking play, finishing with the tournament’s Golden Boot.

James became just the fifth player in World Cup history to score at every game in a finals, after György Sarosi of Hungary in 1938, Alcides Ghiggia of Uruguay in 1950, Just Fontaine of France in 1958, and Jairzinho in 1970.

The quality of his strike against Uruguay was later recognized when he collected the 2014 FIFA Puskas award for the best goal of the season.

After a 16-year absence from the world’s top table, the likes of Ospina, Cuadrado and of course Falcao in addition to James lifted Colombian football out of a long slumber to produce a World Cup performance beyond the expectations of many.

With many of the same players involved in this summer’s World Cup the question of whether this is a new dawn for Colombian football will surely be answered in Russia.