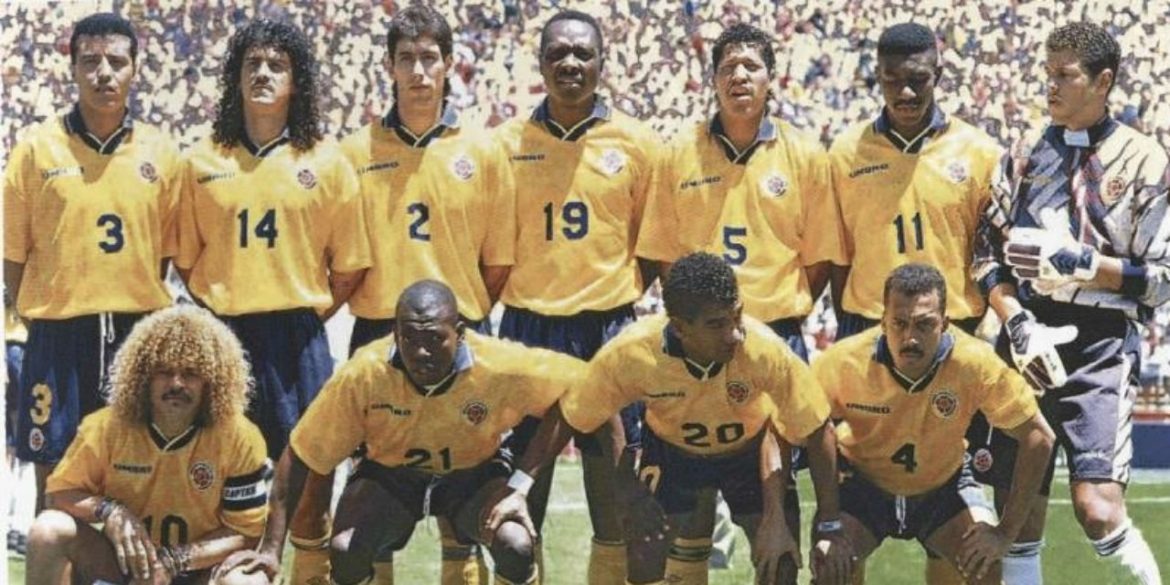 “Colombia is my favorite to become world champion,” … the words of three-time Brazilian World Cup winner Pele in 1993 after “El Tricolor” swept to a second successive qualification.

After an impressive performance in Italy in 1990 that saw Colombia reach the knock-out stages of the competition, hopes were high that the Andean nation could launch a major assault on World Cup glory in the United States in 1994.

The murder of drug kingpin Pablo Escobar on a Medellin rooftop in December 1993 brought relief to many and grief to some as the curtain came down on a long, bloody saga involving the cartel boss.

The death of Escobar did not bring an end to the violence, nor to drug trafficking as Colombians looked to the national team in the hope of shedding some positive light on the country at the upcoming World Cup.

Colombia was living a “collective feeling of belonging and nationalist ardor not seen since the war against Peru,” fought 60 years earlier, claimed El Tiempo newspaper.

This feeling however was soon extinguished in a tournament that turned out to be something of a tragedy both on and off the field.

On the December 5, 1993 Colombia took on two-time World Cup winner Argentina in the final CONMEBOL South American section of World Cup qualifying at the Estadio Monumental in Buenos Aires.

Before the game Argentina legend Diego Maradona taunted the Colombians, seeing the game as nothing but a mismatch, “La Albiceleste” never having lost a World Cup qualifier on home soil.

“You can’t change history, history shouldn’t be changed: Argentina up, Colombia down,” said the 1986 World Cup winner of the visitors before the game.

The Argentine legend was later filmed among 53,000 fans in stadium applauding Colombia off the field after humbling the home side 0-5 in what is regarded as one of the greatest ever displays in a South American qualifier game.

The win was enough for the Colombians to top the qualifying group and book a place at USA ’94 where they were drawn against the host nation, Romania and Switzerland in a favorable Group A.

After hitting the headlines worldwide for the demolition of the great Argentina in Buenos Aires, Colombia went into the first World Cup game against Romania on June 18 full of confidence that this could be the tournament for a golden generation of players to triumph.

With the now-experienced talents of Andres Escobar, Carlos Valderrama, Leonel Alvarez and the explosive striker Faustino Asprilla within the ranks, Colombia started the encounter well at the Rose Bowl stadium in Pasadena.

Romania however, took the lead in the 16th minute as AC Milan striker Florin Raducioiu took on three defenders before firing past Colombian goalkeeper Oscar Cordoba.

Romania’s captain Gheorghe Hagi made it 2-0 when he caught Cordoba off his line and dipped a looping effort over his head into the net.

Adolfo Valencia pulled a goal back for the Colombians in the 43rd minute when he headed in from a Wilson Perez corner but Raducioiu ensured a shock defeat for “Los Cafeteros” when he scored his second in the 88th minute to make it 3-1 in front of a crowd in excess of 91,000 people.

Francisco Maturana’s men went into the second group game against the USA four days later knowing that a similar performance to that against Romania would not be enough if they wanted to progress to the second round.

Again the Colombians struggled to find the devastating rhythm with which they had played in qualifying and found themselves behind in the 35th minute when defender Andres Escobar deflected the ball into his own net for what would prove to be a fatal own goal, giving the US a shocking 1-0 lead.

In the 56th minute, the US doubled the lead when Earnie Stewart slotted the ball past Oscar Cordoba after a fine move involving Tab Ramos.

Even though Adolfo Valencia scored a late goal for Colombia, Maturana’s side had failed to perform again in a defeat that devastated the nation.

In the aftermath of the defeat to the United States, Colombia’s reaction was one of devastation as the golden generation of players saw their dream of World Cup glory evaporate.

“If we aren’t capable of beating the gringos, then we aren’t worth anything,” said one devastated fan to El Tiempo after the game.

An official from the Colombian soccer federation described the mood within the camp as “worse than depressed but not suicidal” as they sought to regroup for the final game against Switzerland.

Rumors later circulated surrounding alleged cartel influence on the Colombian team in the build up to the game against the US.

“Earlier in the day, in what violence-hardened Colombians call ‘terrorismo telefonico’ a group identified by La Prensa as ‘a shadowy death squad’ telephoned and faxed death threats to Maturana and to one of his wing-backs, Gabriel Jaime Gomez,” reported the New York Times.

“There will be bombs in your house and in Gomez’s house, if you put him on the field,” the caller reportedly added.

Gomez, who was the brother of Maturana’s assistant played no part in the game amid the threats with the influence of outside factors clearly felt in the Colombia dressing room.

Anecdotes circulated years later in the media claiming that the team had dined with the Cali Cartel before leaving for the World Cup during which the players were offered cash bonuses for their performance.

While the veracity of many of the tales surrounding  behind the scenes influences were never fully clarified, this shadow would have explained the below par performances of one of the tournament favorites.

Colombia went into the final group game on June 26 hoping for a victory against Switzerland, coupled with a defeat for Romania against the US that would be enough to secure third place in the group and qualify as one of the best third-place finishers.

A Herman Gaviria header in the 44th minute gave Colombia a 1-0 lead going in at the break and a late Harold Lozano effort sealed a 2-0  victory over the Swiss.

The victory however was in vain as Romania’s 1-0 defeat of the US meant that the Colombians finished bottom of the group and were eliminated from the tournament.

For many Colombian fans, elimination in the group stage of the 1994 World Cup was tragic enough but what was to follow cast a dark shark shadow over the nation.

Colombia manager Maturana reportedly informed the players that they could spend some more time in the US in the aftermath of the competition to allow tensions to ease at home.

Atletico Nacional center-back and scorer of the own goal against the host nation, Andres Escobar opted to return to his native Medellin immediately to face a disappointed public.

After being involved in a verbal altercation while leaving a local nightclub, the defender was gunned down, succumbing to his injuries later in hospital.

While speculation became rife as to the reason behind the attack, the nation mourned the death of one of its most promising footballing icons.

The 5-0 hammering of Argentina in qualifying turned out to be the pinnacle for this team with USA ’94 best forgotten as it ending in tragedy, in more ways than one.