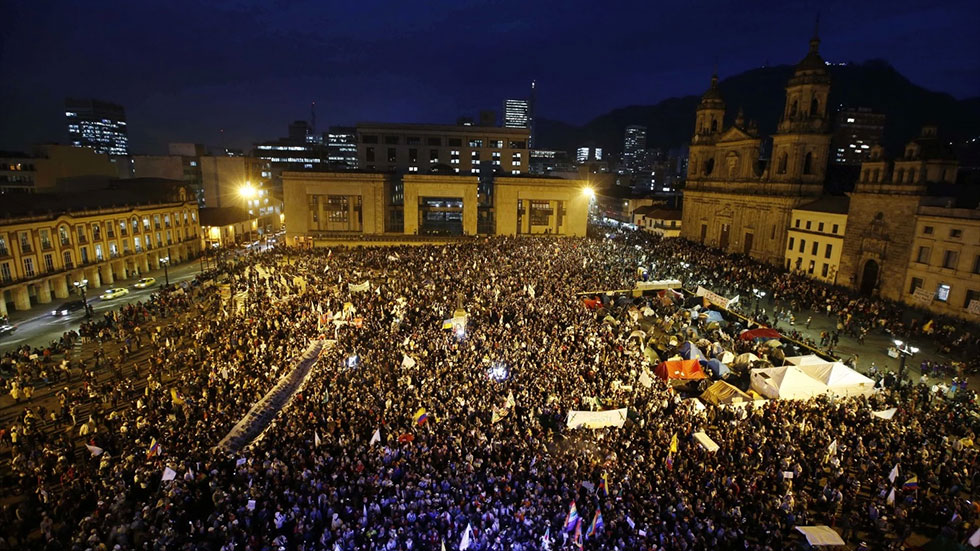 Thousands of farmers, indigenous activists and students marched in cities across Colombia on Wednesday to demand a peace deal between the government and leftist rebels not be scuttled.

It’s the second time in a week that Colombians are taking to the streets to support the accord signed last month with the Revolutionary Armed Forces of Colombia and now hanging by a thread.

In Bogota, victims of the decades-long conflict carrying photos of dead loved ones were greeted by well-wishers handing white flowers symbolizing peace.

“We victims are in a state of limbo, we need the accord now,” said Diana Gomez, 38, whose activist father was killed a decade ago. She said her father’s murder remains unsolved — one of a flood of unsolved crimes committed during the bloody conflict that claimed the lives of 220,000 people and left almost 8 million displaced.

President Juan Manuel Santos, winner of this year’s Nobel Peace Prize, is in talks with the opposition and FARC to make adjustments to the accord after it was narrowly rejected in a referendum six days after it was signed in front of world leaders.

But it’s not clear he can save the deal as opponents push for stiffer penalties for rebel leaders widely loathed by Colombians. Under the terms of the accord signed Sept. 26, guerrillas who confess their war crimes will be spared time in jail and instead ordered to carry out community development work in areas hard hit by the conflict.

“This isn’t a question of cosmetic changes,” former President Alvaro Uribe, who led the campaign against the peace deal, said Wednesday after delivering to government officials a list of proposals that he said will strengthen and provide broader support for the accord. “In a country of institutions like Colombia, transitional justice can’t consist of failing to punish those responsible for atrocious crimes.”

The FARC leader known by his nom de guerre Timochenko tried to put on a brave face Wednesday, saying that the guerrilla group is open to making adjustments even if it’s not willing to start negotiations again from scratch.

“Personally I think it may have been good that this happened,” Timochenko, referring to the referendum loss, said in a rare, hour-long interview with Caracol Radio. “It allows us to clear up many doubts and especially commit the important segment of the Colombian society that didn’t vote, more than 63 percent, to take an interest in this history-making event.”

Wednesday’s march on the Plaza Bolivar, adjacent to the congress and presidential palace, appeared to be larger than last week’s rally, a sign of how politically apathetic Colombians have been jolted into action by the fading prospects for peace. In recent days, the Plaza has been overtaken by dozens of tents set up by die-hard peace activists and on Tuesday was blanketed with a giant, white shroud containing the names of almost 2,000 victims of the conflict stenciled in ash.

Santos has applauded the outburst of activism, and on Wednesday reiterated the need to seek a quick solution to the impasse so that a ceasefire in place doesn’t unravel.

“The great majority of people have asked me to find a solution son because uncertainty is the enemy,” he said in televised address.