With a ticket freshly punched to Brazil in 2014, the Colombian national team will arrive in Asuncion on Tuesday evening to take on Paraguay in their World Cup Qualifier.

After last Friday’s electric three-goal comeback against Chile, which guaranteed Colombia its first World Cup finals appearance in 16 years, Tuesday’s game mainly represents a chance for Colombia to confirm their position as the second-best team in the qualifiers. Paraguay are floundering just a spot above bottom-placed Bolivia. Although a win wouldn’t be enough for Colombia to catch Argentina at the top of the group, a tie would seal second place for “los Cafeteros,” unless Ecuador miraculously manage to put nine past Chile away from home.

Instead, Colombia will be treating its final qualifier as the last chance before Brazil to get competitive experience for some of its players and figure out the lingering holes that gave up three goals on a shockingly flat first half performance at home Friday.

For the first time since the start of qualifiers, head coach Jose Nestor Pekerman announced his starting lineup heading into Tuesday’s matchup, a lineup that features several big changes from Friday’s starting 11.

With Camilo Zuñiga still out with an injury, and Juan Guillermo Cuadrado suspended on accumulated yellow cards, recent call up Santiago Arias will see his first cap in the “Tricolor” uniform at right back.

In what might be more a show of confidence than a tactical adjustment, Christian Zapata will replace Amaranto Perea alongside Mario Yepes at centerback. Perea played a strong game against Chile, with Yepes getting thoroughly exposed by Alexis Sanchez.

Pablo Armaro will stay in his standard left back role, after assisting on Colombia’s first goal Friday but struggling to stay disciplined against a Chilean side that found space down the wing throughout the first half.

The biggest shifts come in the midfield. Gone is the more defensive Abel Aguilar, who looked generally slow and ineffectual during his limited start Friday and has come out early in each of Colombia’s last four qualifiers. Atletico Nacional’s Stefan Medina will also return to the bench, after being taken out at halftime after a sloppy 45 minute run against Chile.

Instead, Freddy Guarin and Macnelly Torres will start in front of Carlos Sanchez in a midfield that has lacked both pace and composure in recent weeks. The switch to a more aggressive, offensive combination brought an immediate shift in tone Friday. Torres especially was instrumental in the three goal turnaround, with Guarin’s ability to cover space on the wing letting Torres and James Rodriguez orchestrate from the middle.

Rodriguez is the only hangover from last game’s front three. He started Friday’s game out on the right opposite Teofilo Gutierrez, but moved around throughout the game until he was able to find space in the middle in the second half. Rodriguez has established himself as the pulse of the Colombian attack, and it will be interesting to see whether Pekerman leaves him out on the wing again, or lets him drift central earlier in the game, where he’s generally able to enjoy a lot more of possession.

Carlos Bacca was another influential sub for Pekerman’s side. He came on for Carlos Sanchez once the Chileans went a man down, but Tuesday he’ll be playing a role similar to the one Pekerman has laid out for Teofilo Gutierrez. Gutierrez, typically a front striker, hasn’t really shown much as a connection player behind Radamel Falcao. He tends to be clumsy with the ball at his feet, and mostly prefers to be played through or sent in crosses. Bacca, on the other hand, is much more used to creating with his face to the goal, and lead some dangerous counterattacks Friday toward the end of the game.

He’ll be starting behind Jackson Martinez, probably the best striker in the world not starting for his national team. Martinez has been on an absolute tear in club soccer, dating back to the beginning of last season. But Pekerman has been reluctant to give the big Porto man an opportunity next to Falcao. Tuesday he’ll have a chance to work himself into the starting lineup over Gutierrez, who has been largely inconsistent throughout the qualifying game, despite an impressive goal record and a huge tally Friday that started the Colombian comeback.

With a bench full of talent, a more proactive approach to the midfield and a Paraguay team that has given up 25 goals in qualifiers so far, there’s no reason to expect a drop off from the Colombians, who have a chance to finish up the qualifying campaign in style after a fairly weak string of results. 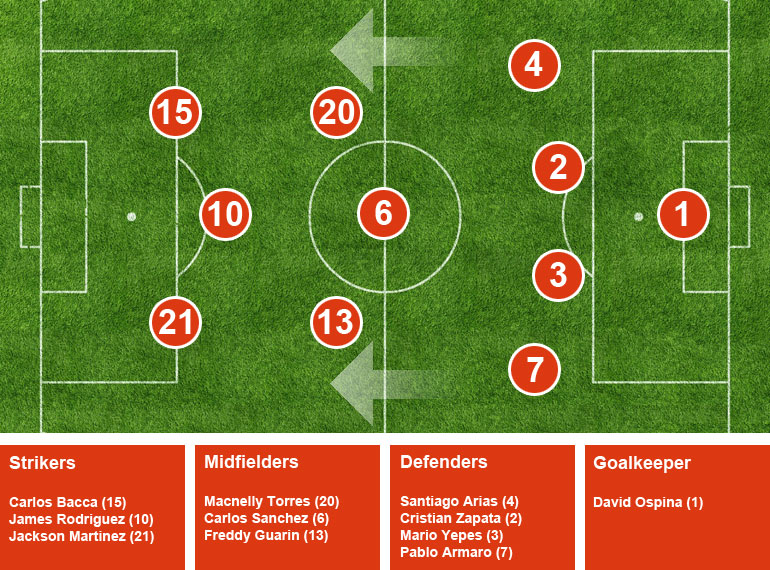