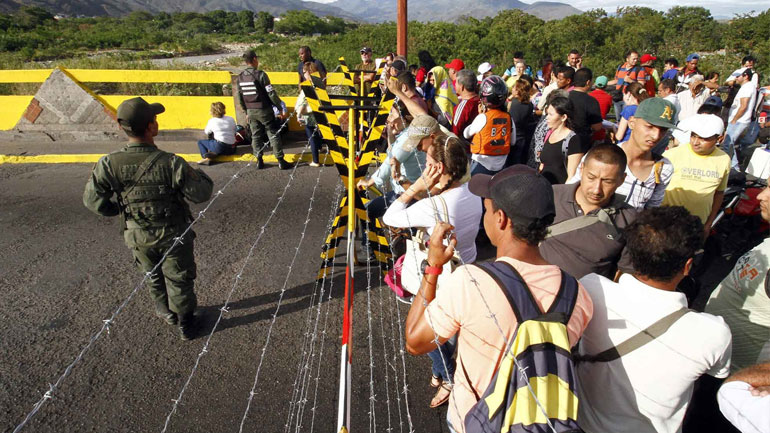 After a week of escalating tensions between Colombia and Venezuela, the United Nations called on the two neighbors to maintain “constructive dialogue” while the Organization of American States called a special meeting for Monday.

The international involvement follows an agitated week in which the sudden deportation of more than a 1,000 Colombians from Venezuela and the voluntary displacement of more than 4,000 other deteriorated to the point both countries on Thursday recalled their ambassadors.

The United Nations High Commissioner for Human Rights called on both sides to work to resolve the crisis, and put extra emphasis on Venezuela’s responsibilities in the current situation.

“We urge the Venezuelan authorities to ensure that the human rights of all affected individuals are fully respected, particularly in the context of any deportations,” said Rupert Colville, spokesman for the UN high commissioner.

Colombia’s foreign minister, Maria Angela Holguin, began the process to seek help for the multinational community, asking UNASUR and the Organization of American states (OAS) to convene an urgent meeting to address the crisis.

The OAS responded positively and scheduled for a special meeting of foreign ministers for Monday in which the ministers will discuss “the humanitarian situation of Colombian citizens in the Bolivarian Republic of Venezuela in light of the recent deportations, which has been brought about by the way in which those Colombian citizens are being deported from and forced to leave.”

It is unclear whether Venezuela’s foreign minister, Delcy Rodriguez, will attend this meeting as she has insisted on first traveling to Asia before attending the diplomatic fall-out of her country’s unilateral decision to deport Colombians amid attempts to curb smuggling in the border region.

UNASUR, the organization of South American states, would be the more favorable body for Venezuela, according to Oliver Kaplan, a professor of International Relations and Human Rights at the University of Denver in Colorado.

UNASUR “is part of an effort to empower South American countries to promote cooperation on their own and resolve their own disputes, without the US or other nations being directly involved,” Kaplan told Colombia Reports.

Venezuela has long had strained relations with Washington, but these worsened after the American government alleged that top government officials were involved in international drug trafficking activities.

“The UNASUR approach could provide a forum for a more cooperative, diplomatic resolution to the crisis,” said the scholar.

However, taking the issue to UNASUR is controversial among Colombian leaders. Its current secretary general is Colombian ex-president Ernesto Samper, who who on Monday spurred anger confirming that Colombian paramilitary forces were active in Venezuela while urging the socialist-run country to suspend the mass deportation of Colombians.

While the presence of neo-paramilitary drug traffickers in Venezuela has repeatedly been proven by the arrest of multiple top leaders in the neighboring country, Colombian political leaders appeared offended and even proposed to leave the Union of South American Nations.

Furthermore, Venezuela’s Foreign Minister Delcy Rodriguez said Friday no meeting could occur before September 8, as she refuses to suspend the scheduled state trip to Vietnam and China, two important economic allies of Venezuela’s socialist-run government that is facing a major economic crisis.

Colombia’opposition, led by former President Alvaro Uribe, urged that the issue instead be taken up by the Inter-American Commission on Human Rights, claiming Venezuela’s actions have violated the human rights of Colombian citizens living in the neighboring country.

“Going to the IACHR could represent a more punitive, non-cooperative approach to resolving the crisis since the Colombian conservatives have called for precautionary measures, which are helpful for drawing attention and planning a solution, but is also a form of shaming,” Kaplan said.

The IACHR itself said Friday it was “deeply concerned” over the “arbitrary deportation” of Colombians from Venezuela.

“The Commission is extremely concerned about the circumstances surrounding the Colombian nationals who are living or who lived in the state of Tachira following the declaration of a state of emergency and closing of the border by the Venezuelan State,”said Felipe Gonzalez, the IACHR’s Rapporteur on the Rights of Migrants.

“The information at our disposal indicates that these deportations are apparently being carried out arbitrarily, without respecting due process guarantees for migrants, the principle of family unity, the best interests of the child, the right to personal integrity, or these persons’ right to property,” said Gonzalez.

Additionally, “the manner in which these deportations are being carried out indicates that these people are the victims of multiple human rights violations and that they are being expelled collectively, which runs completely counter to international law. We in the Commission are also concerned that among those deported are refugees and other persons requiring international protection and in respect of whom the Venezuelan State has a duty to respect the principle of non-refoulement.”

Consequently, “the IACHR urges the Venezuelan State to put an immediate stop to any collective, arbitrary, and/or summary expulsion” and to “adopt measures to ensure respect for all the rights of the persons caught up in this situation, including their right to live free from all forms of discrimination and violence.”