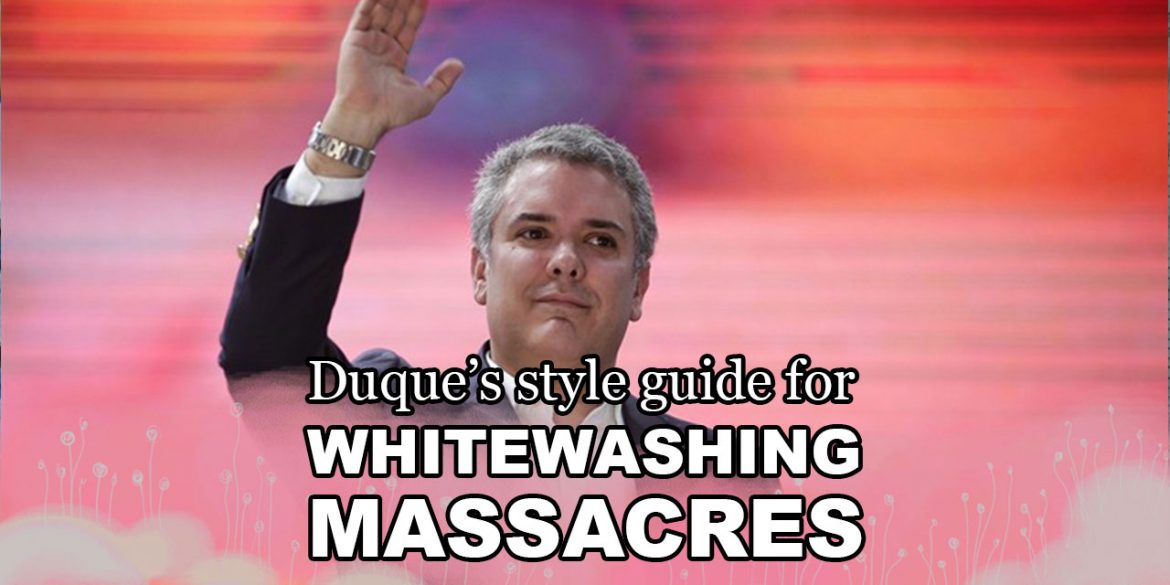 Colombia’s President Ivan Duque-proposed to use the euphemism “collective homicide” instead of “massacre,” but was ignored after two particularly violent weeks.

Duque coined the euphemism used by the military earlier this week after five massacres and several other mass killings shocked the country and sparked fears of a relapse to the extreme violence of the beginning of the century.

Massacres had all but disappeared after Duque’s predecessor, President Juan Manuel Santos, closed a peace deal with leftist FARC guerrillas in 2016 that is fiercely opposed by the president’s far-right Democratic Center party.

Defense Minister Carlos Holmes Trujillo subsequently repeated the term, denied any responsibility in the deterioration of public security and vaguely blamed “drug trafficking” for the massacres.

The’parents of victims of a massacre in the southwestern Nariño province blasted authorities for implying their children were somehow associated with drug trafficking.

None of the massacres this month appeared to be related to drug trafficking in any way, but Trujillo tried to use the massacres to seek support for his so-far failed attempts to resume the aerial fumigation of coca.

Independent media blasted the government for trying to whitewash the extreme violence and even use it to promote unpopular policies.

Unlike during the conflict, most of the country’s mass media ignored the president’s suggestion and continued to use the word “massacre.”

Several studies conducted during the country’armed conflict indicated that the mass media’s use of euphemisms in cases of violence committed by paramilitaries severely distorted public perception of the current reality in Colombia.